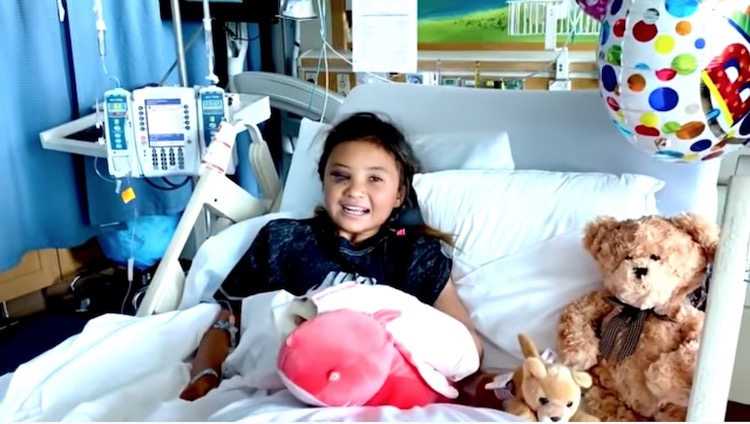 British skateboarder and social media star, Sky Brown is in recovery after suffering a horrific fall that left her with skull fractures, a broken left wrist, and a broken hand. The 11-year-old athlete and her brother Ocean have many loyal fans on social media.

In a newly released video, shared on YouTube, Brown can be seen attempting to skateboard from the top of one, very high vertical ramp to another. With several feet between the two ramps, Brown comes up short and falls, helplessly to the concrete floor.

In the video, Brown describes the incident as her “worst fall.”

“I held her in my arms and she bled helplessly moaning in and out of consciousness waiting for the helicopter to take her to the hospital,” Brown’s father, Stewart wrote in an emotional post on Instagram.

“We spent the night sick and terrified not knowing if Sky was going to make it through the night, as the ICU team tried to get her conscious and kept her alive,” he added.

In addition to showing the absolutely gut-churning fall, the video also includes footage of a helicopter and ambulances arriving to the scene to transport the skateboarder to the hospital.

“I don’t usually post my falls or talk about them, because I want people to see the fun in what I do, but this was my worst fall, and I just want everyone to know that I’m okay,” Brown says, after the video abruptly cuts to a shot of her in a hospital bed.

“It’s okay to fall sometimes. I’m just going to get back up and push even harder,” she continues with difficulty, “I know there’s a lot going on in the world right now and I want everyone to know that whatever we do we’ve got to do it with love and happiness.”

People points out that Brown credited the safety gear she was wearing for saving her life in the YouTube video’s description.

“My helmet and arm saved my life. This will not stop me. I am going for gold in Tokyo 2021. Stay strong. Stay positive,” the description said.

The Tokyo Summer Olympics which has been postponed because of the coronavirus pandemic will be the first to include skateboarding.

Stewart told the BBC that his daughter was “lucky to be alive” after the horrendous accident.

“Her Doctors and the trauma team say it’s a miracle how well she is dealing with the pain and recovering incredibly fast,” Stewart said on Instagram. “They said it’s shocking and believe it’s because of her grit, positivity and attitude.”

He closed by writing: “Thank you to the heroes that are the doctors, nurses and hospital staff that have tirelessly worked on her and helped her get to this point.”