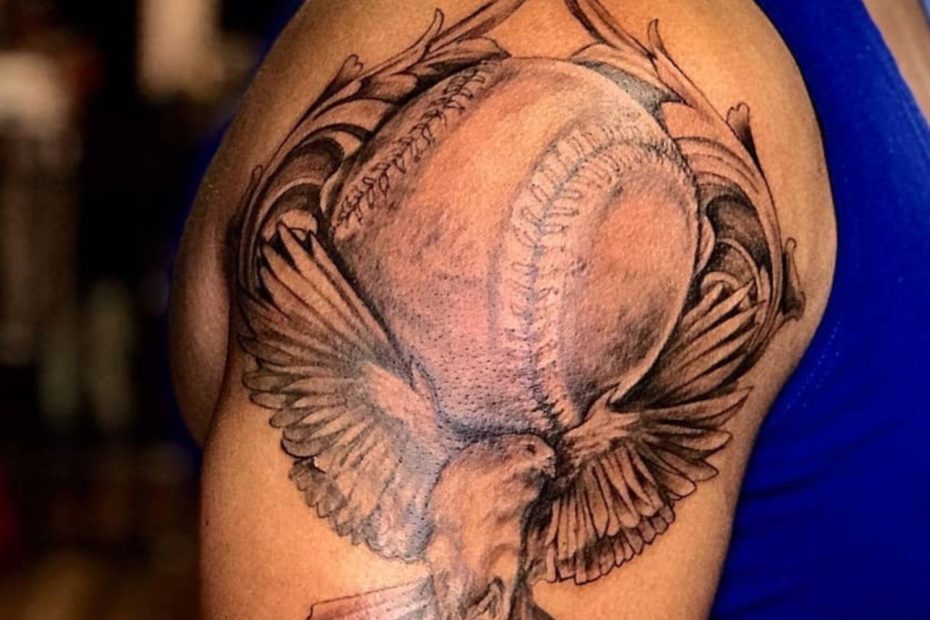 20 Tattoos That Any Baseball Lover Could Rock

20 Tattoos That Any Baseball Lover Could Rock

Sports are often looked at as religion by some. Whether you just love the game, love the atmosphere, or you are a die-hard fan of a specific team, nothing is quite like being a sports fan. And there is really nothing like heading out to the ballpark to watching your favorite players take to the diamond with a hot dog in one hand and an ice-cold drink in the other.

Then there are fans who use their own bodies to pledge their allegiance to a specific sport, team, or player. And those are the fans we are going to be talking about here. Have you ever considered getting your favorite team’s logo, or your favorite player’s face, or even the entire stadium which houses your favorite team on your body?

Well, if you have, you’re in the right place. Below are 20 tattoos for baseball lovers that could help inspire your next piece of body art. Take a look:

The Skin of a Baseball Morphing Into a Rose

How creative is this? Whether you love both baseball and flowers, or you’re just looking for something more unique than just a plain old baseball tattoo, this cool design is definitely something to consider.

Now, this is unlike anything we have ever seen. If you’re working on a sleeve or a calve tattoo this would be an impressive addition to your arm or leg. And the realness of the zone lines…incredible!

A Simple Diamond, Baseball Diamond, That Is

This tattoo focuses solely on home plate and may represent that of a lifelong player of the game. So if you have played baseball for a while and you want to represent that with a simple, dainty piece of body art, this one is for you!

This is quite the nod to one of the best to ever play the game. Ken Griffey Jr. played the majority of his 22-year career in the outfield for the Seattle Mariners and the Cincinnati Reds. In 2015, he was inducted into the Hall of Fame.

The Logo for the MLB

What better way to show the world you love all of professional baseball than with the official logo of the MLB tattooed on you some where.The fun thing with this tattoo is you can do it one of two ways, in full color or black and white!

Now this is also a unique way to show your love for the game and it’s also pretty subtle as well. In fact, it almost looks as if you had been hit by a baseball, which again, is pretty creative.

The Ivy Wall at Wrigley Field

Where are all my Chicago Cub fans at? How cool is this rendition of the ivy-covered walls that have become a staple on the outfield walls at Wrigley Field? That, along with the1979-93 throwback logo incorporated into the tattoo, proves you’re a true Cubbies fan.

Another baseball great makes for a great tattoo. The late Joe Di Maggio was Mr. Baseball for most of the 1940s when he was a three-time MVP and won nine World Series championships during his 13 years. He too is now in the baseball Hall of Fame.

As the first African American baseball player to play in the MLB, having a tattoo of Jackie Robinson represents so much more than just a love for him or for the sport as a whole.

Cincinnati Reds But Make It Creepy

If you are a big Cincinnati Reds fan, but don’t just want the regular old logo tattooed on you, you can give it a spin and make it sinister like this one, or happy-go-lucky if you’re in that kind of mood instead.

The infinite sign has become quite the popular tattoo. However, including this Houston Astros twist makes it unlike the other infinite tattoos you might seem elsewhere.

A Majestic Bird Carrying a Baseball

You certainly wouldn’t see this tattoo around often. Between it’s uniqueness just as a concept, there are hundreds of ways to make it your own, depending on the bird you would choose and how you want it to hold the ball, the possibilities are endless.

Your State and Your Baseball

This doesn’t just have to be a tattoo for baseball fans, but if you’re from Florida and love football, outline your state and add a football in it. Feel free to get creative.

This is another creative twist on the usual infinity tattoo. And this one accurately shows a persons love of baseball. And hey, if you love tennis or basketball, this tattoo would work too.

Sweet, simple, and to the point. When it comes to sports tattoos, getting your favorite teams mascot tattooed on you is a great way to show your support.

Grab Your Mitt and Your Ball

Tattoos can be pretty intricate and this ball in glove tattoo is one of them. How real does this ball and glove body art look?

Are you a big Babe Ruth fan? “Never let the fear of striking out keep you from playing the game,” is one of the post popular quote to ever come out of baseball. And as this photo shows it makes for a great tattoo.

Now, this is incredibly. It is the entire Los Angeles Dodgers stadium complete with the skyline and the Dodgers logo in the background. And for a nice added touch, the sun beaming down on the field is a baseball.

Vin Scully. Now this shows you’re a true lover of baseball… Dodger baseball this year. Scully made a name for himself during his 67 years as a sportscaster. His voice became a household name has he called hundreds of Dodgers games from the booth of the people at home. He officially retired in 2016.

We Pray to the Baseball Gods

Like we said, some people look at sports as a religion and this tattoo just proves that.

1 thought on “20 Tattoos That Any Baseball Lover Could Rock”