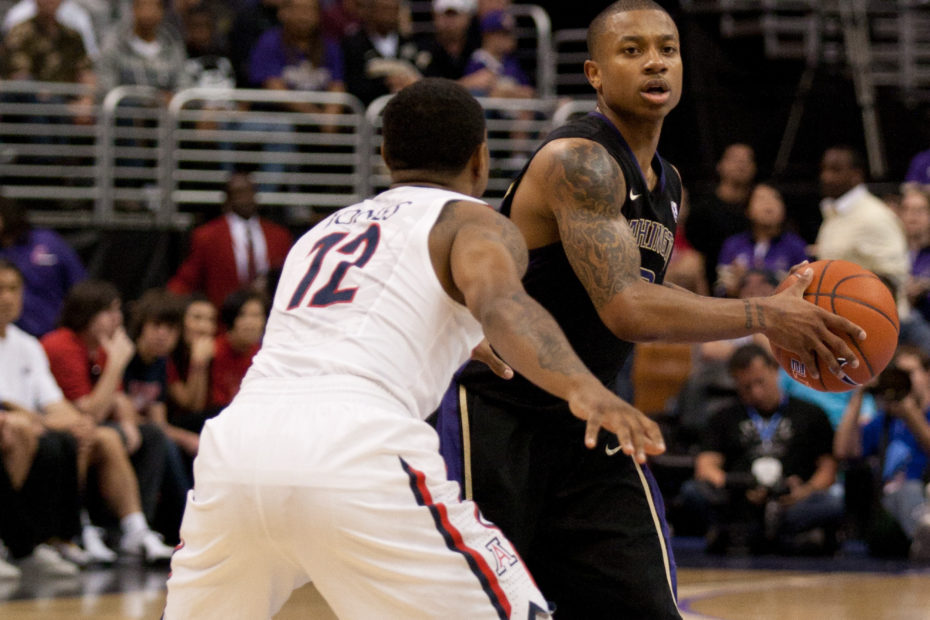 Ranked: The 25 Shortest Basketball Players of all Time

The majority of NBA players have impressive heights, which is no surprise considering the advantage that height gives in the difficult game of basketball. Short players being able to hold their own against teammates that are 1-2 feet taller than them makes it even more impressive when they outperform their peers.

Following is a list (ranked) of the shortest basketball players of all time, along with their height and information in regards to their NBA affiliation. For reference, the average NBA player is 6 feet and 7 inches tall.

The shortest NBA player of all time is Muggsy Bogues who is only 5’3″. Despite his height (which definitely set him at a disadvantage), Muggsy Bogues played a jaw-dropping 14 seasons between the Washington Bullets, Charlotte Hornets, Golden State Warriors, and Toronto Raptors. Another shocking factor that led to much of his notability was swinging a position in the first round of the draft in 1987. Bogues, occasionally, even dunked, showing off his incredible vertical jump capabilities. His vertical was 44.3 inches, with the average NBA vertical sitting at 28 inches.

At 5’5″, Earl Boykins played in the NBA for 13 years between the New Jersey Nets, Cavaliers, Nuggets, Bucks, Clippers, Warriors, WIzards, Hornets, Rockets, and Magic after being drafted in 1998. His career high was when he dropped 32 points in a single game – an amazing feat for a player of hist stature surrounded by giants. He is the shortest player in NBA history to drop more than 30 points in one game.

Mel Hirsch, who was 5’6″ played only one season in the NBA, and that was with the Boston Celtics in the 1946-1947 season. He held the record for the shortest player to ever play in the NBA for 40+ years, until Muggsy Bogues was drafted.

Standing at 5’6″, Spud Webb spent 12 years in the NBA with the Atlanta Hawks, Kings, TImberwolves, and Magic. Webb holds bragging rights to a slam dunk contest win, an NBA ring in 1990, and placed in the top 20 for assists for numerous seasons.

Charlie Criss, aka “Little”, is 5’8″ and spent 8 active years in the league. With an impressive free throw percentage of 89% in 1990-1991, Charlie Cross spent his career honing his skills for the Hawks, Bucks, and Clippers.

At 5’7″, Greg Grant was a leader in assists during his time playing for the 76ers, Suns, Nuggets, Knicks, Hornets, and Washington Bullets from the time he was drafted in ’89 to his retirement in ’96. He now has his own basketball program and seems to be enjoying the fruits of his labor.

Keith Jennings, who was 5’7″, spent three years with the Golden State Warriors from 1992 to 1995. He recently passed away on February 13th of this year.

The 8th shortest player to ever play in the NBA, Red Klotz, is 5’7″. He is well remembered for his red hair, knee pads, and height. He played only one year with the Baltimore Bullets, and they won the championship that year.

At 5’7″, Wataru Misaka played for a single year for the New York Knicks and even competed in the 1976 NBA All-Star Game. With Misaka being of Japanese heritage, he became the first non-white person to play professional basketball in 1947. He lived to be an incredible 95 years old.

Monte Towe of the Denver Nuggets was 5’7″ and played in the NBA for two years. Known for his passion and aggression, Towe was able to make a name for himself in the NBA despite his height.

Standing at 5 feet and 8 inches, Dino Martin is well remembered for his two years with the Providence Steamrollers, a now long dead NBA team from the early days of the league. He was the first player to ever score more than 40 points in a single match.

Ranking as the 12th shortest player of all time, Willie Somerset was 5 feet and 8 inches tall.He spent 4 years in the NBA between the Bullets, Mavericks, and Nets. In 1968, he was recognized as one of the most “Oustanding Young Men of America.” Like Michael Jordan, Somerset also had an interest in baseball and became an amateur baseball player after his retirement from the NBA.

Howie Carl, who was 5’9″, played for only one year with the Chicago Powers, another extinct NBA team from the glory days. Though he wasn’t quick and did not possess an impressive vertical, he had an extremely quick and accurate catch and release that made him a dominant shooter and passer. Despite his physical limitations, Carl has gone down in history as one of the best long-distance shooters ever produced by Chicago.

Standing at 5’9″, Charlie Hoefer competed for two years under the Toronto Huskies and the Boston Celtics. He was born in Germany and was often referred to as “Dutch” by his teammates and opponents from ’46 to ’48.

At just 5’9″, labelled by the NY Times a “chunky sharpshooter”, Lionel Malamed has become a cultural icon, but only played in the NBA for a year. He was drafted in 1948 by the Rochester Royals and spent his only season split between the Royals and the Indianapolis Jets. He is remembered in the CCNY Hall of Fame, and the Alumni Varsity Association still awards a Lionel Malamed Scholarship every year in his memory.

10 More of the Shortest Players in Basketball

Rankings at the 16th shortest on this list and one of the oldest basketball players and a member of the Pittsburgh Ironmen, Ed Melvin was 5’9″ and only participated in the NBA for a single year. However, he managed to score a jaw dropping 281 points, and hasn’t been forgotten by NBA historians.

Calvin Murphy is 5’9″ and played for a long 13 years in the NBA. He spent his career among the San Diego Rockets and Houston Rockets. He is a Naismuth Memorial Basketball Hall of Famer and won the J. Walter Kennedy Citizenship Award in the 1978-1979 season.

Standing at 5’9″, Angelo Musi fought hard in the NBA for three years and spent his time with the Philadelphia Warriors. His team won the Championship in 1947, and he was the captain of the team when the Warriors achieved this victory. He is another of the oldest players on this list.

Ralph O’Brien, who was 5 feet and 9 inches tall, score 848 points over the course of his 2 year NBA career with the Indianapolis Olympians a, Fort Wayne Pistons, and Baltimore Bullets (all of which have ceased to exist).

At 5’9″, Nate Robinson was able to hold his own despite his short stature, even against opponents such as the late and legendary Kobe Bryant. He competed in the NBA for 11 years and was even able to claim a championship in 2013. He spent his time in the league playing for the Knicks, Bulls, Celtics, Nuggets, Warriors, Clippers, Thunder, and Pelicans. Like many bored and retired professional athletes, Robinson recently scratched his sports itch by trying his hand in boxing.

Gene Rock who was 5’9″ and another player from the olden days of the NBA played for only one year and did not perform very memorably. He found his passions with the LAPD and eventually became a captain that retired with honors in 1979. He, unfortunately, lost his life to cancer in 2002 but lived a long and fulfilling life with diverse life experiences.

At 5’9″, Yuta Tabuse is in the 22nd position on this list of the shortest players in NBA history. He played for just one year with the Phoenix Suns in the 2004-2005 season.

Isaiah Thomas, perhaps the most successful and well-known player on this list, is just 5 feet and 9 inches. He had a successful and long basketball career, spanning 10 years with the Kings, Celtics, Suns, Wizards, Lakers, Cavs, Nuggets, and Pelicans. Thomas was able to bag a championship in 2016 with the Boston Celtics and is perhaps best remembered for his performances with Boston.

Standing at only 5 feet and 9 inches, still 10 inches shorter than the average NBA player, Kay Felder never let this physical disadvantage stop him. He played for a few years with the Cavs, Bulls, and Pistons, and called it quits to play for the Chines Basketball Association. He has since retired from basketball entirely.

The last on our list, Chris Clemmons, is also 5’9″ and the only active player on this list. Though he only played one season with the Rockets due to suffering an Achilles injury, he was dunking again in no time and performing in various professional leagues.

It just goes to show that with some hard work and determination, anything is possible!