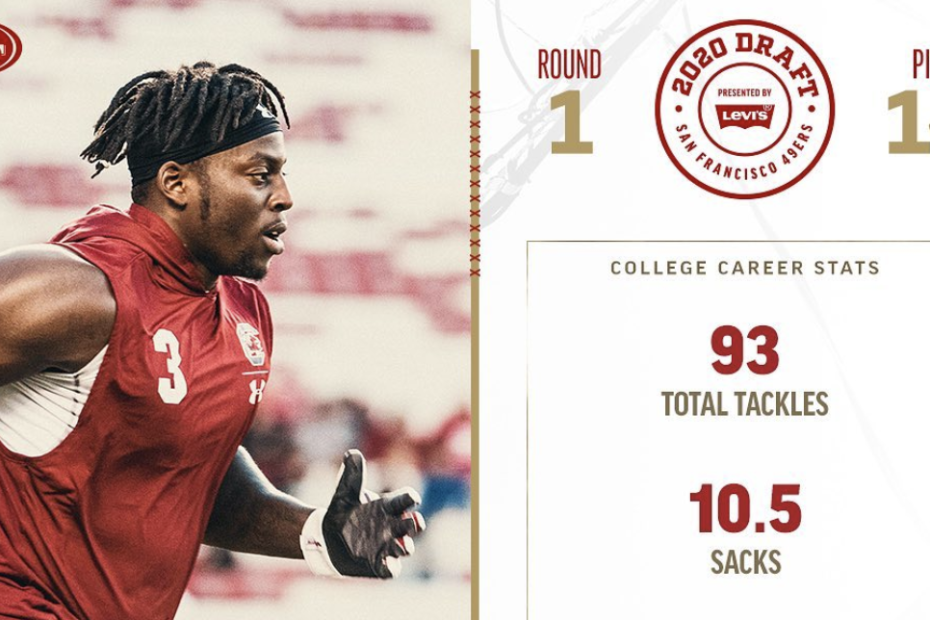 49ers Get 2 First Round Draft Picks, Coming Off of a 2nd Place Last Season

49ers Get 2 First Round Draft Picks, Coming Off of a 2nd Place Last Season

While rebuilding teams like the Bengals and Chargers usually come out of the first round with the best college prospects, it is not common for an elite team to come out of the draft with elite players. However, on Thursday night, the San Francisco 49ers did just that.

The 49ers started out the night with the 13th pick, which they received from the Colts in exchange for defensive lineman DeForest Buckner, and the 31st pick. The Niners did not have another pick until the 5th round.

However, during the draft, the 49ers general manager John Lynch made the crunch-time decision to trade their 13th pick (and a 7th rounder) to the Tampa Bay Buccaneers in exchange for the Bucs 14th pick in addition to a 4th rounder.

The 49ers probably realized that the Buccaneers were not going to take the player that they wanted, so there was no harm in taking him a pick later. The player the Niners chose was defensive tackle Javon Kinlaw. Kinlaw was a standout lineman in South Carolina and the Niners look forward to adding him to their already-elite defensive line.

Kinlaw will be flanked by stars like Nick Bosa, Arik Armstead, and Dee Ford, where he can learn from the best. Some might wonder if the Niners made the right move, as they essentially exchanged Deforest Buckner for Javon Kinlaw, however, both are great athletes, and Kinlaw will easily fit his role while playing on a cheaper contract.

In addition to drafting Kinlaw, the 49ers made another trade in the first round. The Niners traded their 31st pick, the 4th round pick that they had received from the Bucs, and a 5th round pick to the Minnesota Vikings in order to acquire the 25th pick of the draft. The Niners made this trade as they assured that they could secure wideout Brandon Aiyuk. Aiyuk is a speedster out of Arizona State that will help compliment the Niners offense and will act as another weapon for head coach Kyle Shanahan to play around with.

Through their trades, the Niners lost a lot of picks in the middle of the draft (they do not have another pick until the late 5th round) but it does not matter. The 49ers are already a top tier team that is close to a championship. With the two first-round picks they got, they are bringing themselves even closer. The Niners are not a rebuilding team that needs players in the 2nd-7th rounds who will produce later, they need good players to supplement their roster now, and that is what they got.

The San Francisco 49ers will look back on the 2020 draft with pride, as will the NFL, who, among a global pandemic, managed to pull off a draft.