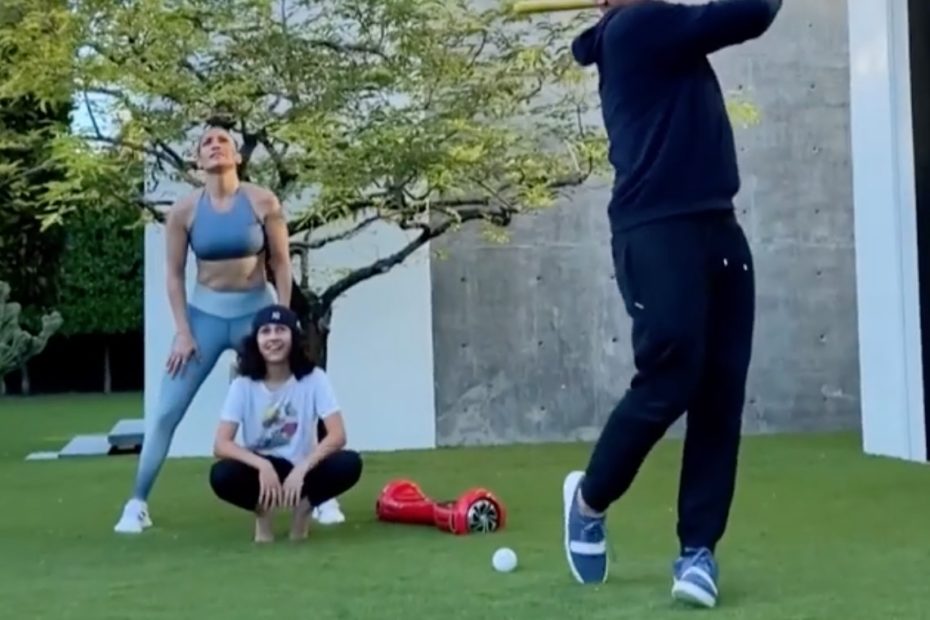 With much of the world staying inside of their homes, people have to get creative with how they spend their downtime and how to stay connected to the world around them. As a result, legendary and retired baseball player Alex Rodriguez decided to put on a virtual baseball clinic in his and Jennifer Lopez‘s backyard.

With the help from one of his daughters Natasha and JLo’s daughter Emmy, A-Rod shared some of the drills he did every day as a kid to go from a good baseball player to a great one. As he mentioned during the Livestream, it was these drills that helped him achieve his goal of getting into the Major Leagues before the age of 20.

When it comes to getting more comfortable with fielding, grab a parent, a sibling or a friend, and have them bounce a baseball off of a wall and field the ball from your knees with your bare hands. He suggests fielding a handful of balls with each hand before doing the same thing with your glove.

As Rodriguez explained in the video, this drill teaches your hands to be soft and helps you track the incoming ball with ease. “Repetition will be your best friend,” the two-time Golden Glove award winner said.

Additionally, A-Rod showed viewers how to best hold a baseball when throwing it. And when gripping a baseball, it is best to throw it at 12 to 6, which looks like this:

This helps with the rotation of the ball. He then instructed players to kneel on the same knee as your throwing arm, put your gloved hand under the opposite elbow and toss the ball back and forth several times. This teaches technique.

Then it’s time to stand up and move further apart. As A-Rod explained, it’s important not to forget about technique when throwing the ball for distance. He instructs athletes to use the opposite shoulder and elbow as a guide to help get your ball to its intended target. “Use the arm,” the father of two said when talking about how often a baseball player should throw for distance. “If you don’t use it, you’ll lose it.”

The MVP then said the last 10 tosses for the day should be at close range for accuracy. “Fundamentals is the fastest way to the major leagues,” A-Rod told his audience. He then added that fundamentals are the tools you need to be great, explaining that “defense, defense, defense” is everything.

A-Rod and Emmy then put on a hitting clinic after he bragged about his fiancé’s daughter, who is playing softball at a very high level.

One of the drills the World Series Champion shared was using a broomstick to hit either almonds or black beans as if they were baseballs. He explained that at the age of 12, he wouldn’t stop swinging the broomstick until he hit at least 100 beans. He admittedly called himself a little bit crazy, but he was determined to make his dream a reality.

After hitting the beans and almonds, he transitions to a Wiffle ball and bat, before going to a regular baseball. A-Rod explained that after hitting 100 black beans, the regulation baseball would look like a softball to him. “What I’m trying to show people is that there are different ways to practice.”

“Being a good hitter is evergreen and will never go out of style. People are crazy about home runs, they’re crazy about swinging and missing,” he said. “What I’m telling all you great youngsters out there is think about being a great hitter. Do not sacrifice contact for power.”

And there you have it, just a few everyday drills that you can do anywhere from A-Rod himself.