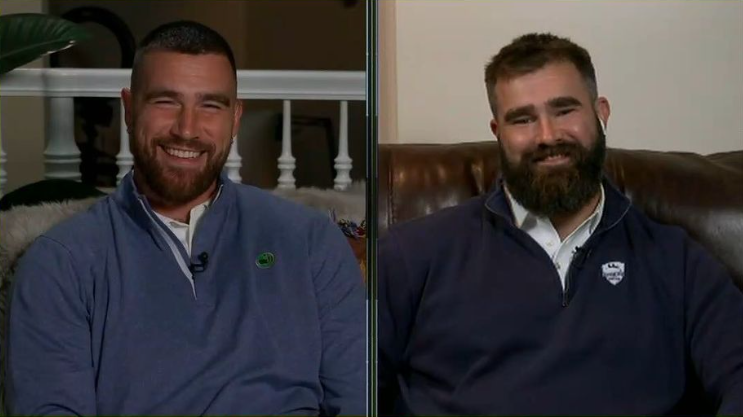 Sports commentators and sports analysts play a vital role in the entertainment that comes with sports today. Whether they’re in the booth, in the studio, or on the sideline, they make the sport more enjoyable for the millions of fans watching from home. They deserve all the credit in the world for what they do.

With that said, we’ve been seeing a major change in the way sports are presented to fans in recent years. One primary example of this is with the rising number of former athletes becoming sports commentators, analysts, reporters, and online personalities – giving fans more valuable insight from personal experience.

By the looks of it, that’s the future of sports media and if you don’t believe me, just look at the contract Tom Brady signed with FOX Sports earlier this year. He hasn’t even retired from football yet, but he has a 10-year, $375 million contract to become the lead NFL analyst at FOX Sports when he decides to retire.

RELATED: Tom Brady Discusses Move to the Booth Once He Retires and 20 Other Athletes Who Became Sports Commentators

When you watch or listen to a sports game today, a majority of the television personalities you’ll see and hear are former athletes. And not just any former athlete, but some of the biggest names we’ve ever seen in the sports world. Tom Brady might be the next, but it’s something we see in all sports every single year.

Just look at Tony Romo, who’s killing it in the booth as a play-by-play announcer. Shaquille O’Neal, Kenny Smith, and Charles Barkley give us the best NBA halftime report. Baseball stars like David Ortiz and Alex Rodriguez are now FOX Sports and ESPN, respectively. Sports media is filled with former superstars.

And things aren’t going to be changing anytime soon, especially when you take a look at some of the unique, bright, and entertaining personalities we have in sports today. That’s why we’re going to break down 15 active athletes we believe would make good sports commentators, analysts, reporters, etc..

Von Miller has always been praised as one of the coolest guys in the NFL. He’s quick to dish words of wisdom when needed, is always making people laugh, but is also one of the most laid back guys in any room he’s in – all of which are personality traits that are on full display on his video podcast titled Voncast.

Miller is currently playing in his 11th season in the NFL and first season with the Buffalo Bills. In 161 career games played, Miller has 561 tackles, 164 tackles for loss, 123.5 sacks, 2 interceptions, 27 forced fumbles, and 2 defensive touchdowns. He’s a future Hall of Famer that still dominates the pass rush.

Kelsey Plum is one of the most entertaining and hilarious personalities in the WNBA right now. She isn’t afraid to speak her mind, is quick with the jokes, and has an infectious smile that lights up a room – unless you get on her bad side. She’s the epitome of what we need more of in sports media today.

Plum just finished her fifth season in the WNBA and fourth season with the Las Vegas Aces. She had a career-year in 2022 with 20.2 points, 2.7 rebounds, 5.1 assists, and 1.0 steals per game en route to winning her first title. Not only that, but she won a gold medal for Team USA at the 2020 Olympics.

Cam Jordan is one of the fiercest NFL players when the ball is snapped, but he’s actually one of the nicest individuals you’ll meet – especially in the NFL. He’s very well-spoken and charismatic, but also brings a lot of knowledge about the game as he boasts a high football IQ. His insight would be A+.

Jordan is currently playing in his 12th season in the NFL – all of which with the New Orleans Saints. In 188 career games played, Jordan has 617 tackles, 216 tackles for loss, 112.5 sacks, 2 interceptions, 14 forced fumbles, and 1 defensive touchdowns. He’s a seven-time Pro Bowler and future Hall of Famer.

Miguel Cabrera has a golden personality, even if he doesn’t show it often – many baseball fans would agree that he’s one of the quietest superstars the MLB has ever seen. His humbleness would work well in the booth or in the studio, especially alongside other analysts, such as David Ortiz and Pedro Martinez.

Chris Paul has always been a consummate professional ever since he entered the NBA in 2005 – which is evidenced by his serving as President of the National Basketball Players’ Association between 2013 and 2021. He has always been a leader in the locker room and is well-respected around the league.

Paul is currently playing in his 18th season in the NBA and third season with the Phoenix Suns. Through 1,167 games, Paul is averaging 18.0 points, 4.5 rebounds, 9.5 assists, and 2.1 steals per game. He’s a 12-time All-Star and future Hall of Famer that led the league in assists five times and steals six times.

George Kittle is known as one of the most entertaining players in the league – not just on the field (when healthy, at least), but in general. He has a lot of passion for the game, which he isn’t afraid to display, and gives off the same vibes Rob Gronkowski gave off when he was in the league – just give him a mic!

Tiger Woods is arguably the greatest golfer to ever play the game and brings with him a world of knowledge and experience within the golf community – who wouldn’t want to hear him talk about golf when he finally decides to stop playing? I think he would add a lot of valuable insight for the fans.

Woods turned professional in 1996 after two years at Stanford University. During his 26-year career, Woods has accumulated 110 professional wins (82 on the PGA Tour) and 15 major championships. He has spent a total of 683 weeks as the No. 1 golfer in the world. He has been an absolute joy to watch.

J.J. Watt is another one of those football players who’s universally regarded as a good overall dude. He never hesitates to help his community, is viewed as a leader in the locker room, and isn’t afraid to share his knowledge of the game with those that are willing to listen. I love how he handles himself off the field.

Watt is playing in his 12th season in the NFL and second with the Arizona Cardinals. In 146 career games played, Watt has 568 tackles, 185 tackles for loss, 108.5 sacks, 2 interceptions, 26 forced fumbles, and 3 defensive touchdowns. He’s a three-time AP Defensive Player of the Year and future Hall of Famer.

Mookie Betts is a superb athlete in many ways, which would make him an entertaining sports analyst because he can comment on a variety of sports – he’s also a talented bowler and basketball player. He has one of the best personalities in all of baseball and is one of the best MLB players at his position.

Sidney Crosby is one of the most iconic and well-known hockey players of his generation. You either love him or hate him, but either way, you respect him because he has earned his status as one of the all-time greats. Not only that, but some would agree that he’s a man of few, carefully-considered words.

Crosby is currently playing in his 18th season in the NHL – all of which with the Pittsburgh Penguins, who drafted him in 2005. In 1,136 career games, he has scored 534 goals and dished 913 assists for 1,447 total points. He’s a three-time Stanley Cup winner, eight-time All-Star, and future first ballot Hall of Famer.

Jason Kelce is one of the most respected offensive lineman in the NFL. He has that blue-collar attitude that many fans around the country can relate to. He already has a podcast – New Heights – with his younger brother, Travis Kelce (who would also make a good commentator). They’re hilarious together.

Kelce has started in all 171 games he has played in since being drafted in the sixth round of the 2011 NFL Draft. He hasn’t missed a game since 2014 and is more reliable than most. As for his brother, Travis is one of the best tight ends ever and continues to break receiving records with Patrick Mahomes.

Speaking of athletes who are well-respected and beloved league-wide, let’s not forget about Freddie Freeman. He might’ve earned some new haters when he left the Atlanta Braves for the Los Angeles Dodgers, but that shouldn’t overshadow that he’s one of the best locker room presences in the MLB.

How can you hate Joe Burrow? He’s one of the most innocent quarterbacks in the league, but also has a swag about him that makes you want to root for him. His interviews are always elite as he finds the perfect balance between being sarcastic and cocky, but serious and calculated – it’s a good combination.

Burrow is currently playing in his third season in the NFL since being drafted by the Cincinnati Bengals with the No. 1 overall pick in 2020. He has already won Comeback Player of the Year after missing most of his rookie season to injury, leading his team to a Super Bowl appearance when he returned last year.

Stephen Curry is one of the best personalities in the NBA. On the court, there’s no mercy – he will make a fool out of you and then rub it in your face how good he is. Off the court, he’s one of the nicest people you’ll ever meet – always taking time to connect with fans and always touting his family over everything.

Mike Trout has been one of the best personalities in the MLB for the past decade. He doesn’t have a large personality, rather choosing to stay out of the spotlight as much as possible. At the same time, the spotlight continues to follow him because he’s one of the greatest baseball players of this generation.

Active Athletes Who Are Already Sports Commentators and/or Analysts

There are several athletes we wanted to include in the list above, but felt it wouldn’t be accurate since they’ve technically already started their sports media careers – despite still being an active athlete. They’re proving that you don’t have to wait until retirement to start thinking about their life after sports.

The NBA has seen a huge push in active athletes becoming sports analysts – names like CJ McCollum, Patrick Beverley, and Draymond Green have already built a name for themselves in the media world. McCollum and Beverley have made appearances on ESPN, while Green has a contract with TNT.

YOU MAY ALSO LIKE: What These 20 Well-Known Athletes Have Done Following Retirement

Chiney Ogwumike and Candace Parker are two other athletes who frequently appear in front of the camera – Parker for TNT and Ogwumike for ESPN. It’s always nice to see athletes give their perspective and opinion on the sport they’ve dedicated their entire lives to – it gives fans a different outlook!