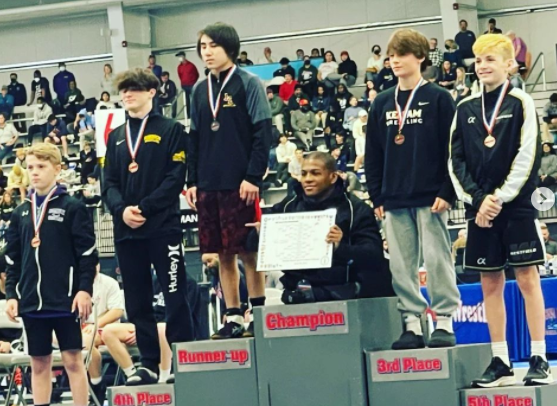 Adonis Lattimore did what many would view as impossible when he won the Virginia High School League Class 6 state wrestling championship. The Landstown (Va.) High School senior wrestler was born without legs and just one finger in one of his hands. Now he’s a champion.

Although it might seem impossible to everyone else, it was always within reach in Lattimore’s eyes. After winning the championship, Lattimore shared some words of encouragement: “Really if you work hard, you can do anything — even win a state championship without legs,” he said.

His coach, James Sanderlin, also weighed in on the performance. “Amazing. He did all the work. I just get to be a part of the journey. It’s an amazing feeling to watch him do it and have the support of the crowd. It was awesome. He’s a hard-working young man. I’m just speechless.”

Sanderlin was seen in a video reacting to the win in real-time as he jumped with joy and excitement. The video not only shows how much it meant to Lattimore but also to those that have been a part of his journey. Lattimore was also seen hugging his father after the incredible victory.

“What we understood is that there is a greater calling on Adonis’ life that’s beyond what we could imagine,” said Adonis’ father, Jerrold Lattimore. “We also knew this wasn’t just our story. But this was our story to share.”

Lattimore had an incredible season that ended with a 32-7 record. It was his first time making it to the state championship – he made regionals as a freshman, missed regionals as a sophomore, and saw the state wrestling tournament canceled last year due to COVID-19.

He began wrestling in the second grade and finally accomplished something he always said he would obtain. “I’ve been dreaming of this since I knew what it was, and to finally have it happen is just – I don’t know how to explain it,” Lattimore continued. What an inspirational story he has.

What’s Next for Adonis Lattimore?

Adonis Lattimore hasn’t had an easy life, but he’s making the most out of it and is an inspiration to many as a result. Not only was he born without a right leg, but his left leg ends at his thigh and he only has one finger on one of his hands. For many, that would be enough to give up on life.

Much like his life in general, Lattimore has had to overcome a lot as a wrestler. “At one point I was on a losing streak for about a year. Sometime in middle school I hit my stride and brought it into high school,” said Lattimore. “My goal is to win a state [championship] this year.”

YOU MAY ALSO LIKE: 20 Girl Soccer Players Your Kids Should Look Up To

And that he did. So, what’s next for the young wrestler? Well, it seems he’s definitely interested in continuing his wrestling career in college next year. We know he’ll have the support of many – including us – as he embarks on this new chapter of his life. For now, take this time to celebrate!