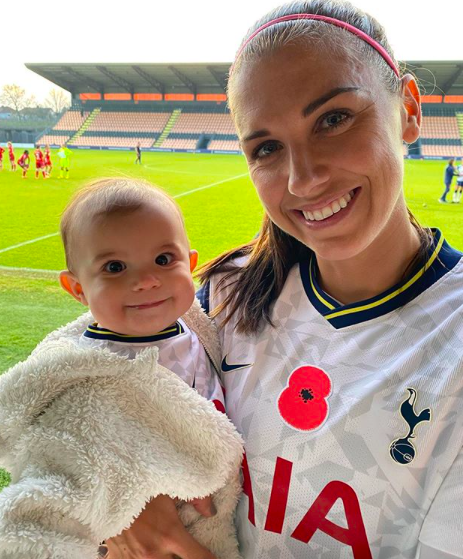 Alex Morgan is back on the pitch with her new team Tottenham Hotspur. And her daughter, Charlie, was there to cheer her mom on across the pond.

“Today was a milestone for me personally…So happy to be back on the field doing what I love,” Morgan said in a post of a picture with her daughter.

“My daughter was here with her Spurs kit and it’s just fun to look up after the match, seeing her there supporting me, yeah it’s pretty fun,” Morgan said per Tottenham Hotspur media after the game.

Tottenham Hotspur released behind the scenes footage of Morgan’s debut match against Reading:

“Yeah, I mean it just feels good to get back on the field for the first time in more than a year, so happy about that,” Morgan said. “Obviously not too happy about the result. But, I just had to start to get some minutes and build from there so pretty happy that this is a good starting point.”

The game resulted in a one-one draw. But Morgan said they look forward to building on this. The team’s next match is against Bristol City on Saturday.