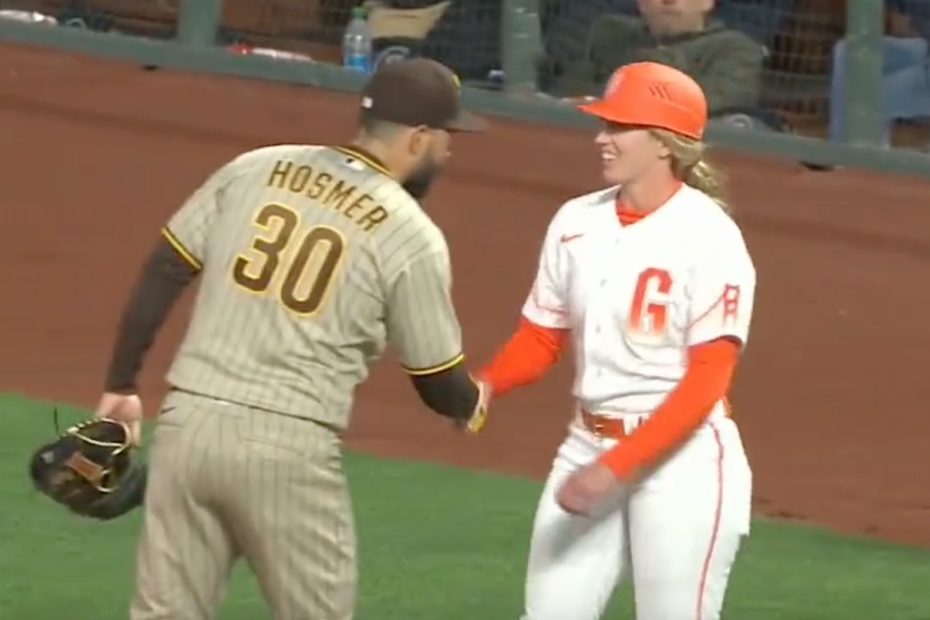 When the San Francisco Giants’ first base coach ​​Antoan Richardson was ejected from the game after the third inning, Alyssa Nakken stepped up to take his place. As she made her way onto the field, many fans were unaware that they were witnessing Major League Baseball history.

Nakken, who was also the first woman to hold down a full-time coaching position with San Francisco, was sent to the infield during San Francisco’s game against the San Diego Padres after Richardson was removed from the game. She quickly replaced her sweatshirt with a No. 92 jersey and an orange batting and made her way to first base, where she made history as the first woman to coach on the field during a regular-season game. Although she recognized the significance of this, she informed reporters that she was simply doing her job.

“I think we’re all inspirations doing everything that we do on a day-to-day basis and I think, yes, this carries a little bit more weight because of the visibility, obviously there’s a historical nature to it,” Nakken said, according to ESPN. “But again, this is my job.”

After Richardson was pulled from the game for allegedly engaging in a verbal disagreement with Padres third-base coach Mike Shildt, Nakken reported that autopilot kicked in and she submerged herself in the game.

“Right now, in this moment as I reflect back, I reflect back to somebody needed to go out, we needed a coach to coach first base, our first-base coach got thrown out,” she recalled. “I’ve been in training as a first-base coach for the last few years and work alongside Antoan, so I stepped into what I’ve been hired to do, is support this staff and this team.”

The 31-year-old coach has made an impact in MLB for multiple reasons, including being the first woman to coach on-field during exhibition play in 2020 when the Giants were playing the Oakland A’s. Her jersey from this game was sent to the Baseball Hall of Fame as she would go on to coach exhibition games. However, with the San Diego Padres game being a regular-season game, she has received a plethora of positive feedback, including her game helmet also being sent to the Baseball Hall of Fame museum.

“I’m really excited that Alyssa got her opportunity to make her major league debut and I’m very proud of her,” Richardson said of Nakken. “I think she did a really wonderful job and we got a win, so that’s the most important thing.”