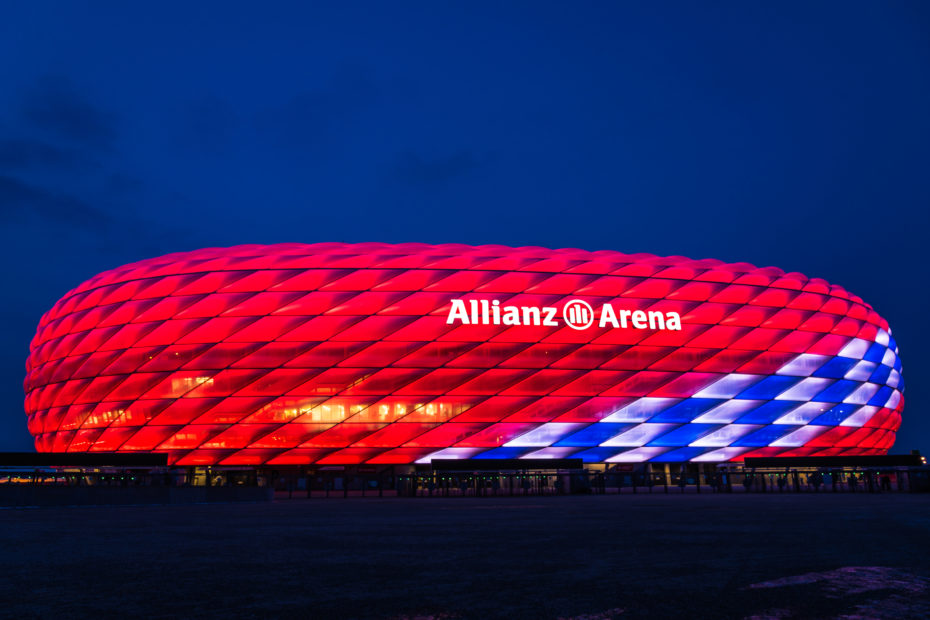 American football in Europe has taken on a new meaning in recent years as the NFL looks to expand its influence in markets around the world. The league originally promoted itself abroad through a series of preseason games played annually overseas between 1986 and 2005.

In October 2007, the Miami Dolphins and New York Giants were featured in the first ever regular season game played in London, which took place in Wembley Stadium. Over the next 10 seasons, the league successfully played 14 more regular season games in London.

The NFL International Series, as it came to be known as, has evolved greatly since 2016. Not only did the NFL London Games extend to Twickenham Stadium and Tottenham Hotspur Stadium, but the NFL played its second regular season game in Mexico City at Estadio Azteca.

RELATED: 20 of the Shortest NFL Players That Proved Height Means Nothing

American Football in Europe Continues in 2022

As of 2022, the NFL has played 33 regular season games internationally since 2007 – 30 of which were in London and three of which in Mexico City. Those numbers will continue to rise as the NFL eyes another turning point in its NFL International Series ahead of the 2022-23 season.

According to a statement by the NFL on February 28, the 2022-23 regular season will not only feature three games in London and one game in Mexico City, but it’ll feature the first ever regular season game in Germany. The game will be played in Allianz Arena in Munich, Germany.

Although dates weren’t announced and the 2022-23 schedule hasn’t been released yet, the NFL did list the five NFL teams that will be considered the home teams– the Green Bay Packers, Jacksonville Jaguars, New Orleans Saints, Arizona Cardinals, and Tampa Bay Buccaneers.

Let’s take a closer look at each team and some of the players these international fans will get to see in-person.

As of the end of last season, the Green Bay Packers were the only NFL team to never appear in an NFL International Series game. With the NFL’s announcement, the Packers will finally get their opportunity abroad in one of the two games being played in Tottenham Hotspur Stadium.

It’s quite a surprise it took this long to get the Packers in London, especially considering how many fans they have abroad. “It’s going to be like a home game. It will be 60% or more Packers fans I would imagine, when it comes to match day,” said one Packers’ fan in Leicester, England.

Although this is the first time the Packers travel to London, fans of American football in Europe can rest assured that they will have an opportunity to witness one of the premier, most historical NFL teams live in their home city. The Packers are 39-10 across the past three seasons.

With three consecutive 13-game seasons under one of the greatest quarterbacks of all-time in Aaron Rodgers, a lot of their success this upcoming season will depend on whether or not he returns to the roster. If not, this team could look a lot different and a lot less competitive.

Rodgers is the reigning back-to-back MVP winner, throwing for 8,414 yards, 85 touchdowns, and just 9 interceptions in those two years. Davante Adams has been his star receiver with 238 catches, 2,927 receiving yards, and 29 receiving touchdowns over the past two seasons.

The team has made it clear that they want Rodgers to return and are committed to winning a Super Bowl with him. If they can bring him back, then London better brace themselves for one of the best arms in all of football. It’s something you won’t want to miss – especially live, in-person.

The Jacksonville Jaguars will be the second of three teams hosting a regular season game in London and the only team to be playing in Wembley Stadium. It has become an annual tradition for the Jaguars, who have played a game in London every year since 2013 – except in 2020.

In fact, the London community has embraced the Jaguars so much that there have been numerous rumors of a potential move by the team to London. Although those rumors have existed for several years, there’s no doubt the Jaguars are the right team to relocate.

This will be the first time the Jaguars have played in Wembley since 2019 when they lost to the Houston Texans 26-3 in what was a lousy performance. Due to the COVID-19 pandemic, the league canceled their NFL International Series for the 2020 season to keep players safe.

The Jaguars entered the league in 1995 and made the playoffs four of their first five seasons, including two trips to the AFC Championship game. Unfortunately, they’ve only had three playoff appearances and have just four winning seasons since 2000 – that’s a 22-year period!

It’s a good thing the London community embraces this team because they might not get a good show out of it – unless they play a good team. Jacksonville is just 4-29 in the past two seasons and while they do have some good pieces to build around, they’re far away from contending.

The New Orleans Saints will be the third and final team hosting a regular season game in London this season. Like the Packers, they’ll be playing in Tottenham Hotspur Stadium, the third largest football stadium in England. It’s their third London appearance, but first in Tottenham.

The Saints’ first appearance came in 2008 at Wembley Stadium and it was just the second installment of the London Games. They defeated the San Diego Chargers 37-32 in a game that featured a lot of offense. Drew Brees went 30/41 for 339 yards and three touchdowns.

Their second London appearance came in 2017 and was one of two games played at Wembley Stadium that season. The Saints defeated the Miami Dolphins 20-0 in what was the 14th shutout in team history and first ever away from their home stadium. It was a dominant performance.

The Saints are going to put their 2-0 record in London on the line this season and they won’t have Drew Brees to lead them to victory – he threw five touchdowns and zero interceptions in those two victories. Not having their longtime head coach Sean Payton will also hurt.

With that said, the New Orleans Saints are ready to turn the chapter – they’ve been ready since Brees retired last season, but even more ready now that Payton has retired. They’ve already found their next head coach in Dennis Allen, but they have yet to find a franchise quarterback.

Either way, the Saints know how to put on a good show in London and they’ll likely do that again this season. While we don’t know who they’ll play or what week they’ll play in London, it’s a game many people are excited for – especially those that follow American football in Europe.

The Arizona Cardinals will be the only team playing a 2022 regular season game in Mexico City. The game will be played in Estadio Azteca, which has hosted three games since 2016. The Cardinals were scheduled to play in Mexico City in 2020, but COVID-19 had other plans.

This won’t be the Cardinals’ first visit to Mexico City. In fact, they made history in 2005 when they played in the first NFL regular season game outside the United States – the game took place in Estadio Azteca, the same stadium they’ll be returning to in 2022. It’ll be exciting.

The Cardinals ended up winning that 2005 game in Mexico City, defeating the San Francisco 49ers 31-14 in dominant fashion. Josh McCown finished 32/46 for 385 yards, two touchdowns, and zero interceptions. He added 32 yards on the ground and the defense played very well.

Mexico City has hosted three games in the past six years. The Raiders defeated the Texans in 2016, the Patriots defeated the Raiders in 2017, and the Chiefs defeated the Chargers in 2019. The city is happy to welcome back the NFL and the NFL is equally as excited to finally return.

In addition to their trip to Mexico City in 2005, the Cardinals have played one game in London in 2017. It wasn’t a good performance as they lost 33-0 to the Los Angeles Rams in Twickenham Stadium. The Cardinals haven’t appeared in an international game since that embarrassment.

The Cardinals have a very talented team to display in Mexico City this season. Kyler Murray is a joy to watch, he has one of the best receiving corps in the league, and they have a defense with some big names. With an entire offseason ahead of us, they’ll only continue to get better.

The Tampa Bay Buccaneers will be making history next season, which might help heal the burn of watching Tom Brady retire a month ago. When they take the field at Allianz Arena in Munich, Germany this season, it’ll mark the first ever NFL regular season game in the country.

The league wants to continue their expansion outward and playing a game in Germany was the next step. The Buccaneers were the logical option, as they already have a very strong fanbase in the Germany community and became the team’s official international home market in 2021.

The Kansas City Chiefs, Carolina Panthers, and New England Patriots were also granted an International Home Marketing Area (IHMA) in Germany last year. Each of those teams are scheduled to make appearances in Germany over the next few years, which is exciting.

The Bucs are hoping for much better luck as they prepare for their visit to Germany. They have a lot of fans that they’ll want to play well for, but they’ll have to find a quarterback that can handle this talented offense. The Bucs have one of the best rosters, but Brady retiring left a glaring hole.

With that said, they have plenty of options and shouldn’t have too much of a problem returning to form in 2022. You can’t replace Tom Brady, but there are plenty of players that can help Bruce Arians get the most out of this offense. As for their defense, they’ll be just as strong as ever.

What’s Next for American Football in Europe?

There’s a lot of future for American football in Europe and the NFL is only just getting started with their international plans. They’ve already played regular season games in two countries (three cities) and will be welcoming its third country when Munich, Germany joins in on the fun.

With that said, what’s next for the NFL? Well, they have several locations they’re targeting as potential future markets – including Wales, Scotland, Dublin, Rio de Janeiro, China, Australia, and Canada. There’s certainly a lot to look forward to with the annual NFL International Series.

And that’s not all of it. There are even talks of one day expanding the league to an international city. That means we could see an NFL team based overseas and the current favorite to be awarded a team is London. That would be something, but don’t expect it to happen soon.