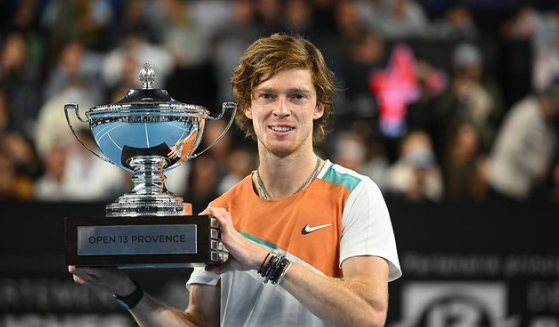 Just moments after advancing to the Dubai Championships final on Friday, Russian tennis star Andrey Rublev wrote ‘No War Please’ on a TV camera lens. It’s a tradition for winners to write a message on the lens after the game, which Rublev saw as an opportunity to promote peace.

Rublev defeated Daniel Evans in the Round of 32, Soonwoo Kwon in the Round of 16, Mackenzie McDonald in the Quarterfinals, and then Hubert Hurkacz in the Semifinals. He advances to the Dubai Championships final against Jiří Veselý of the Czech Republic.

The message comes amid Russia’s invasion of Ukraine. As of Friday afternoon, Russia was advancing towards Ukraine’s capital of Kyiv with plans of taking down the current Ukrainian government. It’s a tragic war that unfortunately doesn’t have much to do with Ukraine at all.

On Thursday, Rublev talked about the invasion. “In these moments, you realize that my match is not important. It’s not about my match, how it affects me,” he said. “You realize how important (it) is to have peace in the world and to respect each other no matter what, to be united.”

“We should take care of our earth and of each other. This is the most important thing,” Rublev added. It’s probably not easy for Rublev, a Russian athlete, to speak out against his home country – especially considering he’s just 24 years old. Still, it’s what needed to be said.

It’s also worth noting that Rublev teamed up with a Ukrainian tennis player, Denys Molchanov, in a doubles match in Marseille just one week ago. The two won the doubles title together.

Rublev has a 198-114 career record as a pro and has won nine career singles titles. He’s currently ranked No. 7 in the world, but his highest ranking ever was at No. 5 in September 2021. He’s currently 9-2 with one singles title during the 2022 season, which is impressive.

Andrey Rublev Not the Only Athlete Speaking Out Against Russia

Over the past couple of days, Russia’s invasion of Ukraine has escalated and millions of people around the world are calling for peace. And while Andrey Rublev is the latest athlete to speak out, he’s not the only athlete. In fact, athletes from both countries have spoken out recently.

Fellow Russian tennis player Daniil Medvedev noted that he was ‘all for peace’ after his win in the Mexican Open quarterfinals. He also approved of Rublev’s doubles title with Molchanov. “In this moment, you understand that tennis sometimes is not that important,” said Medvedev.

Russian NHL player, Alex Ovechkin, has also spoken out against the war. “Please, no more war. It doesn’t matter who is in the war — Russia, Ukraine, different countries — I think we live in a world, like, we have to live in peace and a great world,” said the Washington Capitals’ captain.

On the Ukrainian side, several famous boxers have made headlines for their reactions to the war. Hall of Fame boxers and brothers Vitali and Wladimir Klitschko have taken up arms to defend their country. Vitali Klitschko is the current mayor of Ukrainian’s capital, Kyiv.

Oleskandr Usyk, another Ukrainian boxer, announced that he’s in his home country and ready to defend it. “Friends, we have to unite because it’s a hard time right now and I’m really emotional and worry about my country, and our people,” said Usyk in a social media post.

YOU MAY ALSO LIKE: Adonis Lattimore Wins State Wrestling Championship Without Legs

It’s a tragedy what’s going on with Ukraine today and we sincerely wish for the well-beng of the citizens of the country. We’re inspired and motivated by the selflessness and courage being displayed by some of Ukraine’s top athletes, but also by some famous Russian athletes.