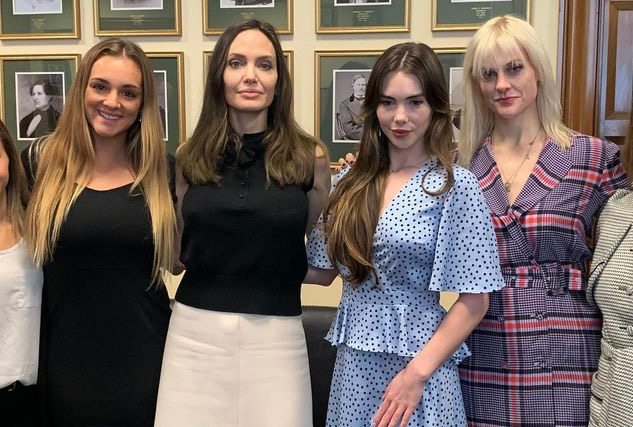 Among these athletes are Simone Biles, McKayla Maroney, Aly Raisman, and Maggie Nichols, all of whom spoke out in front of the Senate Judiciary Committee against the FBI’s lack of action.

“I was honored to meet with some of the brave US gymnasts who appeared before the Senate Judiciary Committee yesterday,” the actress wrote in an Instagram post that paid tribute to the gymnasts. “I’m in awe of their courage and commitment to preventing future failures to investigate abuse. As Aly Raisman said in her testimony, ‘Over 100 victims could have been spared the abuse. All we needed was one adult to do the right thing.'”

“Sending support and respect to them, and to all who are reliving this trauma so that system reforms can occur,” Jolie continued. The actress referenced system reform as an essential need that would help eliminate sexual abuse, which likely was a comment that was sparked by Simone Biles during her testimony.

The 24-year-old gymnast explained that despite the FBI and other institutions being aware of the abuse Nassar was putting dozens of young women through, they did nothing to help these girls.

“We suffered and continue to suffer because no one at FBI, USAG, or the USOPC did what was necessary to protect us. We have been failed, and we deserve answers. Nassar is where he belongs, but those who enabled him deserve to be held accountable. If they are not, I am convinced that this will continue to happen to others across Olympic sports,” she stated courageously.

Similar to Biles, McKayla Maroney recalled in extreme detail testifying to the FBI during the time of the abuse, just for them to brush off her claims. “After telling my entire story of abuse to the FBI in the summer of 2015, not only did the FBI not report my abuse, but when they eventually documented the report 17 months later, they made entirely false claims about what I said,” the retired gymnast shared, according to CNN.

Angelina Jolie is currently working on programs that seek to eliminate this abuse so that no other woman has to suffer.

“I was on Capitol Hill this week, engaging with Senators on the Violence Against Women Act reauthorization and FBI reforms, including better protections for abused children, non-biased forensic evidence collection, trauma care, and judicial training,” Jolie explained at the end of her statement that detailed her opportunity to meet the brave young women that testified against their abuser.