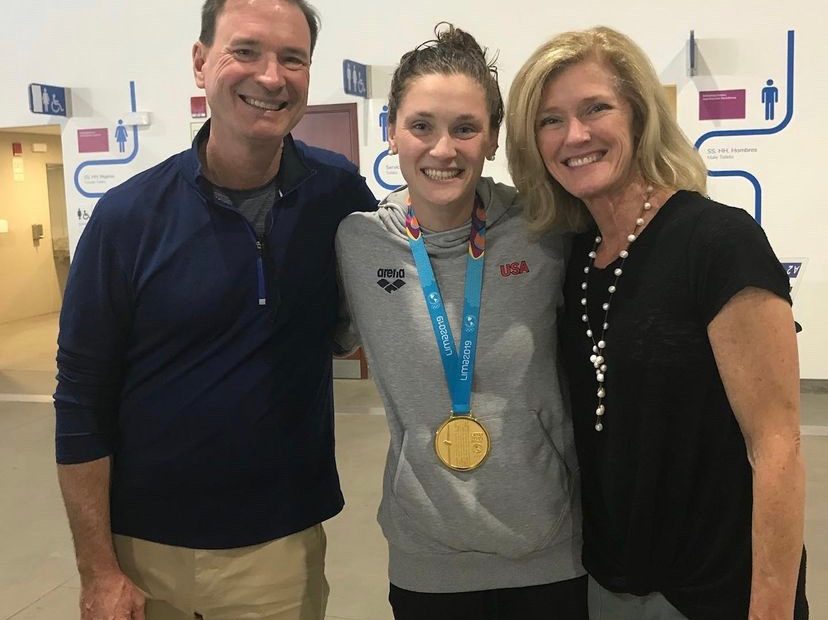 Twenty-six-year-old American swimmer, Annie Lazor, has just won a bronze medal at the 2020 Olympics for the women’s 200m breaststroke. Surely, her late father would be proud. Lazor fell 1.89 seconds behind the gold medalist, Tatjana Schoenmaker, who is from South Africa.

The Michigan native’s placement is all the more impressive when contextualized by the fact that her father passed away in April. Since then, she has been grieving his loss.

The swimmer spoke with reporters after her Friday race and explained that she has been having a complicated relationship with the grieving process because, “obviously you’re trying to still grieve the worst thing that’s ever happened to you while you’re going through the best part of [your] life so far, which is the Olympic process and making the team and everything.”

She also explained that has been difficult preparing for the Olympics when she had nearly no preparation for the loss of a loved one. ESPN reported that her father’s cause of death was COVID-19 related.

Annie Lazor says her team’s support has impacted her significantly

Although it is incredibly sad to experience the loss of one of your biggest supports, Lazor has stated that she doesn’t know where she’d be without the help of her team. “I’m just lucky to have so many of my teammates on the Olympic team with me,” she said, according to People. “My coach, Ray, who’s just been my person I’ve been able to go to.”

In an interview with Today, the 26-year-old also gave her thanks to fellow Team USA women’s swimmer, Lilly King. King ended up earning a silver medal in the 200m breaststroke. Lazer commented, “[King] was talking to my mom and she promised my mom that she was going to do everything it took to put me on the team and she was going to put me through practice every day. That meant the absolute world to me and to my mom.”

RELATED: Caeleb Dressel, 24, Had an Amazing Race and Won Gold – His Wife Cried Tears of Joy!

Despite the unwavering grief, Lazor is happy to have the right people supporting her. “It’s still something I’m obviously working through, but again just having that sense of comfortability with people on the team since then and the people who have seen me pretty much every day since that’s happened — that’s just been something that not a lot of people have the privilege to have during this experience,” the Olympian explained.

She also went on to share a heartwarming tribute to her father, crediting him for teaching her that there is more to life than winning. “My dad was the first one to always tell me that I’m so much more than my swimming successes. It’s not because he didn’t care about my swimming; it’s just that was such a minuscule part of who I was to him,” said Lazor.

The athlete additionally included the sentiments, “When the stress and the anxiety becomes too much with this meet, it really just makes me think about what he thinks of me. That obviously he wants to see me accomplish my life dream and my goals, but at the end of the day, that’s such a small part of who I am.”