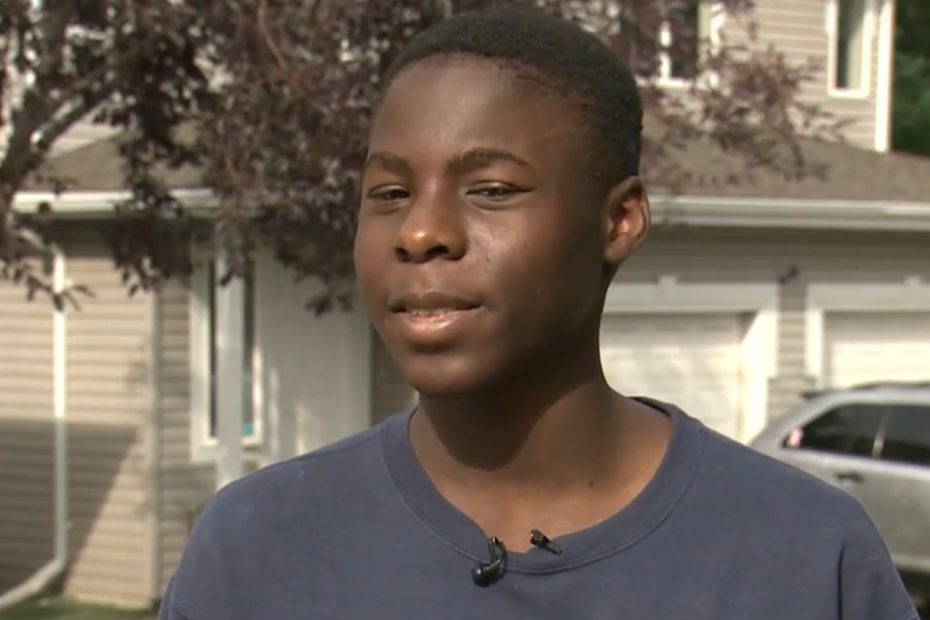 Canadian native, Anthony Moubike, has big dreams of becoming a professional basketball player one day. Amazingly, if those dreams ever become reality, his Alberta-based neighbors can say they were supporting him from day one.

The teen spends most of his free time dribbling away and focusing hard on bettering his basketball skills, which caught the attention of his neighbor, Ian Ray. According to Moubike, he thought that maybe his neighbors were annoyed that he was making noise. As it turns out, it was quite the opposite.

“I thought that whenever I dribble it made a racket and people want to sleep or something like that,” the Canadian child explained from the outside of his suburban home. “I did not know that dribbling that ball, practicing at least maybe two or four hours a day, would actually have an influence.”

However, the actions of this 14-year-old showcased something more profound than influence. Anthony Moubike truly brought an entire community together in order to do a good deed.

Ian Ray, a neighbor of the teen for over 13 years, was impressed with Anthony’s dribbling skills. Yet, he noticed there was one vital thing missing from his practice setup: a basketball net. “He was just a kid who dribbled a basketball — all day, all night. I kind of figured it would be cool if he had a net,” Ray offered.

So, Ray took to Facebook to assemble a crowdfund for young Moubike. Many community members loved the story of the teen and were quick to open their wallets. After raising $750, a gift card to Sport Check was granted to the teen. Apparently, Ray had no idea the story would blow up, but he was glad to see it did. He stated, “I didn’t expect it to blow up like it did but the north side is a pretty strong community and everyone is willing to chip in when they have to. It was really nice.”

Even more impressive, Moubike had absolutely no idea this ordeal was going down until Ray showed up at his doorstep. The 14-year-old shared to reporters, “I come outside and I see a man I barely ever see,” before admitting that he was in shock. Ray was patiently waiting with a brand new net, custom basketball, and gift card.

“Holy moly. I just see the net and it didn’t even matter that it wasn’t built yet, it was just in the box. I was like holy moly, that’s crazy,” Moubike recalled the event. “I was like, ‘Why are you doing this?’ I was so confused. I didn’t say it to him specifically, but it was in my head. Why me? … I didn’t know people were watching me do this.”

Absolutely blown away by the surprise, the entire Moubike family was incredibly grateful for their neighbor’s grand gesture. The teen’s mother even commented, “Wow. This is huge. I didn’t see it coming. I didn’t know I had such a great community that looks out for one another. I keep telling him, I’m going to get it next week, next month. This is really huge for me and my family. I’m overwhelmed by the love.”

The neighbor, Ray, said that he was just happy to be a part of the group effort to make a kid’s dream come true. With kids of his own, he knows the importance of practicing and needing proper equipment. He said in reference to Moubike, “He’s never causing any trouble or anything so it’s nice to get him something like that. … It’s pretty cool how determined he is.”