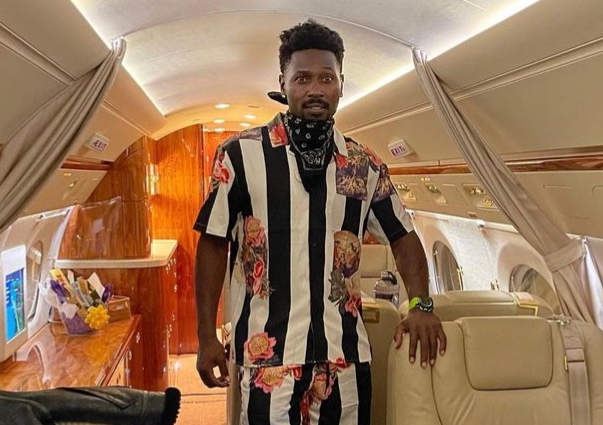 The Tampa Bay Times reported on the story and detailed the accusation of Steven Ruiz, a former personal chef for the NFL star. Ruiz claimed that Brown’s girlfriend,  Cydney Moreau, had reached out to acquire a fake vaccination card that said Brown had received a Johnson & Johnson vaccination.

Providing text messages of the encounter, Ruiz shared that he was offered upwards of $500 to obtain the false vaccination status for his client.

Although Ruiz himself could not offer him a fake vaccination card, he claimed that a few weeks later the wide receiver showed him ones that he had purchased from a different source. Ruiz reportedly came forward to make this information public because Brown also apparently owed him $10,000.

Yet, Sean Burstyn, a legal representative for the athlete, has disputed any claims that Brown is not vaccinated. “Antonio Brown appreciates the severity of the pandemic, which is why he got the vaccine and supports everyone for whom it is advisable to get the vaccine,” Burstyn stated.

He included, “Coronavirus has hit close to home as it took him out of a game. He is healthy, vaccinated, and ready to win another Super Bowl.”

The lawyer also mentioned that gossipping is contributing to the widespread increase of misinformation, and therefore shouldn’t be trusted. “One of the worst parts of the pandemic has been a movement to cast doubt on our country’s vaccination programs with baseless, vindictive tabloid gossip,” he said.

Burstyn also insisted, “If Antonio’s doctors and the guidelines require a booster shot, then at that time, he’ll be happy to do it live on TV and everyone can come watch.”

In addition, the Tampa Bay Buccaneers have responded to these claims of submitting false vaccination cards. “After an extensive educational process conducted throughout our organization this past offseason highlighting the benefits of the COVID-19 vaccines, we received completed vaccination cards from all Tampa Bay Buccaneers players and submitted the required information to the NFL through the established process in accordance with league policy,” they wrote.

Then, the team concluded, “All vaccination cards were reviewed by Buccaneers personnel and no irregularities were observed.”