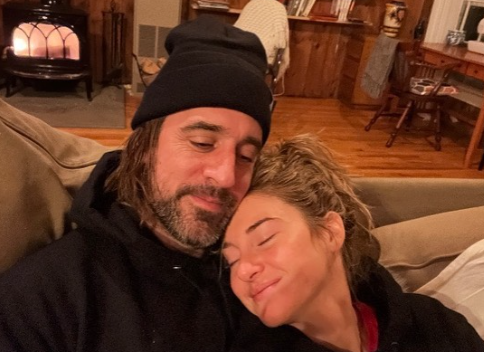 Are Aaron Rodgers and Shailene Woodley Still Together?

Not even a week ago, Aaron Rodgers and Shailene Woodley broke the internet when they called off their engagement. That led many to believe that the two had split and were no longer together, but that might not be the case after Rodgers’ comments in a Tuesday interview.

The 38-year-old quarterback appeared on The Pat McAfee Show on Tuesday following a 12-day cleanse that helped him get his mind, body, and soul on the same page. During the interview, Rodgers talked about a lot – including his relationship with actress Shailene Woodley.

Not only did he call her his ‘partner,’ but Rodgers added, “She’s just an incredible woman, talented, smart kind. I said last night, she taught me what unconditional love looks like and that’s a great gift. When you have a partner like that it just makes life so much more enjoyable.”

RELATED: Aaron Rodgers and Shailene Woodley Call Off Their Engagement

It sounds a lot like they might still be together and if not, then they’re at least staying close amid the news of their engagement being called off. Either way, Rodgers said he left the 12-day Panchakarma feeling an overwhelming sense of gratitude and joy towards life in general.

The interview comes just 12 hours after Rodgers posted a ‘cryptic’ message on Instagram. He shared a quote that read, “Gratitude is the wine for the soul. Go on. Get drunk,” and then added a bunch of photos of himself with friends – including one of him cuddling up next to Woodley.

In the caption, he sent his deepest thanks to a number of people that made the last year for him so special. The QB room, Shailene, the ‘Friday Crew,’ teammates, he was thanking everyone and it almost seemed like a goodbye post or retirement post – don’t worry, it wasn’t.

What Else Did Aaron Rodgers Talk About on Tuesday?

When most people heard that Rodgers was joining Pat McAfee on his show, they immediately thought Rodgers was going to drop some bombshell of an announcement. With his status in Green Bay and overall future in the NFL in question, there was certainly a lot to announce.

Unfortunately, Rodgers opened up the show by saying, “Let me just put this disclaimer out there right away for the few people watching that are tuning in just for a specific, maybe news, and decision. There will be no news today, no decision on my future.” Close, but no cigar.

Outside of talking about Shailene Woodley and his 12-day Panchakarma, he did mention that he doesn’t plan to drag out his decision – despite there being a lot of factors to consider. He also said his exit meetings with coaches and the front office went well, compared to years past.

“I would say the meetings were much different than they’ve been in the past in a positive way and that there were some real honest conversations that I appreciated,” said Rodgers. “What a year, right? I hope things get a little quiet. Make this decision and let me just enjoy myself.”

YOU MAY ALSO LIKE: Athletes With More Than 5 Kids

Although Rodgers hasn’t made a decision on his future, it’s clear that it’s on his mind and he’s working through the process. No matter what decision he makes, there are several teams that will likely have to change their offseason plans to work around the domino effect that ensues.