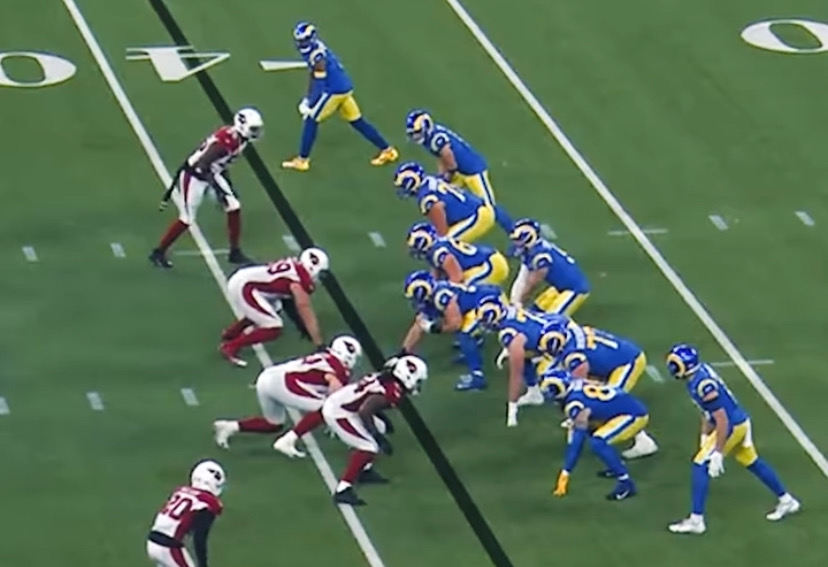 The Arizona Cardinals faced the Los Angeles Rams during Monday night’s wild-card playoff game. With an ultimate score of 34-11 in favor of the Rams, the night was certainly one to remember.

The playoff game had many factors that contributed to a memorable night, but the ones that are worth mentioning are as follows: Arizona Cardinals safety Budda Baker leaving the field on a stretcher, Matthew Stafford earning his first playoff win, and the two teams working together to play a game of hot potato.

Now, they didn’t literally play hot potato in the middle of the field, but that’s the closest description that matches. When Arizona Cardinals rookie wide receiver Rondale Moore was preparing for a catch, the football slipped from his grasp and bounced off the chest of a Los Angeles Rams defender.

However, as the ball hit the Rams player, Moore was able to maneuver himself to grab the ball again. It felt like an authentic game of hot potato between two professional football players.

Although this move was impressive, it wasn’t impressive enough for the Cardinals to bring home a playoff win. In fact, the Cardinals had a relatively rough night, considering their safety player was ushered off the field after a violent collision with Rams running back, Cam Akers.

Budda Baker was brought to a nearby hospital and underwent treatment before being sent back to Arizona. As of today, he is expected to make a full recovery.

“I just want to say thank you for all the well wishes and the prayers from everyone and I appreciate you guys. Everything came out clean and I’m going to make a full recovery. So, definitely blessed,” Baker stated on an Instagram story.

Monday night went smoother for the Los Angeles Rams, and more specifically, their quarterback Matthew Stafford. As of last night, Stafford earned his first-ever playoff game win and he couldn’t be more excited. In the 12 seasons he spent with the Detroit Lions, he never got past game 1 in the playoffs.

“I’m just excited for our team to get the win,” the quarterback said after the game, according to ESPN. He went on to give gratitude to the rest of his team, sharing the sentiments, “What a team effort. Our defense played outstanding tonight…we were good enough on offense to score some points and come away with the win. Just happy to be moving on.”