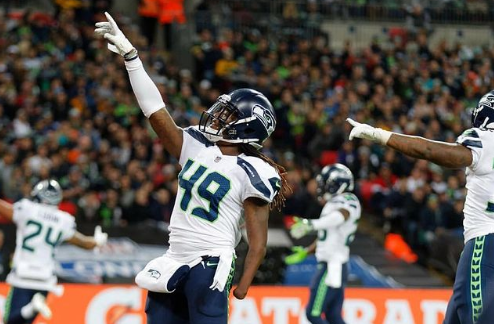 Former Seattle Seahawks’ linebacker Shaquem Griffin announced his retirement from football last week in a letter published by The Players’ Tribune – becoming one of the latest athletes that retired before turning 30. The 27-year-old was drafted by the team in the fifth round in 2018.

That moment in 2018 was special, with Griffin becoming the first player with one hand to be drafted in the NFL – he had his left hand amputated at the age of four due to amniotic band syndrome. It also reunited him with his twin brother, who was a CB for Seattle at the time.

He described his decision in detail, noting that football was always Plan B – “”Plan A was to go to college, get an education and do something that would make a positive impact in the world.” Griffin will now continue to make a difference as a member of the NFL Legends Community.

RELATED: 25 Athletes Who Retired at an Early Age

Other Athletes That Retired Before Turning 30

Shaquem Griffin isn’t the only athlete that retired before turning 30 – which is when a lot of athletes are either just starting their prime or in the midst of their prime. In fact, it’s a decision that many of the greatest athletes of all-time have made, much at the surprise of others.

For example, Rob Gronkowski and Michael Jordan are athletes that retired before turning 30 – though they both came out of retirement. There are also athletes like Doug Baldwin, Patrick Willis, Yao Ming, Calvin Johnson, and Sandy Koufax – all of whom retired at the age of 30.

We can’t forget about Bobby Orr, Ken Dryden, Barry Sanders, and Earl Campbell, who each retired at the age of 31. Of course, none of those people truly retired before the age of 30 – so let’s take a look at some of the most surprising athletes that retired before turning 30.

Eric Cantona is a former French footballer (soccer) who enjoyed a legendary career with Manchester United between 1992 and 1997. He also played on the French national team, as well as Leeds United, Nimes, Montpellier, Bordeaux, Marseille, Martigues, and Auxerre.

Cantona retired from football in 1997, with his final competitive game coming on May 11, 1997 – just 13 days before his 30th birthday. In five years with Manchester United, he scored an impressive 82 goals and added another 20 goals in 45 matches with the French national team.

Casey Stoner is a former Australian pro motorcycle racer who competed in the MotoGP World Championship between 2006 and 2012. During that time, he won two titles – one with Honda and one with Ducatti. Stoner also raced in both the 250cc and 125cc World Championships.

Nico Rosberg is a former Finnish-German racing driver who competed in Formula 1 between 2006 and 2016. He began his career with Williams, but made the move to Mercedes in 2010. Between 2013 and 2016, Rosberg was a teammate of Lewis Hamilton, one of the best ever.

Rosberg retired from racing less than a week after winning his first championship in 2016 – he was at the pinnacle of his career. In 206 starts, he earned 23 wins, 57 podiums, 1,594.5 career points, 30 pole positions, and 20 fastest laps. He has since taken on several other hobbies.

Norman Whiteside is a former Northern Irish footballer (soccer) who excelled at the striker and midfielder positions. A majority of his success occurred between 1982 and 1989, which is when he played for both Manchester United in the Premier League and Northern Irish national team.

Throughout his career, Whiteside played in 274 games across all competitions for Man U – scoring 67 goals before turning 25. He spent the last few years of his career with Everton, but injuries to his knee forced the 26-year-old to announce his retirement in June of 1991.

Yana Kudryavtseva is a retired individual rhythmic gymnast who competed on Russia’s national team between 2007 and 2017. During that time, she won 36 gold, nine silver, and one bronze medal – including 13 golds and three silvers at the World Championships in 2013-2015.

One of the highlights of her career occurred in 2016, when she represented Russia at the Summer Olympic Games in Rio de Janeiro. She earned a silver medal in the all-around event. Unfortunately, a leg injury caused her to retire in January of 2017 – she was just 19 years old.

Ian Thorpe is a former Australian professional swimmer who became the country’s youngest male to ever compete on the national team. He largely specialized in the freestyle event, but also found success in the backstroke and individual medley disciplines. He was dominant.

Sabatini won two Grand Slams in her career – she won the US Open in 1990 (singles) and Wimbledon in 1988 (doubles). She even won a silver medal at the 1988 Olympic Games in Seoul. Unfortunately, an injury forced her to retire in 1996 – she was just 26 years old.

Chris Borland played five years of college football at the University of Wisconsin between 2009 and 2013. During that time, he recorded 420 tackles, 50.0 tackles for a loss, 17.0 sacks, and three interceptions. He was a third-round draft pick by the San Francisco 49ers in 2014.

He started 14 games for the 49ers his rookie season, finishing the year with 108 tackles, 12 tackles for a loss, 1.0 sack, one fumble recovery, and two interceptions. He decided to retire after his rookie season, citing it wasn’t worth the injury risk. Borland was just 24 years old.

Bo Jackson is one of the most recognizable names in sports. He was a three-sport athlete at Auburn University, playing baseball, track and field, and football – where he won the Heisman Trophy in 1985. Despite being drafted No. 1 overall in the NFL Draft, he chose to play baseball.

Andrew Luck played three years of college football at Stanford University between 2009 and 2011, throwing for 9,430 yards and 82 touchdowns for the school. He was later drafted by the Indianapolis Colts with the No. 1 overall pick in 2012 – replacing the legend, Peyton Manning.

Luke Kuechly played three years of college football at Boston College, where he recorded 532 tackles, 35.5 tackles for loss, 2.5 sacks, seven interceptions, and two defensive touchdowns. That led to him being drafted by the Carolina Panthers with the No. 9 overall pick in 2012.

Not only did Kuechly win Defensive Rookie of the Year in 2012, but he won Defensive Player of the Year in 2013 and was named to seven-straight Pro Bowls. Despite being at the top of his game, Kuechly announced his retirement after the 2019 season – he was just 28 years old.

Shannon Miller is a former American artistic gymnast who represented the United States at the 1992 and 1996 Olympics – where she won two gold, two silver, and three bronze medals. Her and Simone Biles are the most decorated American female gymnasts in Olympics history.

In addition to her Olympic success, Miller won five gold, three silver, and one bronze medal at the World Championships between 1991 and 1995. She decided to retire on August 20, 2000 at the age of 23 years old. She has since received her B.B.A. in marketing and entrepreneurship.

Justine Henin is a former Belgian tennis player who was inducted into the International Tennis Hall of Fame in 2016. She turned professional back in 1999 and had an impressive 525-115 singles record over the next 12 years – winning seven Grand Slam tournaments in the process.

Brandon Roy played four years of college basketball at the University of Washington, where he averaged 14.3 points, 5.0 rebounds, 3.0 assists, 1.0 steals, and 0.5 blocks per game (103 games). In the 2006 draft, the Portland Trail Blazers selected Roy with the sixth overall pick.

Jim Brown played three years of college football at Syracuse University between 1954 and 1956, where he had 2,091 rushing yards, 120 receiving yards, and 21 total touchdowns. He was later drafted by the Cleveland Browns with the sixth overall pick of the 1957 NFL Draft.

Over the next nine seasons, Brown accumulated 14,811 yards from scrimmage and 126 total touchdowns. He was a three-time MVP, nine-time Pro Bowler, Rookie of the Year, and one-time champion. Still in his prime, Brown retired in July 1966 to further pursue his career in acting.

Not only that, but Jones won the U.S. Amateur Open five times and the British Amateur once between 1924 and 1930. He decided to retire from golf in 1930 – he was just 28 years old. He later founded the Augusta National Golf Club and co-founded the Masters Tournament.

Gale Sayers played three years of college football at the University of Kansas between 1962 and 1964, where he recorded 2,675 rushing yards, 398 receiving yards, and 19 touchdowns. He was later drafted by the Chicago Bears with the fourth overall pick of the 1965 NFL Draft.

Sayers spent just seven seasons in the NFL, accumulating 4,956 rushing yards, 1,307 receiving yards, and 48 total touchdowns – 20 of which came as a rookie in 1965. Unfortunately, an injury forced him to retire ahead of the 1972 season at just 29 years old. He’s now in the Hall of Fame.

Lorena Ochoa is a former Mexican golfer who played two years of college golf at the University of Arizona. She turned professional in 2002 and joined the LPGA Tour in 2003 – where she remained until 2010. During that time, she had 27 LPGA wins and two major championships.

After winning the Women’s British Open in 2007, she won the Chevron Championship in 2008. With 30 professional wins to her name, she shockingly decided to retire after the 2010 Tres Marias Championship – she was just 29 years old. She made a brief comeback in 2012.

Ashleigh Barty is a retired Australian tennis player who turned professional in April 2010 at just 14 years old. Over the next 12 years, she compiled a 305-102 singles record and 15 career titles – including wins at the 2022 Australian Open, 2019 French Open, and 2021 Wimbledon.

Barty also had a 200-64 record in doubles and won the US Open doubles title in 2018. At the top of her game and on an impressive run over the previous three years, Barty shocked the world when she announced her retirement on march 23, 2022 – she was just 26 years old.

Björn Borg is a former Swedish tennis player who turned professional in 1973 at the age of 17. Over the next decade, he dominated with a 654-140 singles record and 66 titles – including six French Open wins and five wins at Wimbledon. He was also a four-time US Open finalist.

In January 1983, Borg shocked the world when he announced his retirement from tennis – he was just 26 years old. He would attempt a comeback in 1991, but it wouldn’t last long and he clearly wasn’t the same. Who knows what his career could’ve been if he stayed dedicated.

What’s Next for Athletes That Retired Before Turning 30?

Deciding to retire before you turn 30 isn’t an easy decision for any athlete – whether they’re at the top of their game like Bjorn Borg or struggling to land on a team like Shaquem Griffin. These players were born to compete and have dedicated their entire life to the sport they’ve perfected.

And while everyone must retire at some point in their lifetime, that doesn’t mean it’s the end for them – in fact, it’s often just the beginning. They still have the ability to make a difference in other ways, whether they start a new career, invest their money, or give back to the community.

YOU MAY ALSO LIKE: What These 20 Well-Known Athletes Have Done Since Retirement

You also can’t forget that a lot of these athletes have families that they’d love to spend more time with – it’s something that almost sent Tom Brady into retirement this past offseason. No matter what they do with their time, the only thing we can hope for is that they’re happy!