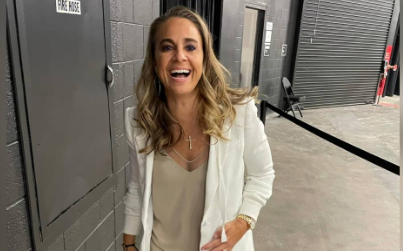 Becky Hammon Wins WNBA Coach of the Year; Here’s a Look at the 16 Other Coaches to Win the Award

In just her first year as head coach of the Las Vegas Aces, Becky Hammon was named the 2022 WNBA Coach of the Year. She earned 27 votes (out of 56), with Tanisha Wright (Atlanta Dream) coming in second with 18 votes and James Wade (Chicago Sky) earning eight votes.

In doing so, Hammon becomes the third former player to win WNBA Coach of the Year – though she’s the first to do it in her first year and the first to do it with her former team. She spent eight years with the San Antonio Silver Stars before the team moved to Las Vegas a few years ago.

After retiring from the WNBA in 2014, Hammon joined the San Antonio Spurs as an assistant coach – the second female to do so in NBA history. She also became the first female acting head coach in NBA history in 2020 before being hired by the Las Vegas Aces last offseason.

RELATED: Rhyne Howard Becomes 25th Player to Win WNBA Rookie of the Year; Who Are the Others?

Past Winners of the WNBA Coach of the Year Award

The WNBA Coach of the Year award has been handed out to the league’s top coach since the inaugural season in 1997. A panel of writers cast their votes, with coaches receiving five points for a first place vote, three points for a second place vote, and one point for a third place vote.

Since 1997, the WNBA Coach of the Year award has been handed out 26 times – six coaches have won the award multiple times. Not only that, but six of the coaches have gone on to win the WNBA Finals – something Becky Hammon has a chance to do with the Aces this season.

After leading her team to a 26-10 record this regular season, Hammon has the Aces just one win away from a Finals berth – they’re so close, but she has to keep them focused. In the meantime, let’s take a look at some of the other coaches to win WNBA Coach of the Year.

It was an extremely impressive four-year run for the head coach. He went on to coach the team until 2006, winning 18+ games in five of the next six seasons. He also coached the women’s national team to two gold medals – 2002 FIBA World Championships and 2004 Olympics.

Michael Cooper won the WNBA Coach of the Year award in 2000 – the first coach not named Chancellor to win the award. He led the Los Angeles Sparks to a 28-4 record in his first year as head coach. Despite an impressive season, the Sparks lost in the 2000 Conference Finals.

Don’t worry, they fought back and finished 28-4 in 2001 and 25-7 in 2002 – winning the title both years. They made it to the WNBA Finals a third consecutive time in 2003, but lost to the Detroit Shock. After several mediocre seasons, he went on to coach the Atlanta Dream for four years.

Marianne Stanley won the WNBA Coach of the Year award in 2002 by leading the Washington Mystics to a 17-15 record in her first year as head coach. Although the team finished in third place in the East, they made it all the way to the Conference Finals – losing to the Lynx.

Unfortunately, Stanley had a disappointing season the following year, going just 9-25 with the Mystics. She didn’t return after the 2003 season, but eventually made a comeback in 2020 when she signed with the Indiana Fever. It didn’t go well, leading them to a 14-49 record.

Suzie McConnell-Serio won the WNBA Coach of the Year award in 2004 after leading the Minnesota Lynx to an 18-16 record in her second season with the team – though they went just 0-2 in the playoffs. This was after a similar 18-6 finish the year before, going 1-2 in the playoffs.

Over the next two years, McConnell-Serio led the Lynx to just a 22-35 record – failing to make the playoffs each year. She was also a former WNBA player, as well as the women’s basketball head coach at Duquesne University and the University of Pittsburgh between 2007 and 2018.

John Whisenant won the WNBA Coach of the Year award in 2005 by leading the Sacramento Monarchs to a 25-9 season – it was the best season of his head coaching career. Not only that, but the Monarchs went on to win the championship that season, going 7-1 in the playoffs.

Whisenant had another impressive season in 2006, leading the Monarchs to a 21-13 record and a Western Conference Championship. After a disappointing year in 2009, he was named head coach of the New York Liberty – he led them to a 34-34 record in the 2011 and 2012 seasons.

Dan Hughes first won WNBA Coach of the Year in 2001 after leading the Cleveland Rockers to a 22-10 record. In 2007, he became the first coach since Van Chancellor to win the award twice (first to do so with two teams), leading the San Antonio Silver Stars to a 20-14 record.

Hughes has been a mainstay in the WNBA community since 1999. In addition to the Rockers and Silver Stars, he also coached the Charlotte Sting and Seattle Storm – who he won a title with in 2018. He has a career 286-312 record as a head coach in the WNBA (598 games).

Marynell Meadors won the WNBA Coach of the Year award in 2009 after leading the Atlanta Dream to an 18-16 record. The record might not look impressive, but it came after a year that saw the Dream win just 4 games. At the time, it was the biggest turnaround in WNBA history.

Leading up to that 2009 season, Meadors had just a 42-62 record as head coach in the WNBA. In the three years following that 2009 season, she led the Dream to a 51-41 record – including two Eastern Conference titles. She also coached at Florida State University and Texas Tech.

Brian Agler won the WNBA Coach of the Year award in 2010 after leading the Seattle Storm to a 28-6 record. They not only finished the season as the No. 1 seed in the Western Conference, but they went 7-0 in the playoffs en route to a WNBA Championship – it was a special season.

Carol Ross won the WNBA Coach of the Year in 2012 after leading the Los Angeles Sparks to a 24-10 record in her first year with the team. They went 2-2 in the playoffs, but failed to make it past the second round. She was previously the college head coach at Florida and Ole Miss.

In 2013, she proved that her first season in LA wasn’t a fluke – leading the team to yet another 24-10 record in the regular season. Unfortunately, the team once again flopped in the playoffs. She was fired during the 2014 season after the team posted a 10-12 record through 22 games.

Thibault left the Sun after the 2012 season and signed with the Washington Mystics. Despite the team having just five wins the season before, he led them to a 17-17 record – winning his third Coach of the Year award. He won a title with them in 2019 and is still head coach of the team.

Sandy Brondello won the WNBA Coach of the Year award in 2014 after leading the Phoenix Mercury to a 29-5 record in her first year as head coach – they went 7-1 in the playoffs and won the title that season. It was an improvement after her 14-20 record in San Antonio in 2010.

Brondello spent the next seven seasons in Phoenix, making it to the playoffs each season and making it to the WNBA Finals for a second time in 2021. She chose not to re-sign with the team and instead signed with the New York Liberty – leading them to a 16-20 record this season.

Bill Laimbeer first won WNBA Coach of the Year in 2003 after leading the Detroit Shock to a 25-9 record in his second season with the team – they also won the championship that year, despite having just nine wins the year before. He won three titles between 2003 and 2008.

Laimbeer left the Shock early in the 2009 season in hopes of landing an NBA coaching job. He returned to the WNBA in 2013 as head coach of the New York Liberty. In 2015, he won his second award after leading the Liberty to a 23-11 record. He has 306 wins as a head coach.

Nicki Collen won the WNBA Coach of the Year award in 2018 after leading the Atlanta Dream to a 23-11 record in her first season with the team – they were just 12-22 the year before. They went 2-3 in the playoffs, but lost to the Washington Mystics in five games in the semifinals.

Collen spent the next two seasons with the team, leading them to an abysmal 15-41 record and failing to make the playoffs both seasons. In 2021, she was hired as head coach at Baylor University – where she led the team to a 28-7 record and a trip to the 2022 March Madness.

Wade went just 28-28 over the next two seasons, but made up for it in the 2021 playoffs – going 8-2 and winning the title by year’s end. The dominance continued this past season, leading the Sky to a 26-10 record in 2022. They’re currently one game away from another Finals berth.

Curt Miller very well could be the next head coach to win the award three times. He first won WNBA Coach of the Year in 2017 after leading the Connecticut Sun to a 21-13 record in his second season with the team. He won it again last year after leading them to a 26-6 record.

Since missing the playoffs in 2016 (his first season), the Sun have been featured in the playoffs every single year. They made it to the WNBA Finals in 2019, but lost to the Washington Mystics. He has led the team to at least 21 wins in five of the past six seasons, which is impressive.

While things weren’t even close to being unanimous, Becky Hammon was the clear frontrunner to win WNBA Coach of the Year this season. Her team was tough to beat and she had them prepared for every game, which isn’t always easy for a first-year head coach  – but she thrived.

As we look ahead to next season, it could be anyone’s award. Sure, Hammon could certainly win it again – I wouldn’t be that surprised, especially since her team is going to be good for a long time. With that said, there are some other coaches that might find themselves winning it.

YOU MAY ALSO LIKE: 25 of the Most Historic Women in Sports

For example, Tanisha Wright and James Wade (who won it in 2019) were runner-ups this season and could be in line for improvements next season. We also can’t forget about 2014 WNBA COY winner Sandy Brondello (New York Liberty) and Noelle Quinn (Seattle Storm).