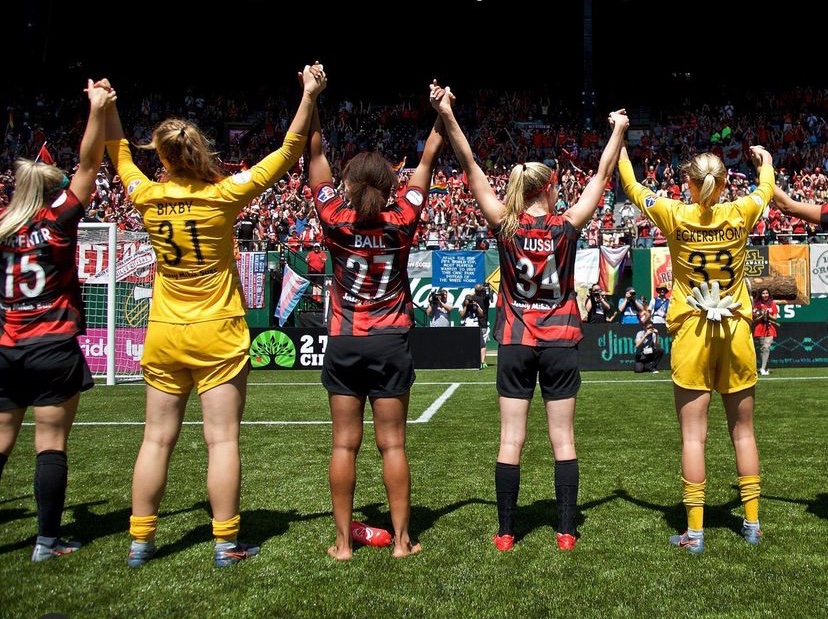 Professional soccer star Bella Bixby has taken to social media to share the unfortunate news of her father’s passing. The Portland-based goalkeeper announced that her father passed away by suicide right before the NWSL semifinals.

“I don’t feel like I owe anyone an explanation, but I do feel like I’m ready to say it. My father died this week by suicide,” the athlete wrote. “And I’ve surprised myself by how strong I’ve been, but I couldn’t hold it anymore. My playing for this city meant so much to him.”

And, there is no doubt that he looked down upon his daughter fondly as her team went up against Chicago Red Stars at Providence Park on Sunday night. Although they lost the game 2-0, there was an endless amount of support directed at Bixby, even setting up a memorial tribute to her late father.

An organization of local fans who call themselves the Rose City Riveters decorated various sections of the stands with flowers and jerseys, signifying their support for the athlete during this difficult time.

“I think regardless of the outcome tonight, I would’ve broke down — you can only hold it in for so long. Thank you, rose city, for the unconditional support this year. It was a good one,” Bixby included, taking note of the dedication fans showed to ease her troubles even the slightest bit.

She continued with the sentiments, “And thank you to the @PDXRivetersSG for having my dad as an honorary capo tonight.”

“We love you, Bella,” her own team wrote in response to her statements. In addition, the Chicago Red Stars also lent their support to the goalkeeper by tweeting out the phrase, “Our thoughts and prayers go out to you and your loved ones, Bella.”

Bixby’s teammates and coaching staff were also very outspoken about lending their sympathies to the athlete. Thorns captain, Christine Sinclair, even shared, “[Love] you Bella. Your father would be so proud of you. Not the result we wanted, but it is an honor to be on this team. Thank you Rose City for all the love and support this year.”

“BELLA my baby Tiger, I’m so so proud of you. The way you handled last week is incredible. You are such a strong person,” Nadine Angerer, the Thorns’ Director of Goalkeeping, stated.