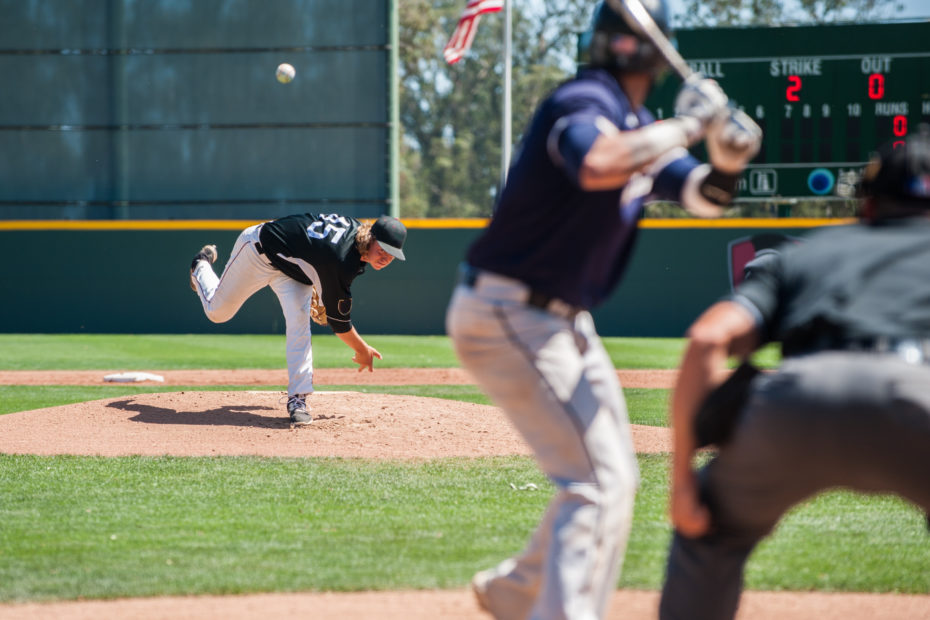 20 of the Best College Baseball Teams Ever

Through the years, the game of baseball has changed drastically since that first game in 1859. The rules are different, the players are more talented, and the league is more competitive than ever before. Winning doesn’t come easy, which is why celebrate those that do it consistently.

What Are the Best College Baseball Teams Ever?

These are the teams that dominated their season better than anyone else. They played well together, they played for each other, and they didn’t play hero or selfish baseball. They understood what it took to win at the college baseball level and they proved it each game.

With so many factors to consider and so many great teams to choose from, narrowing them down to the top-20 won’t be easy. A lot of good teams will be left off the list and there will be plenty of difficult decisions to make, but let’s take a look at the best college baseball teams ever!

The 2003 Rice Owls baseball team started the season 3-1 before going on a 30-game winning streak that spanned from February 18th until April 9. They would finish the regular season with a 48-10 record, go 3-0 in the Houston Regional, and 2-1 in the Houston Super Regional.

After defeating SW Missouri State and Texas in the World Series, the Owls defeated Stanford Cardinal in a best-of-three series to win the championship and bring their overall record to 58-12. Enrique Cruz and Vincent Sinisi had 10 home runs and Jeff Niemann went 17-0 in 18 starts.

The 1957 Cal Golden Bears were led by George Wolfman, one of the greatest college baseball coaches in history. They went 35-10 on their way to winning their first national championship in school history. They outscored opponents 30-3 in five games in the College World Series.

Doug Weiss was named team MVP after setting records in wins (14), complete games (12), and innings pitched (149.0) — all of which still stand today. He also set records in strikeouts (107) and ERA (1.51), both of which have since been surpassed by other Cal players.

The 1992 Pepperdine Waves finished the regular season 40-10-1 and won their final 12 games as they prepared for the West Regional. They won four of five games in the West Regional and opened the College World Series off with two-straight shutouts against Wichita State and Texas.

The final two games of the College World Series weren’t as easy, winning 5-4 against Texas and 3-2 against Cal State Fullerton in the final. Later that year, Derek Wallace was drafted 11th overall by the Chicago Cubs and Dan Melendez was drafted 57th overall by the LA Dodgers.

The 2002 Texas Longhorns finished the regular season 43-13, including a 19-8 record in the Big 12. They held winning streaks of eight and ten games during the season, proving to be a streaky team. After losing their first game of the Big 12 Tournament, they won their next five games.

The Longhorns then went 3-0 in the Austin Regional and 2-1 in the Austin Super Regional before arriving at the College World Series. After winning three close games, Texas defeated the South Carolina Gamecocks in the series final thanks to a high-powered offense that scored 12 runs.

The LSU Tigers had won the College World Series in 1991 and 1993, so they had already established themselves as a dominant team well ahead of the 1996 championship. They opened the season on a 13-game win streak and ended the regular season with a record of 43-13.

While the Tigers failed to win the SEC Championship, they went 4-0 in the South II Regional and 4-0 again in the College World Series. The national championship game against Miami was a thriller, ending 9-8 in favor of LSU after Warren Morris hit a home run in walk-off fashion.

Known for their dominant pitching rotation, the 1975 Texas Longhorns finished the regular season 49-5 — including winning streaks of 15 and 18 games in March and April. The Longhorns then went 3-0 in the South Central Regional, outscoring opponents 21-8 in the process.

After defeating Oklahoma in their first game of the College World Series, the Longhorns lost 2-5 to Arizona State. The team quickly recovered, winning their next three games — including outscoring South Carolina 22-7 in the final two games of the 1992 College World Series.

The 2012 Arizona Wildcats didn’t have any batters hit more than five home runs all season long, but they knew how to win and had quality pitching from the start. After finishing the regular season 38-18, Arizona went 3-0 in the Tucson Regional and 2-0 in the Tucson Super Regional.

In five games at the College World Series, the Wildcats outscored opponents 27-8 en route to winning each game. They finished the NCAA Tournament 10-0 and had five players drafted within the first nine rounds of the 2012 draft — three of which have since made MLB debuts.

The Trojans would win all five games at the College World Series, though they didn’t win any of them by more than two runs. They were no stranger to close games, proving to be clutch when they needed it most. They had 11 players drafted in the 1968 regular and secondary drafts.

The 1951 Oklahoma Sooners baseball team helped the campus become the first school to win three national championships in the same year — their football team and wrestling team won it in 1951, as well. They weren’t expected to have a good season, but ultimately prevailed in the end.

They would go on to defeat Houston in three-straight games at the District Playoffs, outscoring the team 13-8 in the process. The Oklahoma Sooners then beat Ohio State, Springfield, and Southern California before defeating Tennessee 3-2 in the national championship game.

The first College World Series ever took place in 1947 and the Cal Golden Bears were the first to be named champions. They finished the regular season 27-10 before moving on to the Western Playoff. There, they defeated Denver 3-1 and Texas 13-2 before the World Series.

The Golden Bears opened the World Series with a dominant 17-4 victory over Yale and followed that up with a close 8-7 victory the following day. They finished the season with an overall record of 31-10 and will forever be remembered as the first ever College World Series champions.

The 2000 LSU Tigers opened the season with six straight wins, but went on a five-game losing streak to bring their record to 6-5 early on in the year. They had an 11-8 record by mid-March, but would win 18 of their next 20 games — bringing their record to 29-10 by mid-April.

The Trojans went 2-0 in the Pacific-8 Playoffs and 3-0 in the District 8 Playoffs. In five games at the College World Series, the USC Trojans outscored their opponents 38-13 and won all games en route to their 11th national championship. They went a perfect 10-0 in the NCAA Tournament.

The 1977 Arizona State Sun Devils knew it was going to be a good year when they began the season 10-0. They would then close out the regular season on a 15-game winning streak. Bob Horner led the team with 22 home runs and 87 RBIs, while Dave Hudgens had 73 RBIs.

The Sun Devils got the postseason off to a good start, winning all three games of the Rocky Mountain Regional. After a 10-7 win over Clemson in the College World Series opener, the Sun Devils lost to Southern Illinois. They won their next four games, outscoring their opponents 26-7.

This is the third time we’re mentioning one of Rod Dedeaux’s USC baseball teams and for good reason. He had them among the nation’s best consistently throughout his 45-year career with the team. In our eyes, his 1973 USC Trojans were one of the best college baseball teams ever.

The team started the season 12-0 before losing three-straight to Arizona State. It was the only time they would lose consecutive games all year long, finishing the regular season 40-11. They then went 10-0 in the NCAA Tournament, outscoring opponents 23-13 in the World Series.

Skip Bertman is another coach that is finding himself on this list for a third time. His 1997 LSU Tigers will go down as one of the best college baseball teams ever. The team hit 188 home runs, which is an NCAA record, and hit at least one home run in all 70 games played in 1997.

The team was led by Brandon Larson, who hit 40 home runs, and Mike Koerner, who hit 22 home runs. The Tigers had nine different players hit more than 10 home runs and were led by Patrick Coogan (14-3), Doug Thompson (12-3), and Joey Painich (9-2) on the mound.

It would be wrong to not mention the 2019 Vanderbilt Commodores as one of the best college baseball teams ever. They finished the regular season with a 45-10 overall record and 23-7 record in the SEC. They won 18 of their last 19 games, including 13 straight at one point.

The Commodores won the SEC Tournament after going 4-0 and outscoring opponents 36-15. They then went 3-0 in the Nashville Regional, 2-1 in the Nashville Super Regional, and 5-1 in the College World Series. J.J. Bleday led the team with 27 home runs and Stephen Scott had 14.

The 2001 Miami Hurricanes finished the regular season with a 44-12 record, which included five win streaks of at least five games and a win in each of their last eight games. IF Kevin Brown led the team with 15 home runs and C Danny Matienzo led the team with 64 runs batted in.

This isn’t the first time Augie Garrido is being featured on this list, but it’s the first as head coach of the Cal State Fullerton Titans. Seven years before his impressive run with the 2002 Texas Longhorns, Garrido helped lead Cal State Fullerton to a 57-9 overall record (18-3 in Big West).

After winning the final seven games of the regular season, the Titans continued that win streak into the playoffs. They went 3-0 in the Big West Tournament and 4-0 in the South Regional before winning all four games in the World Series, ending the year on a 18-game win streak.

The Longhorns then went 3-1 in the SWC Tournament, 5-1 in the Central Regional, and 5-0 in the College World Series. Roger Clemens and Calvin Schiraldi were drafted in the first round of the 1983 MLB Draft, Mike Brumley went in the second round, and Jeff Hearron in the fourth.

What Are the Best College Baseball Programs of All-Time?