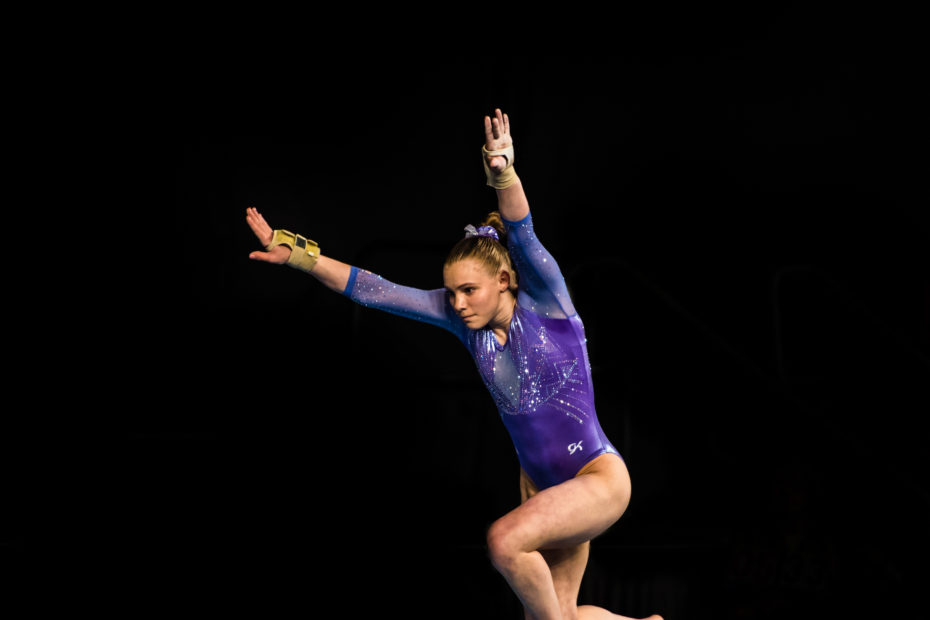 20 College Women Gymnastics Stars You Should Be Watching

Before they can get to the championship round, these women gymnastics stars will first have to make it through the regional round – which starts on March 30th and comes to an end on April 2nd. The four host teams for regionals include Oklahoma, Washington, Auburn, and NC State.

The University of Michigan, who will compete in the Raleigh Regional at NC State, has a chance to repeat as national champions. With that said, Oklahoma has won three of the past five championships. They won in 2016, 2017, and 2019. In 2018 and 2021, they were runner-ups.

RELATED: 20 Famous Gymnasts From the US With the Most Olympic Medals

Who Are the Best Women Gymnastics Stars Today?

The 2022 season for women gymnastics has been nothing short of exciting. Not only has it boasted one of the most talented freshman classes of all-time, but it brought us a plethora of perfect-10s and even more incredible performances that left us with our jaws on the floor.

There were a total of 10 Olympic competitors in the NCAA ranks this season – including four of Team USA’s six-member squad from 2020. It’s going to make the 2022 championship that much more exciting for gymnastics fans across the country as these stars take center stage.

With the regular season behind us and the national tournament less than one week away, there’s no better time to look back at 20 of the best women gymnastics stars of 2022. Some of these stars have already made it to the Olympic stage, while others likely will in the near future.

Jocelyn Moore is a 5’2’’ freshman gymnast at the University of Missouri. She was born in Rochester, NY, raised in Hillsborough, NY, and is scheduled to graduate college in 2025. She’s an all-around gymnast, but her favorite event is the vault. She’s a 2022 WCGA All-American.

Moore is currently ranked No. 6 in the country in the vault apparatus, according to the final NCAA power rankings. Speaking of her vault skills, she scored an impressive 9.95 at the SEC Championships just a week ago, which ended up being tied for second in the conference.

Sydney Soloski is a 5’0’’ fifth-year senior at the University of Utah. She’s a four-time All-American, two-time All-Pac-12, two-time WCGA Scholastic All-American, and was the 2021 Pac-12 co-champion in the floor apparatus. She has 13 career victories at the collegiate level.

Ragan Smith is a 4’11’’ junior at the University of Oklahoma. She began training in gymnastics at the age of four because her mother was a coach. She was a member of the United States national team between 2014 and 2018. During that time, she earned three gold medals.

Grace McCallum is a 5’3’’ freshman at the University of Utah. She has been a member of the United States national team since 2018 and has won seven gold medals during that time. She competed at the 2020 Summer Olympics and earned a silver medal in the team event.

McCallum is currently ranked No. 5 in the bars apparatus. At the Pac-12 Championships, she won the uneven bars title with a perfect 10 (second of the season), co-won the floor title, and finished second all-around. She earned three gold medals at the Pan American Championships.

Ona Loper is in her fifth-year at the University of Minnesota. She has been as consistent as you can be in each apparatus over the past five years, but her best discipline is the vault. She’s majoring in ICP health and wellness thematic, and minoring in public health and global studies.

Loper is currently ranked No. 5 in the country at the vault apparatus. She set new career-highs in all four events this season, as well as a career-high in the all-around and a perfect 10 at the vault for the third-straight season. Her career-best all-around score was 39.750 (set in 2022).

Gabby Wilson is a junior at the University of Michigan. She’s a four-time WCGA All-American, was an individual regional champion in the floor apparatus, a Big Ten Champion (2022), and a Big Ten floor Champion (2021), and has 26 career event titles in her illustrious career.

Haleigh Bryant is a 5’5’’ all-around gymnast at Louisiana State University (LSU). She had quite the freshman season in 2021 as she was named the NCAA Vault Champion, SEC Vault Champion, All-SEC honors, and a WCGA All-American in vault, beam, and all-around.

Bryant is currently ranked No. 4 in the country in the vault apparatus and has a total of 14 individual titles in her career. She has earned two perfect 10s in the vault and has career-highs of 9.900 (twice) at the bars, a 9.925 at the balance beam, and a 9.975 at the floor exercise.

Mya Hooten is a sophomore at the University of Minnesota and competes in the vault, uneven bars, and floor exercise (her all-time favorite event). She set a career-high of 9.975 at the vault this season and tied career-highs of 9.875 on the beam and 10.00 on the floor. She’s consistent.

Cristal Isa is a 5’3’’ senior at the University of Utah. She’s a member of the team’s leadership council, which goes to show how much she means to the team. She had an incredible career before joining Utah and has only gotten better in the past four years. She will return in 2023.

Audrey Davis is a 5’3’’ sophomore at the University of Oklahoma. She specializes in the vault, bars, and beam apparatuses. Last year as a freshman, she was a four-time Big 12 Newcomer of the Week, WCGA First-Team Regular Season All-American, and All-Big 12 Bars honoree.

Davis is currently ranked No. 3 in the country at the uneven bars apparatus. She’s one of the podium favorites for this year’s national championship and very well could help her school to another title. Her career-high in the vault, uneven bars, and balance beam apparatuses is 9.950.

Bowers is currently ranked No. 2 in the country in the vault apparatus. She earned All-Big 12 honors in the vault, bars, and floor exercise, as well as All-American First-Team in vault and All-American Second-Team in bars. She tied for first in the floor at the Big 12 Championship.

Nya Reed is a 5’3’’ senior at the University of Florida. She specializes in the vault and floor exercise apparatuses where she has career-highs of 9.925 and 10.000, respectively. She’s majoring in applied physiology and kinesiology and has won 14 Virginia state titles since 2010.

Reed is ranked No. 1 in the country in the floor exercise apparatus. She’s a two-time NCAA All-American, one-time Regular Season All-American, three-time SEC Specialist of the Week, and one-time WCGA Scholastic All-American. She consistently gets above a 9.900 in her events.

Maile O’Keefe is a 5’2’’ junior at the University of Utah. She’s a two-time national champion (uneven bars and floor exercise), seven-time All-American, four-time All-Pac-12, and four-time Pac-12 Champion. She has hit 84 of her 84 career routines and has 36 career wins.

Sunisa Lee is a 5’0’’ freshman at Auburn University. She has been a member of the US National Team since 2017, earning three Olympic medals in 2020 – including an all-around gold medal. She also earned three medals (including one gold) at the World Championships in 2019.

Lee is currently ranked No. 1 in the country on the uneven bars and No. 4 on the balance beam. She has achieved a perfect 10.0 four times this season, twice on the beam and twice on the bars. She earned First-Team All-American honors on the bars, beam, and all-around this year.

Raena Worley is a 4’11’’ junior at the University of Kentucky and is majoring in kinesiology and communication. She began training in gymnastics in 2005 at the age of four after her parents got her lessons for her birthday. She quickly fell in love with the sport and has been at it ever since.

Worley is currently ranked No. 6 in the all-around apparatus and while her numbers aren’t always the highest in competition, she’s more consistent than most gymnasts today. During the 2022 season, she was named First-Team All-American in all-around and Second-Team in bars and floor.

Sierra Brooks is a junior at the University of Michigan. In addition to helping her team win the 2021 NCAA Championship, she’s a four-time WCGA All-American (four apparatuses) and three-time individual regional champion on the beam, at the vault, and all-around (all in 2021).

Abby Heiskell is a senior at the University of Michigan and is majoring in applied exercise science (kinesiology). In addition to helping her team win the 2021 NCAA title, she’s a three-time WCGA All-American and has earned 14 career event and all-around titles in her college career.

Trinity Thomas is a 5’3’’ senior all-around gymnast at the University of Florida. She was a member of the US National Team between 2016 and 2020, earning a gold and two silver medals at the 2018 Pan American Championships. She’s an applied physiology and kinesiology major.

Jade Carey is a 5’1’’ freshman all-around gymnast at Oregon State University. She was supposed to join the team in 2018, but decided to defer while training for the Olympics. This was her first year on campus and she made it a good one, earning three perfect 10s this season.

Carey is currently ranked No. 1 in the country in the all-around apparatus and No. 2 on the uneven bars. She earned First-Team All-American honors in all five apparatuses – this coming two years after winning a gold medal on the floor at the 2020 Olympics. She has five gold medals for Team USA.

Who Are the Greatest Women Gymnastics Stars of All-Time?

The women listed above have had an incredible college gymnastics season and will likely enjoy long careers in the sport. In fact, some of which have already earned medals on the Olympic stage and very well could write their name among the sport’s all-time greatest gymnasts.

YOU MAY ALSO LIKE: Simone Biles and Jonathan Owens Announce Engagement

While we have to wait two more years before the 2024 Olympics, gymnastics fans will have plenty to celebrate until then – including the annual national championship, which usually takes place in April. Michigan and Oklahoma have dominated recently, but who will win this year?