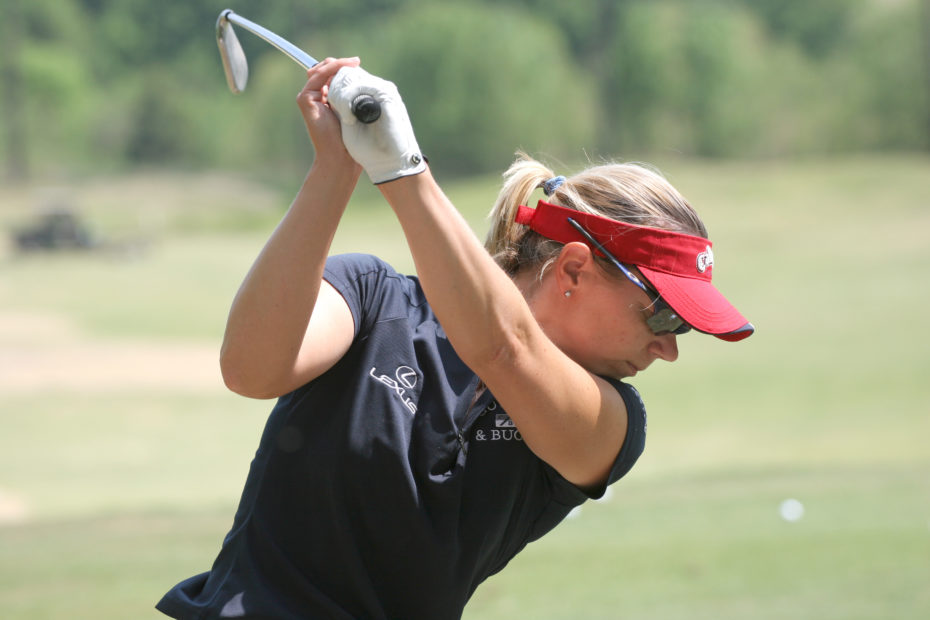 25 of the Best Female Golfers of All-Time

The best female golfers of all-time were instrumental in the development, growth, and evolution of women in a sport that was largely dominated by men from the 1400s up through the 1800s. At the turn of the century, women started to emerge as true competitors and contenders in golf.

By 1932, amateur women golfers were competing in the world’s first Curtis Cup between Great Britain, the United States, and Ireland. Two years later, Helen Hicks made history as the first female professional golfer. She went on to win two major tournaments over the next six years.

In the late-1930s and through the 1940s, Babe Zaharias and Patty Berg helped further the continued excellence of women golfers — two names you’ll find on our list of the best female golfers of all-time. By 1950, the LPGA was formed and things have taken off since then.

RELATED: The 20 Hardest Golf Courses in the World

Who Are the Best Female Golfers of All-Time?

Over the past 200+ years, we’ve witnessed thousands of female golfers try to etch their name in history and many of them have enjoyed long, successful careers as a result. Of course, there are only a select few that can be considered among some of the best female golfers of all-time.

Lydia Ko started playing golf as a five-year old and began her rise to excellence at the age of seven when she competed in the New Zealand national amateur championships. She went pro in 2014 while she was still in school, but she had already won several tour events at that point.

Since getting her first LPGA tour win as a pro in 2014 as a 17-year old, Ko has won a total of 16 events. Of those events, two of them were Major championships — The Evian Championship and the ANA Inspiration. She’s still just 24 years old and will continue to climb up this list.

Yani Tseng found success as an amateur from 2002-2006, winning several tournaments before turning pro in 2007. The following year, Tseng became the youngest player to win the LPGA Championship and the second-youngest to win an LPGA major. She got off to a quick start.

Jane Blalock started playing golf at the age of 13 and won several championships as an amateur while she studied at Rollins College. She turned pro in 1969 and made a good first impression after being named the LPGA Rookie of the Year. It was a great start to her career.

Speaking of female golfers with 27 career wins, Lorena Ochoa deserves her spot on our list of the best female golfers of all-time. She began golfing at the age of five, winning her first state event one year later and her first national event two years later. She was destined for stardom.

She dominated the sport during a solid two-year college career and turned pro in 2002, winning 27 tournaments and two majors over the next six years. She was an LPGA Rookie of the Year and four-time LPGA Player of the Year. Her $14,863,331 career earnings ranks fifth all-time.

Donna Caponi started playing golf at the age of five and won the Los Angeles Junior title as an 11-year-old. She continued to excel as an amateur up until 1965, which is the year she turned pro. While she didn’t win much in the early years of her career, she eventually turned the corner.

In 1969, she achieved her first LPGA victory at the US Women’s Open and repeated as winner the following year — becoming the second female to do so. She finished her career with 24 total wins and four major wins after winning the Women’s PGA Championship in 1979 and 1981.

Se-ri Pak, also known as Pak Se-ri, began playing golf at a young age in Daejeon, South Korea. She was her high school’s best golfer and eventually moved to Seoul to continue her training. She eventually turned pro in 1996 at the age of 19 and joined the LPGA full-time in 1998.

Beth Daniel helped lead Furman University to a 1976 national championship alongside Betsy King, another golfer on this list. She also enjoyed an incredible amateur career winning the U.S. Women’s Amateur twice (1975 and 1977) and the Women’s Western Amateur in 1978.

Amy Alcott turned pro in 1975 after graduating from high school. It didn’t take long for her to transition to the pro league, notching a win in her third tournament. Her efforts in 1975 resulted in her being named LPGA Tour Rookie of the Year. Alcott’s golf career took off from that point.

She won five major tournaments over her 17-year career, including the U.S. Women’s Open in 1980, du Maurier Classic in 1979, and the ANA Inspiration in 1983, 1988, and 1991. She was the player that started the tradition of jumping into Poppie’s Pond after winning the Dinah Shore.

Carol Mann enjoyed a lot of success as an amateur, winning the Western Junior, Chicago Junior, and Chicago Women’s Amateur from 1958-1960. She decided to turn pro in 1960 and joined the tour full-time the following year. It took her a few years to record her first victory.

As an amateur golfer, Sandra Haynie won the 1957-58 Texas State Publinx, 1958-59 Texas Amateur, and 1960 Trans-Mississippi titles. She began her professional career in 1961 and won her first tournament as a pro in 1962 at the Austin Civitan Open. Things only got better for her.

Nancy Lopez enjoyed a long and successful career as a professional golfer. Things started to click at the age of 12 when she won the New Mexico Women’s Amateur. She then won the U.S. Girls Amateur at ages 15 and 17, as well as tying for second at the U.S. Women’s Open at 18.

She joined the tour full-time in 1978 and had a monster rookie year, winning nine tournaments (five-straight) and earning several awards — including the Vare Trophy, Rookie of the Year, and Player of the Year, which she would win four times in her career. She was a one-of-a-kind golfer.

Pat Bradley might not have as many career wins as Lopez, Carner, Haynie, or Mann, but she won when it mattered most and finished her career with more major wins than any of them. She joined the tour in 1974 after enjoying a great deal of success as an amateur from 1967-1973.

She got her first win as a professional at the 1996 Girl Talk Classic. She won three titles in 1978 and led all female golfers with four in 1983 and five in 1986. Her 1986 campaign was special, winning three of four LPGA major titles and earning her first of two Player of the Year awards.

Juli Inkster was a three-time All-American at San Jose State as she built herself a very successful amateur career. She won three consecutive U.S. Women’s Amateur events from 1980-1982, becoming the first female to achieve that feat since 1934. She was unstoppable.

Betsy King was teammates with Beth Daniel at Furman University and was a member of the 1976 national championship squad. She turned pro in 1977, but wouldn’t earn her first win as a professional until 1984. Of course, that’s the year her career took a turn for the better.

Inbee Park is just 33 years old and has accomplished more than most golfers have in her 13-year career. She won three-straight major championships in 2013, won the Women’s PGA Championship three times in a row, and is the youngest player to with the U.S. Women’s Open.

She’s one of just nine female golfers to win at least seven major championships and her $17,850,220 career earnings currently ranks fourth all-time. She doesn’t seem to be slowing down anytime soon, so you can expect to see her continue to climb this list in the near future.

At 13 years old, Patty Sheehan was ranked as one of the country’s top junior snow skiers. In high school, she started to dominate the golf scene in Nevada and won a plethora of titles as an amateur. She attended both the University of Nevada, Reno and San Jose State University.

Karrie Webb began her amateur and professional career in Australia, but eventually found her way to the LPGA Tour in 1996. She won four tournaments in her first season and was named Rookie of the Year, as well as LPGA Money Winner with over $1 million in 1996 earnings.

She would later win her first major championship in 1999. Webb was named LPGA Player of the Year, LPGA Money Winner, and winner of the Vare Trophy in 1999 and 2000. Her 41 wins ranks 10th all-time and she’s one of nine female golfers with at least seven major championships.

Not many athletes can say they’ve done what Babe Zaharias did between 1930-1955. She competed in the 1932 Summer Olympics and won two Gold Medals in track and field. She then turned her focus to golf and went on to become one of the best female golfers of all-time.

Zaharias finished her career with 41 total wins and was one of just five female golfers with at least 10 major championships. She won the Western Open four times, the U.S. Women’s Open three times, and the Titleholders Championship three times. She was a true golf champion.

Betsy Rawls isn’t one of the five female golfers to win at least 10 major championships — she won eight in her career — but she is one of six female golfers with at least 55 total career wins. She didn’t start playing golf until the age of 17, but found quick success as an amateur.

Louise Suggs began playing golf at a young age and eventually won the Georgia State Amateur at just 16 years old. She won a variety of other amateur titles before turning pro in 1948. In 1950, she was one of the pioneers that founded the Ladies Professional Golf Association (LPGA).

Speaking of the LPGA founding members, we can’t forget Patty Berg on our list of the best female golfers of all-time. She was the first president of the LPGA, won 60 total championships (fifth all-time), and won 15 major championships (most all-time). She was a true competitor.

She turned pro in 1940 after winning 29 titles as an amateur. As a pro, she won the Western Open seven times, the Titleholders’ Championship seven times, and the U.S. Women’s Cup once. She also served in the Marine Corps and was a speed skater in the winter months.

Annika Sörenstam is the greatest female golfer that doesn’t represent the United States. She’s the only female to shoot a 59 in a real competition, her $22,577,025 career earnings is more than any other female golfer, and her eight Player of the Year awards is the most all-time.

Sörenstam ranks second all-time with 72 total wins and is one of just five female golfers to win at least 10 major championships. She was Rookie of the Year in 1994, an eight-time LPGA Tour Money Winner, and six-time Vare Trophy winner. Not many female golfers won as often as her.

At the top of our list of the best female golfers is Mickey Wright. She played for Stanford University and enjoyed success as an amateur before turning pro in 1954 and joining the tour in 1955. Her 82 total wins and 13 major championships both rank second among female golfers.

Who Are the Best Female Golfers Right Now?

YOU MAY ALSO LIKE: The 25 Best United States Golf Courses

One of the wonderful things about golf is you never know who’s going to show out each tournament and it’s not always the best female golfers that win the event. It seems to be someone different each time, which helps keep things interesting for the viewers at home.