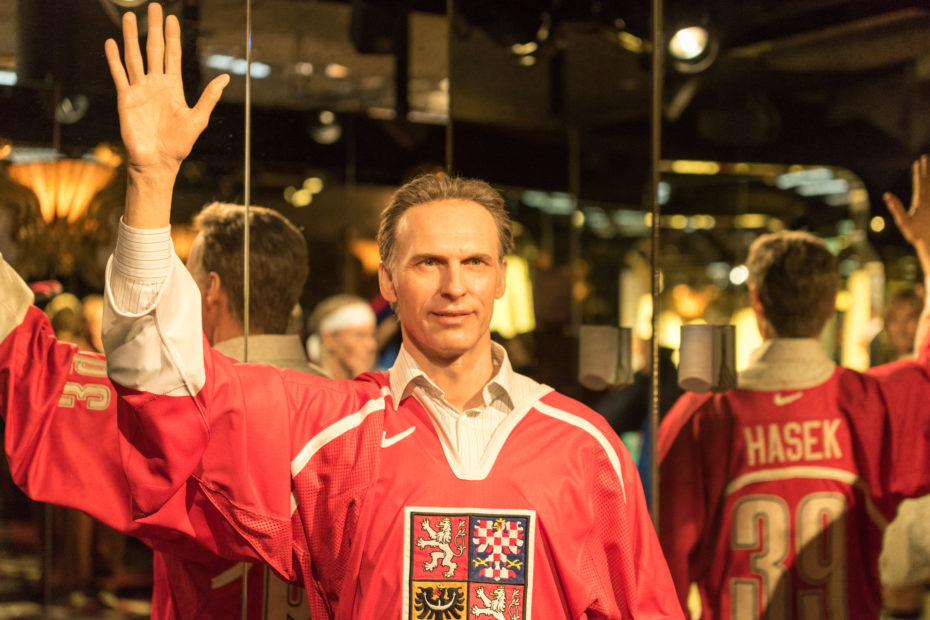 20 of the Best Hockey Goalies of All-Time

A reliable goalie can be a huge difference-maker for any NHL team, but the best hockey goalies of all-time took that responsibility to the next level. They exemplified greatness every time they took the ice and were consistently putting their team in a position to win – which they did often.

Who Are the Best Hockey Goalies of All-Time?

When you hear the names Mike Richter, Henrik Lundqvist, Roberto Luongo, and Curtis Joseph, you might think they’re no-brainers to be included on the list of the best hockey goalies of all-time – especially if that list includes 20 goalies! Well, that might not be the case here.

Each of those four players are in the top-10 of goalie wins all-time and while they’re considered four of the best hockey goalies of all-time, they aren’t found on our list below. The history of the NHL runs too deep and there are simply too many hockey goalies that deserve recognition.

Frank Brimsek played 10 seasons in the NHL – nine with the Boston Bruins and one with the Chicago Black Hawks. He finished his career with a 252-182-80 record in 514 regular season games and a 32-36 record in 68 playoff games. He allowed 2.70 goals per game in his career.

Brimsek was inducted into the Hall of Fame in 1966. He won two Stanley Cups with the Bruins in 1939 and 1941, was a two-time Vezina Trophy winner, a Calder Memorial Trophy winner, and an eight-time All-Star – he was selected as an All-Star in each of his first eight NHL seasons.

Clint Benedict played 13 seasons in the NHL – seven with the Ottawa Senators and six with the Montreal Maroons. He finished his career with a 189-142-28 career record in 362 regular season games and an 11-12-5 record in 28 playoff games. He allowed 2.32 goals per game.

Despite playing just seven seasons, Durnan was a six-time Vezina Trophy winner and helped lead the Montreal Canadiens to a Stanley Cup victory in 1944 and 1946. The only season he didn’t win the Vezina was in 1947-48, but he was inducted into the Hall of Fame in 1964.

Belfour was inducted into the Hall of Fame in 2011. He was the 1990-91 Calder Memorial Trophy winner, a two-time Vezina Trophy winner, a four-time William M. Jennings Trophy winner, and five-time All-Star. He also helped lead the Dallas Stars to a Stanley Cup victory in 1999.

Fuhr, a former eighth overall draft pick, was inducted into the Hall of Fame in 2003. He was a William M. Jennings Trophy winner, Vezina Trophy winner, two-time All-Star, and four-time Stanley Cup champion in 1984, 1985, 1987, and 1988 – going back to back on two occasions.

Georges Vezina played nine seasons in the NHL – all with the Montreal Canadiens – before being diagnosed with tuberculosis and passing away in 1926. He finished his career with a 103-81-5 regular season record (3.28 GAA) and a 10-3 playoff record (1.32 GAA).

Vezina was inducted into the Hall of Fame in 1945. Every year since his sudden death, the goalie with the lowest goals against average for the season has been awarded the Vezina Trophy in his honor. Since 1981, the trophy has been awarded to the most outstanding goalie.

Price should be a future Hall of Fame player when he decides to retire. His incredible 44-win season earned him the Lindsay, Vezina, Jennings, and Hart trophies. He posted at least 30 wins five times in his career and at least 20 wins 10 times in his career. He has 49 career shutouts.

Bernie Parent played 13 seasons in the NHL with the Philadelphia Flyers, Boston Bruins, and Toronto Maple Leafs. He finished his career with a 271-198-119 regular season record (2.55 GAA) and a 38-33 playoff record (2.44 GAA). He had 54 career shutouts and nine assists.

Parent was inducted into the Hall of Fame in 1984. He won back-to-back Stanley Cup titles with the Philadelphia Flyers in 1974 and 1975. During those two seasons, he won a total of 91 games with 24 shutouts and was awarded the Vezina Trophy and Conn Smythe trophy each season.

Vladislav Tretiak never played in the NHL, but he was a force in the Soviet Union – where he played 482 games for CSKA Moscow in the Soviet League. During a 14-year stretch with the team, he helped lead them to 13 league titles and won the MVP award five times in that time.

Tretiak was also a force in international play. Representing the Soviet Union, he made four consecutive Olympics appearances – winning three gold medals and one silver medal. He also helped lead them to 10 gold, 2 silver, and one bronze medal at the World Championships.

Hall was inducted into the Hall of Fame in 1975. He won the Calder Memorial Trophy in 1956, helped lead the Chicago Blackhawks to a Stanley Cup title in 1961, and was a three-time Vezina Trophy winner. He also won the Conn Smythe Trophy for his excellence during the title run.

Marc-Andre Fleury was the first overall draft pick by the Pittsburgh Penguins in 2003 and spent 13 seasons with the team. He has since played for the Vegas Golden Knights, Chicago Blackhawks, and Minnesota Wild. He has a 520-299-87 regular season record (2.57 GAA).

Fleury has won three Stanley Cup titles with the Pittsburgh Penguins, including two consecutive in 2016 and 2017. He has a 92-73 record in the playoffs (2.54 GAA). He’s a future Hall of Famer who finally won his first Vezina Trophy with the Golden Knights during the 2020-21 season.

Dryden was inducted into the Hall of Fame in 1983. He was a six-time Stanley Cup champion, including four consecutive between 1976 and 1979. He was also a five-time Vezina Trophy winner, one-time Conn Smythe Trophy winner, and one-time Calder Memorial Trophy winner.

Sawchuk was inducted into the Hall of Fame in 1971. He was a four-time Stanley Cup champion – three with the Red Wings and one with the Maple Leafs – and four-time Vezina Trophy winner, including back-to-back in 1952 and 1953. He won the Calder Memorial Trophy in 1951.

Brodeur was inducted into the Hall of Fame in 2018. He helped lead the Devils to three Stanley Cup titles in 1995, 2000, and 2003. He was a four-time Vezina Trophy winner and five-time William M. Jennings Trophy winner. He had 13 seasons of at least 30 wins in his career.

Who Are the Best Hockey Goalies Today?

Goalies are extremely important to an NHL team’s success. Without a quality and reliable goalie, you better be prepared to score at least four goals per game to give yourself a chance at winning. Otherwise, you’ll be playing catch-up most of the game – which never ends well.

YOU MAY ALSO LIKE: 20 of the Greatest Sports Calls of All-Time

Each of those goalies finished the 2021-22 NHL season with more than 30 games – they were the only ones to do so this season. Markström led the league with nine shutouts, Shesterkin led the league in save percentage (.935), and Bobrovsky had the best overall record at 39-7-3.