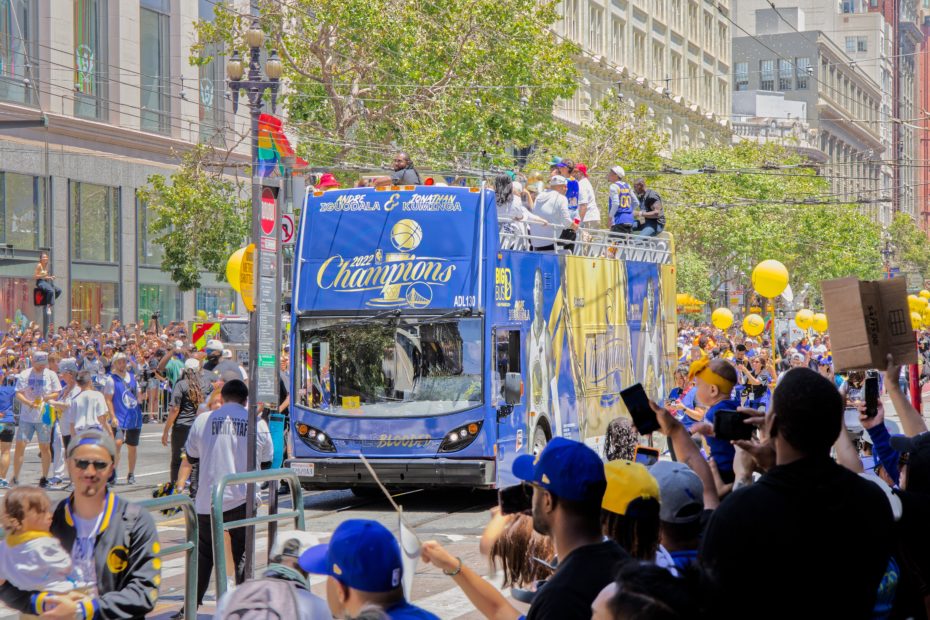 As the Warriors Celebrate Their Win, Here Are 15 of the Best Moments From Their Championship Parade

It has been a hell of a 2022 NBA season, but it finally came to an end on June 20, 2022 when the Golden State Warriors took to the streets of San Francisco for their championship parade. It was the fourth time they’ve done so in the past eight years, continuing an incredible title run.

Although the team looks much different than in recent year’s past – most notably missing Kevin Durant – the same three core guys are at it again in Stephen Curry, Klay Thompson, and Draymond Green. The dynasty they built may never be duplicated, at least not anytime soon.

The Warriors ended the regular season as the No. 3 seed in the Western Conference with a 53-29 record (they were 39-33 last year) en route to their seventh title in franchise history. They defeated the Nuggets, Grizzlies, and Mavericks before defeating the Celtics 4-2 in the Finals.

The championship parade is something every NBA player dreams of after winning a ring. Being with thousands upon thousands of your fans as you celebrate the biggest achievement in the sport is something that can’t be compared to everything else – you’re the center of attention!

When the Warriors started their championship parade on Monday, it was special. Many people said the Warriors wouldn’t get back to this moment – not without Kevin Durant, at least. Fast forward two years and KD got swept in the first round and the Warriors are now back on top.

It’s a beautiful story that couldn’t have been written any better. It was a grind of a season and they deserve to relish in this moment. In fact, speaking of moments, let’s take a look at some of the most memorable, hilarious, and relatable moments from the Warriors’ championship parade.

Klay Thompson was on his way to the championship parade in a way only he can pull off. He pulled up to the Bay in his boat, but he ended up losing his championship hat on the way. He caught it all on video and his immediate reaction was to laugh it off and say, “I lost my hat!”

Thompson had a hard time shooting the ball consistently throughout the series, but managed to average 17.0 points, 3.0 rebounds, 2.0 assists, 1.3 steals, and 0.5 blocks in 38.3 minutes per game – he played more minutes than Curry and played the second-most minutes on the team.

14. Captain Klay Drops One of His Four Rings

It wasn’t just the championship hit Klay Thompson lost on Monday. As he was walking down the street saying hello to fans, he dropped one of his four rings on the ground. It landed near the fans and luckily none of them were looking for an opportunity because Klay quickly retrieved the ring.

13. Draymond Gets Some Ice Cream

We all get hungry when we party and with the hot weather at the time of the championship parade, it should come as no surprise to see Draymond Green get off the parade bus to order ice cream in a local shop. He walked up to the counter and said, “I just need some ice cream.”

Green received a lot of criticism for his play this series, but we all know his impact on the Warriors goes far beyond what the stat sheet says. He’s the defensive leader, the vocal leader, and one of the biggest personalities on the team – which is bound to come with some criticism.

12. Suns Out, Shirts Off for Gary Payton

Gary Payton II just finished his sixth season in the NBA and second with the Warriors. He has struggled to earn a consistent role on any one team, but he did that in Golden State this year. He had 7.1 points, 3.5 rebounds, and 1.4 steals per game in the regular season – all career highs.

And now, he’s a champion – something his father experienced as a member of the Miami Heat in 2006. It was Gary Payton II’s first trip to the playoffs and he elevated his play when it mattered most. In the Finals, he averaged 7.0 points, 3.2 rebounds, 1.4 assists, and 1.6 steals per game.

One of the best things about the championship parade are the hundreds of thousands of fans that show up to support their team – and that’s about how many the Warriors partied with on Monday. You can tell it was a packed house by this selfie video taken by Klay Thompson.

Earlier in the season, Steve Kerr made a promise to do the ‘Ted Lasso’ dance (from the hit Apple TV show) if his Warriors’ team were to win the NBA Finals. That promise came a while ago, but in the age of social media, people like to keep receipts – and that’s what Ted Lasso did.

On the championship parade bus, Kerr was reminded and pressured into doing the dance – or at least trying to. It didn’t turn out that well, but you have to give him props for trying. After all, he just won his fourth championship as a coach – which pairs well with his five rings as a player.

The Golden State Warriors won the championship on Thursday and their championship parade was on Monday. Knowing how hard champions like to party in the days following the win, it was only right to ask head coach Steve Kerr how his hangover was holding up after all the partying.

He responded as any 56-year-old would – noting it was a lot easier 30 years ago. He said it took a couple of days for the hangover to clear up, but he’s doing better now. He also mentioned how some of the younger players on the team had no problem with it – the perks of being young.

Juan Toscano-Anderson is a Mexican-American basketball player that just completed his third season in the NBA. He joined the Warriors’ G League team for the 2019-20 season and played 13 games with Golden State that season. He played 53 games in 2021 and 73 games in 2022.

It has been quite a year for JTA, becoming the first player of Mexican descent to compete in the Slam Dunk contest at this year’s All-Star break. He only played eight minutes in the NBA Finals, but he played a big role all year and it must’ve been nice waving that Mexican flag at the parade.

7. Klay Thompson Takes to the Streets

During a championship parade, it’s important for all the players and coaches to remain on the bus – mostly for player safety, especially considering the hundreds of thousands of people flooding the streets. Well, that didn’t stop some Warriors’ players from exploring the streets.

Klay Thompson was one of those players – Gary Payton II and Otto Porter were some of the others. The police officers were trying to get Klay back on the bus, but he went the opposite way and started to give some fans some love with the trophy – he eventually got back on the bus.

During the press conference after winning the chip, he mentioned how he needs to get some rest because it’s going to be ‘pool parties all summer.’ That’s when the ‘Poole Party’ headline popped and he doubled down on it by bringing pool toys with him to the championship parade.

5. Steph Has His Hands Full

Let’s not forget about his 31.2 points, 6.0 rebounds, 5.0 assists, and 2.0 steals per game in the NBA Finals. It was an incredible season that included a lot of hardware – seen in the photo above. All-Star MVP, Western Conference Finals MVP, Finals MVP, and a championship ring.

Klay Thompson was the man of the hour during the championship parade – being his usual, hilarious self with each moment that passed. That includes this one when Klay was walking through the streets, set his drink and trophy down, and gave us a Michael Jackson impression.

Thompson took the second-most three pointers on the Warriors’ squad during the NBA Finals. Of the 57 he put up, he knocked down 20 – good for 35% from long range. The 20 three-pointers he made are even more incredible when you figure he only made 36 shots total in the series.

3. Draymond Tells the Haters to ‘Shut Up’

We mentioned above how Draymond Green received a lot of criticism for his play this series, but he had an opportunity to respond several times during the championship parade on Monday. For example, he dropped multiple f-bombs on live television – saying ‘fu** em’ multiple times.

Then there was this moment, when Draymond said “winners win, that’s what we do.” The reporter asked him if there’s anything else he wanted to say, and Green said, “I said it all… Shut up” – telling the haters to keep their mouths shut. He’s a four-time champion now, so respect it!

With Stephen Curry’s performance this postseason, it’s clearer now more than ever that he’s one of the greatest of all-time. There has never been anyone like him and there will likely never be anyone like him ever again. And with a Finals MVP under his belt finally, he’s done it all.

That’s what makes this goat-in-a-curry-uniform so fitting for the moment. That’s right, someone brought an actual gote to the championship parade and dressed it in a Steph Curry jersey to signify what we can all agree on – Steph is the G.O.A.T, whether you like it or not – he is.

1. Who Cries On the Basketball Court?

As the final seconds of Game 6 ticked off the clock last Thursday, Stephen Curry started to break down on the quart. The cameras showed him as the tears started to fall – knowing he was now a four-time champion with a Finals MVP all-but-secured. It was a moment he’ll never forget.

It’s one Klay Thompson didn’t forget either, asking Curry at the championship parade, “Who cries on the basketball court?” Something tells me he’ll never live that one down, but it’s all good because he has a lot of hardware to get over it with. Now, it’s time to get ready for another run.

Where Will the Championship Parade Be Next Year?

The one thing that makes every new NBA season so exciting is you never know what you’re going to get. At the start of this past season, not many were on board with the Warriors winning it all. In fact, most of the teams we were focused on at the start of the year were a disappointment.

Now that the 2021-22 season has officially come to an end and the Warriors have had their championship parade, who do you think will hoist the Larry O’Brien Trophy next year? It might be difficult to answer right now, especially since Free Agency will play a large role in that answer.

YOU MAY ALSO LIKE: Jayson Tatum Discusses the Most Magical Part of Playing in the Finals

Some of the teams that will certainly be in position to win include the Boston Celtics, Golden State Warriors, Memphis Grizzlies, Miami Heat, Dallas Mavericks, Philadelphia 76ers, Milwaukee Bucks, Los Angeles Clippers, and Phoenix Suns. Keep an eye out for those teams!