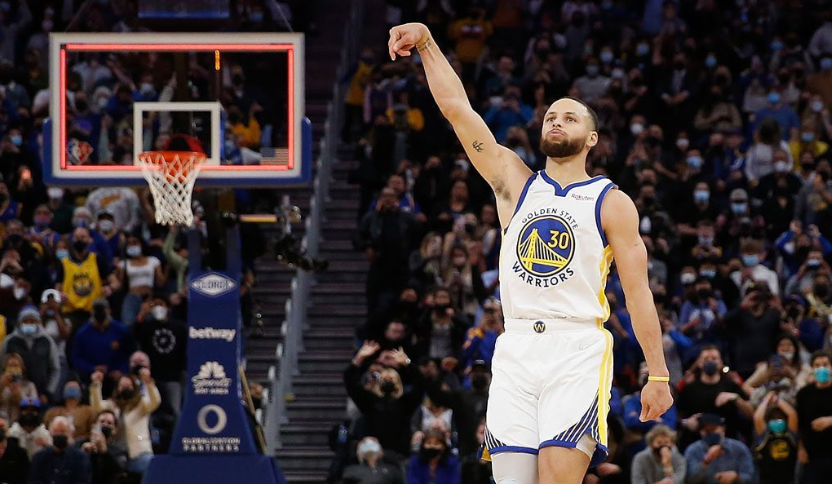 Steph Curry and the Warriors Are Looking Good in the NBA Playoffs: Here Are Some of Their All-Time Best Playoff Moments

Steph Curry and the Warriors have built a dynasty in Golden State – one that includes three championships in a four-year window and five-straight trips to the NBA Finals. It has been a match made in heaven since 2009, though many analysts had their doubts when it all began.

The Warriors selected Stephen Curry – out of Davidson College – with the seventh overall draft pick in the 2009 NBA Draft. Despite many people saying he was too small and skinny to find success in the NBA, Steph Curry and the Warriors have proven those critics more than wrong.

Best Playoff Moments From Steph Curry and the Warriors

Steph Curry and the Warriors have enjoyed countless special memories during the regular season, but some of their most exceptional moments have come in the playoffs. Curry is known to light it up in the playoffs, averaging 26.5 points, 5.4 rebounds, and 6.3 assists per game.

The Warriors were a 29-53 team when they drafted Steph Curry seventh overall. While they struggled to win consistently during his first three seasons, Steph Curry and the Warriors finally made the playoffs during the 2012-13 season. Two years later, they were in the NBA Finals.

That began a five-year run where they made it to the Finals every year – four of them against LeBron James and the Cleveland Cavaliers. With eight playoff appearances since 2012, let’s take a look at some of the best all-time playoff moments from Steph Curry and the Warriors.

We start with Game 1 of the 2013 Western Conference Semifinals against the San Antonio Spurs. The Warriors had just come off a first round series win against the Denver Nuggets and while they lost to the Spurs in Game 1, Steph Curry erupted for 44 points and 11 assists.

To date, it’s his second highest-scoring playoff game of his career. The Warriors fell 127-129 after giving up a three-pointer with one second left in the second overtime period. It was a tough loss, but an incredible game and the beginning of what would be an incredible playoffs career.

Next up is Game 3 of the 2014 Western Conference First Round against the Los Angeles Clippers. It was another loss for Steph Curry and the Warriors, but featured a playoff career-high 15 assists for the future Hall of Fame point guard. It was an incredible passing display by Curry.

Unfortunately, it was a rather rough night outside of the assists. He only scored 16 points off 5 of 12 shooting from the field, adding two rebounds and one steal in the process. Klay Thompson had himself a nice, 26-point performance and this was back when they had Jermaine O’Neal.

Moving on to the 2015 playoffs, which were legendary for Steph Curry and the Warriors in a variety of ways – starting with his two 40-point performances in back-to-back series. The two performances came within one month of each other and was the start of something special.

After scoring 40 points in the First Round and Conference Finals, Steph Curry had yet to surpass the 30-point mark through the first four games of the NBA Finals against the Cleveland Cavaliers – then Game 5 happened. With the series tied 2-2, Steph Curry erupted for 37 points.

It was a tight game at halftime – the Warriors held a one-point lead and Curry had 15 points. They started to pull ahead in the third quarter, but Curry went off for 17 points in the fourth quarter to bring the Warriors within one game of their first championship since 1975.

Speaking of the Warriors’ first championship since 1975, let’s talk about it. After the impressive second half two days prior, Steph Curry scored nine points in the first quarter of Game 6 of the 2015 NBA Finals against the Cleveland Cavaliers. Golden State held a hefty 13-point lead.

The Cavaliers came back in the second quarter, but the Warriors still held a two-point lead at the end of the first half. They outscored the Cavaliers by 10 points in the third quarter and went toe-for-toe with them in the fourth quarter en route to their first championship with Steph Curry.

The Warriors steamrolled their way through the First Round of the 2016 playoffs, but they did it without Stephen Curry on the floor – he played 20 minutes in Game 1 and 19 minutes in Game 4, but missed the rest of the series and the first three games of the next series due to injury.

Then Game 4 happened and Curry announced he was back. Despite coming off the bench, Curry played 36 minutes and put up 40 points, 9 rebounds, 8 assists, and five three-pointers made. It gave the Warriors a 3-1 series lead after losing Game 3 to the Portland Trail Blazers.

Stephen Curry isn’t the type of point guard that puts up triple-doubles often – especially in the playoffs – but he made an exception during Game 2 of the 2017 NBA Finals against the Cleveland Cavaliers. Curry finished with 32 points, 10 rebounds, and 11 assists in the win.

The Warriors held a six-point lead at the end of the first quarter, largely thanks to Steph Curry’s 15 points and two assists. Then Curry erupted with 12 points, 7 rebounds, and 5 assists in the third quarter, giving the Warriors a 14-point lead into the fourth quarter. The rest was history!

After Curry’s triple double in Game 2, the Warriors took a 3-0 series lead before losing Game 4 – bringing the series to 3-1. This brought back unwanted memories of the 2016 NBA Finals, which was when the Cleveland Cavaliers overcame a 3-1 series deficit to beat the Warriors for the title.

Heading into Game 5 of the 2017 NBA Finals against Cleveland, Steph Curry and the Warriors were destined to write a different story – and they did. Curry put up 34 points, 6 rebounds, and 10 assists in the win, helping Golden State secure their second championship in three years.

Fast forwarding to Game 2 of the 2018 NBA Finals against – you guessed it – the Cleveland Cavaliers, we witnessed Steph Curry break the record for most three-point field goals made in a single playoff game. He went 9 of 17 (53%) from long range en route to a 2-0 series lead.

Curry finished the game with 33 points, 7 rebounds, and 8 assists. He started the game 1 of 5 from long range, but went 3 for 4 in the second quarter. After a quiet 0-3 third quarter, Curry erupted and went 5 for 5 from long range in the fourth quarter, scoring 16 points in the quarter.

After an eight-point Warriors’ win in Game 3 of the 2018 NBA Finals, they looked to complete the series sweep in Game 4 – and that’s exactly what they did. Steph Curry put up an impressive 37 points, 6 rebounds, 4 assists, 3 blocks, and 3 steals – an unusually-stacked stat sheet.

The 2019 playoffs reminds us a lot of the 2015 playoffs with how dominant Curry was. We start with the very start of the playoffs – Game 1 of the Western Conference First Round against the Los Angeles Clippers. Curry had 38 points, 7 assists, and a playoff career-high 15 rebounds.

The Warriors went on to win that game 121-104 to take a 1-0 series lead over the Clips. After losing Game 2, they won Games 3, 4, and eventually Game 6 to advance to the next round. Curry also had a 10-rebound double-double (12 points) in Game 4 of this series, believe it or not.

Steph Curry and the Warriors fended off the Houston Rockets in the 2019 Semifinals in six games, which led to this incredible series between two of the game’s best shooters – Curry and Damian Lillard. And Game 1 of the 2019 Western Conference Finals didn’t disappoint at all.

Lillard certainly wasn’t himself (19 points), but Steph Curry erupted for 36 points and tied his record of nine made three-point field goals – he went 3 for 4 in the second quarter and 4 for 7 in the third quarter. A strong fourth quarter from Klay Thompson gave them the Game 1 victory.

We move on to Game 4 of the 2019 Western Conference Finals, a closeout game for Steph Curry and the Warriors. Heading into this game, Curry had at least 36 points in each game of the series. He was putting the Trail Blazers on blast and he had a 3-0 series lead to show for it.

We’re not done with the 2019 playoffs just yet. At this point, Curry already had a 15-rebound game against the Clippers, nine made three-point field goals against the Trail Blazers, and a triple-double against the Blazers. What are we missing? Oh yeah that’s right, a 40-point game.

It was Game 3 of the 2019 NBA Finals against the Toronto Raptors when Stephen Curry went off for a playoff career-high 47 points in a tough 109-123 loss. Curry didn’t have much help with Klay Thompson out due to injury. The Warriors would later lose the series in six games.

Our final playoff moment between Steph Curry and the Warriors happened recently – Game 4 of the 2022 Western Conference Semifinals against the Memphis Grizzlies. During this game, Steph Curry became the first player to make 500 career three-point field goals in the playoffs.

It came with 46 seconds left in the first half when Steph Curry hit an open three-pointer to cut the deficit to three points. Curry finished the game with 32 points, 5 rebounds, and 8 assists – including 18 points in the fourth quarter, which proved to be crucial to their Game 4 victory.

Will Steph Curry and the Warriors Win Another Title?

Steph Curry and the Warriors are back to their championship form as they close out the Dallas Mavericks in five games to make their sixth NBA Finals appearance in the past eight seasons – and their first since Kevin Durant left. It took two miserable seasons, but the Warriors are back.

With that said, do Steph Curry and the Warriors have what it takes to win it all? They’ll either have to get through the Miami Heat or Boston Celtics – both of whom are worthy opponents with exceptional defenses. Either way, the Warriors’ explosive offense will give them a good chance.

YOU MAY ALSO LIKE: 20 of the Craziest Sports Calls of All-Time

Steph Curry has already had seven 30-point performances during the 2022 NBA Playoffs and he’ll likely add on a few more in the NBA Finals. He has also had two double-doubles this postseason – both against the Dallas Mavericks. Stay tuned for more Steph Curry news!