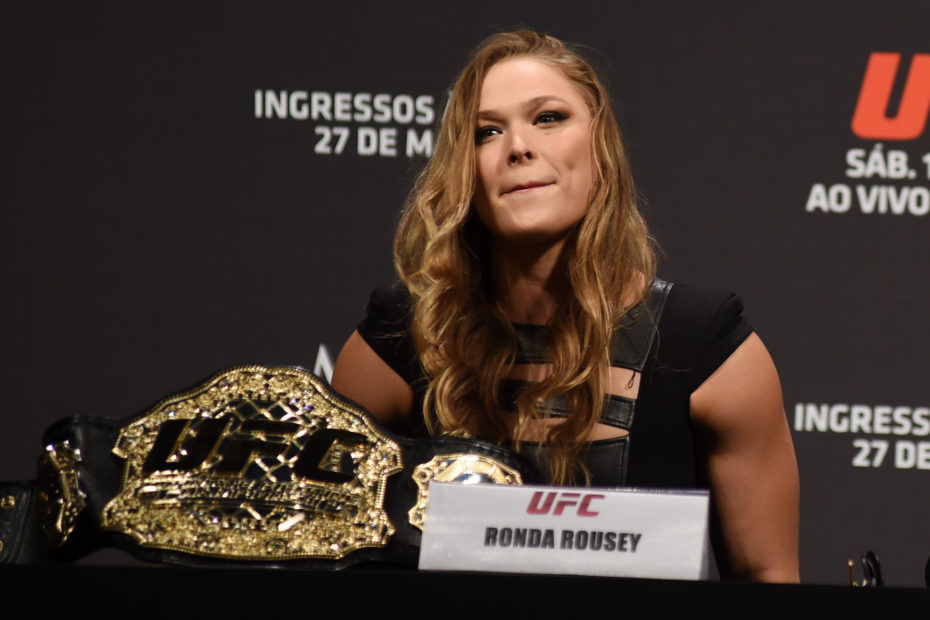 Women have only been fighting in the UFC since 2012, but the best UFC women fighters of all time made the most of the opportunities they were given – despite the sport being dominated by men for over two decades. They defied the odds and ushered in a generation of new fighters.

While the UFC got its start in 1993 and experienced massive growth through the early 2000s, it took Dana White quite a while to open up to the possibility of women fighting in the UFC. He finally folded when he signed Ronda Rousey in November 2012 and the rest is history.

RELATED: 20 of the Greatest Underdogs in Sports

Who Are the Best UFC Women Fighters of All-Time?

Since the signing of Ronda Rousey, women have risen to prominence in a promotion once dominated exclusively by men. While she was the first female star in UFC, she wasn’t the only female star and she doesn’t even rank at the top of the best UFC women fighters of all-time.

Over the past nine years, there have been a number of female MMA superstars that could be considered as the best UFC women fighters of all-time. They come from different backgrounds, different divisions, and different fighting styles, but they each finished their career as a legend.

Sarah Kaufman made her pro debut in 2007 in what was the first female fight in TKO 29 – Repercussion history. She was the bantamweight champion for Strikeforce and fought for Invicta FC before joining the UFC in 2013. She’s just 1-2 since with one ‘no contest.’

Cat Zingano, also known as ‘Alpha,’ made her pro debut in 2008 and spent time with Invicta FC and Strikeforce before her 2013 UFC debut. She beat Miesha Tate and Amanda Nunes before losing to Ronda Rousey and Julianna Pena. She’s just 1-4 since, but is still an all-time great.

Karolina Kowalkiewicz, also known as ‘Polish Princess,’ began her pro career in Poland and won her first seven fights before joining the UFC in 2015. She won her first three fights, including one vs. Rose Namajunas, but is just 2-7 since – losing to several all-time greats in that span.

Liz Carmouche, also known as ‘Girl-Rilla,’ started her MMA career in 2010 and spent time with Strikeforce and Invicta FC before making her debut against Ronda Rousey in the UFC’s first ever female fight. She’s just 7-7 since joining the UFC and currently fights in the Bellator MMA.

Tatiana Suarez made her MMA debut in 2014 and won her first three fights en route to the Gladiator Challenge championship. She then won The Ultimate Fighter 23 Finale before signing with the UFC in 2016. She has won her last four fights, including one against Carla Esparza.

Aspen Ladd went 8-1 as an amateur before making her professional MMA debut with Invicta FC in 2014. She went 5-0 before signing with the UFC in 2017 where she won her first three fights. She’s just 1-2 since, but her ability to finish should land her several more wins in the UFC.

Katlyn Chookagian, also known as ‘Blonde Fighter,’ made her pro debut in 2014 and won her first seven fights before her UFC debut in 2016. She went 6-2 before losing to Valentina Shevchenko for the UFC Women’s Flyweight Championship in 2020. She’s 3-1 since.

Tecia Torres, also known as ‘The Tiny Tornado,’ made her professional debut with Invicta FC in 2012, was featured in The Ultimate Fighter 20, and signed with the UFC in 2014. She won six of her first seven fights, but suffered four straight losses to other UFC greats. She’s 3-0 since.

Cláudia Gadelha, also known as ‘Claudinha,’ made her pro debut in 2008 and was with Invicta FC before signing with the UFC in 2013. While she has struggled to put together impressive win streaks, she has beaten the likes of Karolina Kowalkiewicz in 2017 and Carla Esparza in 2018.

Jennifer Maia started her career in boxing and went 3-0 before making her pro MMA debut in 2009. She was with Invicta FC from 2013-2018 and was the Flyweight Champion before signing with the UFC in 2018. She’s 4-3 since and all three losses came against women on this list.

Michelle Waterson, also known as ‘The Karate Hottie,’ made her professional debut in 2007 and didn’t sign with the UFC until 2015. She won her first two fights, lost her next two, and then went on a three-fight win streak. She’s just 1-3 since, but has a bout scheduled for March 2022.

Carla Esparza, also known as ‘Cookie Monster,’ was 3-0 before signing with Bellator MMA in 2010. She later became the first Strawweight Champion in Invicta FC and won The Ultimate Fighter 20. She lost four of her first eight UFC fights, but is 5-0 over the past two years.

Germaine de Randamie, also known as ‘The Iron Lady,’ is one of the best female kickboxers of all-time. She went 46-0 with 30 knockouts before pursuing an MMA career in 2008. She has won seven of her nine UFC fights and was the inaugural Women’s Featherweight Champion.

Weili Zhang, also known as ‘Magnum,’ made her pro debut in 2013 and while she lost the fight, she won her next 16 fights before signing with the UFC in 2018. She won her first three fights and was named UFC Strawweight Champion. She defended the title once, but is 0-2 since.

Holly Holm, also known as ‘The Preacher’s Daughter,’ was a successful boxer before starting her MMA career in 2011. She signed with the UFC in 2014 and won her first three fights en route to being named bantamweight champion. She’s just 4-5 since, but is still an all-time MMA great.

Jéssica Andrade, also known as ‘Bate Estaca,’ made her pro debut in 2011 and eventually signed with the UFC in 2013. She has 20 UFC fights to her name, winning 13 of them and being named Strawweight Champion in 2019. She has defeated six different females on this list.

Joanna Jędrzejczyk signed with the UFC in 2014 and won her first eight promotional fights. She was named Strawweight Champion in 2015, a title she defended five times, before suffering her first loss in 2017. While she’s just 2-4 since, she defeated six different females on this list.

Rose Namajunas, also known as ‘Thug,’ started martial arts training as a child and made her pro debut in 2013. She lost The Ultimate Fighter tournament finale in 2014, but is 9-2 since. She’s a two-time Strawweight Champion and defended the title twice in the past three years. She defeated five females on this list.

Ronda Rousey, also known as ‘Rowdy,’ started her career in judo and competed in the 2004 and 2008 Olympics before making her pro MMA debut in 2011. After becoming the first female signed to the UFC in 2012, she won her first six fights and defended her bantamweight title five times. She defeated four females on this list.

Cristiane Justino, also known as ‘Cris Cyborg,’ made her pro debut in 2005 and starred in Strikeforce and Invicta FC before signing with the UFC in 2015. She won her first five bouts and was named Featherweight Champion in 2017 – a title she defended twice. She won her final UFC fight in 2019 before joining Bellator MMA.

Amanda Nunes, also known as ‘Lioness,’ started martial arts training as a child and made her professional debut in 2008 before signing with the UFC in 2013. After going 2-1 in her first three fights, she has won her last 12 fights and has an opportunity to make it 13-straight on December 11, 2021.

Nunes is the only female two-division champion in UFC history. She has won seven straight title defense fights and defeated eight women on this list.

Greatest Female Fighters That Never Fought in the UFC

The best UFC women fighters of all-time played a major role in popularizing women’s MMA, but they aren’t the only women that helped propel the sport into prominence. In fact, there are a ton of women that contributed to the rise of women in MMA, despite never stepping foot in the UFC.

Those women deserve just as much praise for their efforts in the sport of MMA. If it weren’t for them, the best UFC women fighters of all-time would’ve never had an opportunity to showcase their talent on a global scale. Don’t worry, we’re going to highlight some of those women below.

YOU MAY ALSO LIKE: 20 Undefeated Boxers That Shocked the World