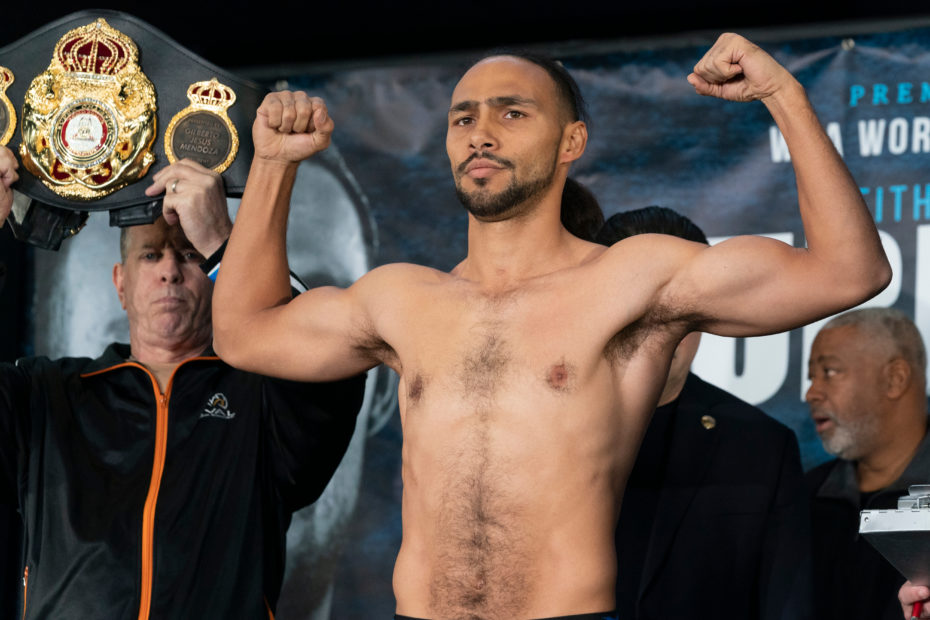 The welterweight division is home to some of the best pound-for-pound boxers in the world, but which welterweight boxers reign supreme in 2022? There are a number of boxers to consider at the top of the division and some of the names might surprise you as we welcome the new year.

2021 was an exciting one for the welterweight division, but it was also a little surreal as we saw two all-time great welterweight boxers retire from the sport – Manny Pacquiao (62-8-2) and Shawn Porter (31-4-1). The former retired as the only eight-division champion in boxing history.

RELATED: Sports Legends We Lost in 2021

Who Are the Best Welterweight Boxers in 2022?

With 2021 now in the history books, it’s time to look forward to what’s in store for 2022. There’s plenty of talent among welterweight boxers and we’ll see a lot of them square up against one another in the coming months. Prepare for what could be a turning point year for the division.

Although you won’t see Porter or Pacquiao in the ring this year, let’s take a look at some of the greatest and most dominant welterweight boxers in 2022. These are the fighters that everyone will want a piece of as they chase the WBC, WBO, WBA, IBF, and The Ring championships.

Kell Brook began his career in the welterweight division and was 36-0 at one point in his career. Between 2014-2017, he was one of the best welterweight boxers in the world as he defended his IBF welterweight title three times against Ionut Dan Ion, Frankie Gavin, and Kevin Bizier.

The only reason why Brook finds himself at No. 20 on this list is because he’s just 3-3-0 since, bringing his pro record to 39-3-0. The losses came against Gennadiy Golovkin, Errol Spence Jr., and Terence Crawford. Brook currently has a fight scheduled for February 19, 2022.

Mario Barrios turned professional in 2013 and amassed a 24-0 victory before contending for the vacant WBO world super lightweight title in 2019. He won that bout against Batyr Akhmedov by unanimous decision to earn his first belt as a pro. Akhmedov was 7-0-0 entering that fight.

Barrios defended his title for the first time against Ryan Karl one year later, winning by way of knockout to retain his title. His reign as champion would end in 2021 with a TKO loss to Gervonta Davis. Barrios hasn’t fought since and will make a return to the welterweight division.

Lewis Crocker had a 90-7 record as an amateur, fighting mostly in Northern Ireland and even winning a bronze medal at the 2011 European Schoolboy Championships in Grozny. He finally turned pro in 2017 and has been on fire ever since, winning each of his first 14 fights.

Crocker’s 12th victory came against Louis Green and it earned him the WBO European welterweight title. He has defended that title twice in 2021, defeating the likes of Deniz Ilbay and Artem Haroyan to retain the title both times. He’s currently No. 8 in the WBO welter rankings.

Thulani Mbenge turned professional in 2015 and has been lights out ever since, winning 18 of his first 19 pro fights. He had a 9-0 record before contending for the South African Welterweight title in April 2017, a bout where he defeated Shaun Ness by way of technical knockout.

Custio Clayton is a Canadian boxer that turned professional in 2014. He has been on fire ever since, winning 19 of his first 20 bouts. He had a perfect 18-0 record up until October 2020 when he finished with a draw against Sergey Lipinets for the interim IBF world welterweight title.

Known as ‘The Crippler,’ Cody Crowley has yet to lose as a professional boxer. With a 20-0 record since turning pro in 2014, Crowley has impressed many within the division and is currently shooting up the rankings – he’s ranked in the top-15 in The Ring, IBF, WBO, and WBC.

Crowley won the vacant Canada Professional Boxing Council National Super Welter Title in 2018 and has defended that title twice since – most recently in 2019. His most recent fight was against an undefeated Kudratillo Abdukakhorov, which he won by unanimous decision.

Sandor Martin shocked the world just a few months ago when he defeated four-division world champion Mikey Garcia in October 2021. The win was Martin’s first major win in the welterweight division and the 5’8’’ Spanish fighter has goals of being a world champion himself.

Martin has been consistent over his career, but most of his success has come in the super lightweight division. He has now won his past 10 fights and won the EBU European Super Lightweight title in 2019, which he has defended twice since. He’s a fighter to keep your eyes on.

Michael McKinson has been a mainstay in the welterweight division ever since he turned pro in 2014. He has won all 21 of his professional fights and has plans to continue that streak when he fights Vergil Ortiz Jr. in March 2022. It’s one of the most-anticipated fights coming in 2022.

Danny Garcia made his professional debut back in 2007 and has won 36 of his 39 fights ever since. That’s a lot of wins and very few losses, most of which came as a light welterweight and welterweight. He has already won world championships in both divisions, but he isn’t done yet.

Garcia won the WBC World Welterweight title in 2016, but couldn’t retain the title against Keith Thurman in 2017. It was Garcia’s first professional loss. He had another chance at the WBC world welter title against Shawn Porter in 2018 and Errol Spence Jr. in 2020, but lost both.

The son of two-division champion Nigel Benn, Conor Benn is starting to make a name for himself in the welterweight division. He made his debut as a 19-year-old in 2016 and has won all 20 of his pro fights ever since. By 2018, he had won the WBA Continental welterweight title.

Benn then won a fight against Josef Zahradnik before defending his WBA Continental welter title six consecutive times between June 2019 and December 2021 – three of which by TKO and one by KO. He ranks among the top-ten welterweights in IBF, WBO, WBA, and The Ring.

Radzhab Butaev, also known as ‘No Mercy,’ is a Russian boxer that made his professional debut in 2016. He has yet to lose a pro fight and has amassed a 14-0 record – 11 of those wins coming by way of knockout. He’s the current WBA Regular World welterweight champion.

Butaev originally contended for the WBA Regular World welter title in 2019 against Alexander Besputin. Although Butaev lost by unanimous decision, it was overturned to a no contest after Besputin failed a drug test. Butaev also won the WBC-NABF super-welterweight title in 2016.

Eimantas Stanionis is the pride of Lithuania, making his professional debut in 2017 after winning a gold medal at the 2015 European Championships and competing in the 2016 Summer Olympics – both in the welterweight division. Since turning pro, he has won all 13 of his fights.

Stanionis currently ranks 14th in WBC rankings, ninth in WBO, sixth in The Ring, and is the No. 1 contender for the WBA. He most recently fought Luis Callazo in August 2021, but it ended in a no contest after an accidental head clash. He’s due for a championship bout very soon.

In late-2015 and mid-2016, Avanesyan won the WBA Interim World Welterweight title twice. He then had a shot at the WBA World welter title in 2017, but lost to Lamont Peterson. He won the EBU European welter title in 2019 and has defended it four times since (most recently in 2021).

Jaron Ennis is ready for a breakout year in 2022. The former silver and gold medalist in the U.S. National Golden Gloves Championships made his pro debut in 2016 and has looked sharp ever since. With a 28-0-0 record and 26 knockouts, he’s due for a shot at a championship belt.

Ennis won the WBC-USNBC Silver welterweight title in 2018 after he improved to 21-0 in his career. He finally got his first major title shot in 2020 when he fought Chris van Heerden for the vacant IBO World Welterweight title, but it ended in a no contest after an accidental head clash.

Before that loss, Thurman was 29-0-0 and had defended his WBA title four times. He has one of the hardest punches among welterweight boxers, which has earned him the nickname ‘One Time.’ He has a fight scheduled for February 5th against Mario Barrios in the welter division.

Vergil Ortiz Jr. is an American professional boxer that currently ranks as the No. 1 contender in WBC and WBO, the No. 2 contender in WBA, the No. 4 contender in IBF, and the No. 5 contender in The Ring – all of which in the welterweight division. He’s due for a big fight soon.

Ortiz Jr. is currently 18-0-0 in his career and has finished every fight by way of knockout. He won the WBA Gold World welterweight title in 2019 and defended it twice before winning the WBO International welterweight title, which he most recently defended in a 2021 victory.

Yordenis Ugas is the current WBA Super World Welterweight Champion and the No. 3 contender to the vacant The Ring title among welterweight boxers. He originally held the WBA Regular World welterweight title before being promoted to Super champion in 2021.

The Cuban fighter has won four straight fights since his loss to Shawn Porter in 2019, which would’ve earned him the WBC World welterweight title. With wins against Abel Ramos in 2020 and Manny Pacquiao in 2021, Ugas is preparing for a big 2022 as he continues his WBA reign.

Terence Crawford isn’t just one of the best welterweight boxers right now, he’s one of the best pound-for-pound boxers period and one of the greatest of all-time. He is 38-0-0 with 29 knockouts in his career and has held multiple world championships in three different divisions.

Errol Spence Jr. is the king of the welterweight division right now. He’s the current unified IBF and WBC World Welterweight champion and No. 2 contender for the vacant The Ring welter title – behind Terence Crawford. Many are anticipating a showdown between the two in 2022.

Spence Jr. is currently 27-0-0 in his career with 21 knockouts. He has defended the IBF title five times and the WBC title once. Since 2017, he has defeated the likes of Kell Brook, Lamont Pearson, Carlos Ocampo, Mikey Garcia, Shawn Porter, and most recently Danny Garcia.

Who Are the Best Welterweight Boxers of All-Time?

Now that we’ve discussed who the best welterweight boxers are in 2022, let’s take a moment to appreciate some of the greats that came before them. After all, the division wouldn’t be what it is today without them. For example, Sugar Ray Robinson is the greatest welterweight of all-time.

YOU MAY ALSO LIKE: Arm Wrestling: Who’s the Best At It?