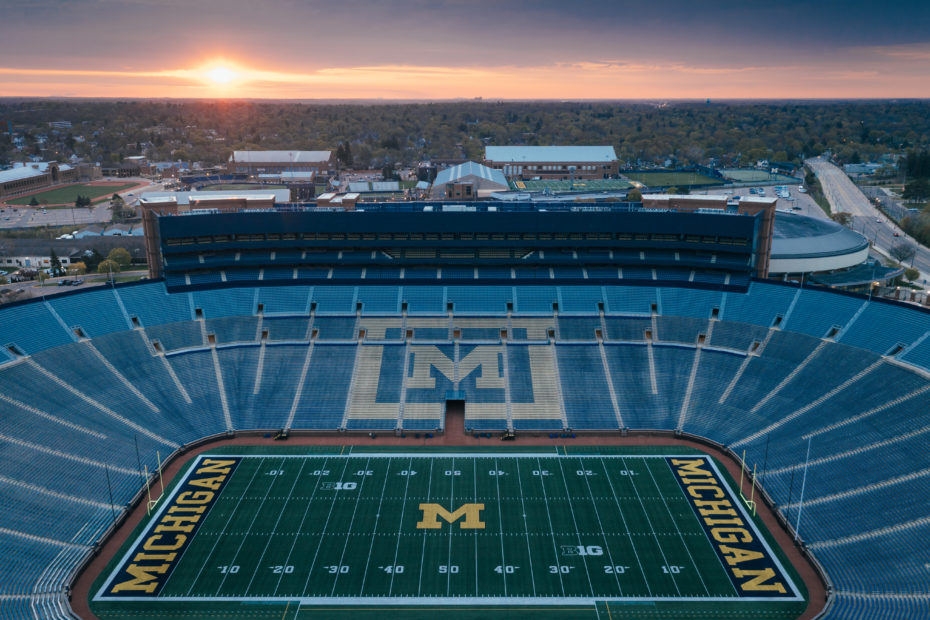 Did you know that the biggest college football stadiums in the country can seat more fans than an NFL stadium? It might surprise a lot of people, but there are real, practical, and logical reasons why – for example, college games are less expensive and usually draw a larger crowd.

If you fast forward 150+ years to 2022, college football has come a long way and so have the stadiums they play in. In fact, the eight biggest college football stadiums can each hold a capacity of at least 100,000 spectators. That’s 1,000 times the amount of spectators in 1869.

RELATED: We Rank the 25 Best Sports Stadiums of All-Time

What Are the Biggest College Football Stadiums?

The biggest college football stadiums are also some of the most historical and recognizable football stadiums in the world. A lot of them have been around for 80-100 years, though they’ve been renovated, updated, and modernized since then. Still, their charm and history lives on.

Other interesting things to note include the fact that Texas and Alabama are the only states with multiple stadiums in the top-15. Only five of them feature a turf field, while the other 10 utilize grass. And now for the moment you’ve been waiting for, let’s take a look at that coveted top-15.

Camp Randall Stadium is located in Madison, Wisconsin and is home to the Wisconsin Badgers (University of Wisconsin). The stadium was built in 1917 with a capacity of just under 12,000 spectators. Today, after numerous expansions and renovations, the capacity sits at 80,321 fans.

The stadium originally featured grass, but changed to AstroTurf in 1968 and FieldTurf in 2003. Two years later, the stadium welcomed a record 83,184 fans against Iowa. As the fifth-oldest college football stadium in the nation, there’s a lot of history inside Camp Randall Stadium.

Clemson Memorial Stadium is located in Clemson, South Carolina and is home to the Clemson Tigers (Clemson University). The actual playing field was named Frank Howard Field after a legendary Clemson coach, but many have dubbed the field ‘Death Valley’ through the years.

Memorial Stadium is located in Lincoln, Nebraska and is home to the Nebraska Cornhuskers of the University of Nebraska-Lincoln. The playing field was named Tom Osborne Field after a legendary head coach, but many people have dubbed it the ‘Sea of Red’ through the years.

The stadium was built in 1923 and holds a capacity of 85,458 spectators – it welcomed a record 91,585 fans in 2014. It features a TurfField and the student section is known as ‘The Boneyard.’ The architects behind the original design were John Latenser Sr. and Sons, and Davis & Wilson.

Jordan-Hare Stadium is located in Auburn, Alabama and is home to the Auburn Tigers of Auburn University. The playing field was named Pat Dye Field in honor of a legendary coach and athletic director at the school. The field features Tifway 419 Bermuda Grass, much like Clemson.

The stadium was originally built in 1939 and has a capacity of 87,451 fans. The architects behind the original design were Warren, Knight, and Davis. To many college football schools, Pat Dye Field is an intimidating place to play and is one of the best college gameday atmospheres.

Ben Hill Griffin Stadium is located in Gainesville, Florida and is home to the Florida Gators of the University of Florida. The playing field used to be named Florida Field, but they renamed it Steve Spurrier-Florida Field in honor of their legendary coach. The stadium officially opened in 1930.

Although it originally had a capacity of 21,769 fans, it can hold a whopping 88,548 fans today and welcomed a record 90,916 fans in 2015. The architect behind the original design was Rudolph Weaver. Many fans refer to the stadium as ‘The Swamp’ and it’s the largest stadium in Florida.

Rose Bowl Stadium is located in Pasadena, California and is home to the UCLA Bruins of the University of California, Los Angeles. It’s not just one of the most recognizable and historic stadiums in the world, but it was recognized as a National Historic Landmark in 1987.

The stadium opened in 1922 and has a capacity of 90,888 fans – though it welcomed a record 106,869 fans during the 1979 Rose Bowl game. It features a grass surface and the architect was Myron Hunt. The stadium has also hosted the World Cup Final and several Super Bowls.

Sanford Stadium is located in Athens, Georgia and is home to the Georgia Bulldogs of the University of Georgia. The playing field is named Dooley Field in honor of former head coach and athletic director Vince Dooley. Many fans refer to the stadium as ‘Between the Hedges.’

Bryant-Denny Stadium is located in Tuscaloosa, Alabama and is home to the Alabama Crimson Tide of the University of Alabama. It was originally named Denny Stadium after former school president George H. Denny, but they added coach Paul ‘Bear’ Bryant to the name in 1975.

The stadium was built in 1928 and has a capacity of 100,077 fans – it welcomed 101,821 fans on several different occasions. The playing surface used to be grass and while they switched to AstroTurf in 1968, they switched back to grass in 1991. It is perhaps the toughest place to win.

The stadium was built in 1924 and has a capacity of 100,119 fans – it welcomed a record 103,507 fans in 2018. The original architect behind the design was Herbert M. Greene. The playing surface features FieldTurf, though it used to feature natural grass and artificial turf.

Tiger Stadium is located in Baton Rouge, Louisiana and is home to the LSU Tigers of Louisiana State University. The stadium is often referred to as ‘The Bayou’ by fans and opponents. The playing surface features Celebration Bermuda Grass, similar to Tifton 419 Bermuda Grass.

The stadium was built in 1924 and has a capacity of 102,321 fans. It served as a temporary home field for the New Orleans Saints during Hurricane Katrina. The original architects of the stadium were Wogan and Bernard, with Trahan Architects spearheading the renovations.

Neyland Stadium is located in Knoxville, Tennessee and is home to the Tennessee Volunteers of the University of Tennessee. It was originally known as Shields-Watkins field, but the name was changed in 1963 to honor legendary head coach Robert Neyland, who had a 173-31-12.

The stadium is often referred to as the ‘Home of the 12th Man,’ since they refer to their students as the 12th Man. It was officially named ‘Kyle Field’ in 1956 in honor of E.J. Kyle, a former graduate and professor. It features an impressive 163 feet wide by 47 feet high scoreboard.

Ohio Stadium is located in Columbus, Ohio and is home to the Ohio State Buckeyes of Ohio State University. It has a variety of nicknames, including ‘The Shoe,’ ‘The Horseshoe,’ and ‘The House That Harley Built.’ It was added to the U.S. National Register of Historic Places in 1974.

The stadium broke ground in 1921 and opened the following year – the original architect was Howard Dwight Smith, a graduate of USU. It has a capacity of 102,780 fans, but welcomed a record 110,045 in 2016. It originally featured natural grass, but today features FieldTurf.

Beaver Stadium is located in University Park, Pennsylvania and is home to the Penn State Nittany Lions of Pennsylvania State University. The stadium is named after James A. Beaver, a former PA governor, president of Penn State’s board of trustees, and native of the town.

The stadium was built in 1960, which is much later than most of the biggest college football stadiums on this list. It has a capacity of 106,572 fans and welcomed a record 110,899 fans in 2018. Michael Baker Jr., Inc. was the original architect, but HOK Sport did the 2001 renovations.

Michigan Stadium is located in Ann Arbor, Michigan and is home to the Michigan Wolverines of the University of Michigan. Many fans and students refer to the stadium as ‘The Big House,’ largely due to it being the biggest college football stadium in the nation. It holds a lot of people.

The stadium was built in 1927 with 72,000 spectators, which was big compared to other stadiums of that era. Today, it holds a whopping 107,601 fans and welcomed a record 115,109 fans against Notre Dame in 2013. The architect behind this design was Bernard L. Green.

Comparing the Biggest College Football Stadiums to the NFL

As we learned from above, eight of the biggest college football stadiums have a capacity of more than 100,00 fans, but how many NFL stadiums can say the same? It might surprise you, but none. In fact, MetLife Stadium in New Jersey is the biggest with a capacity of 82,500.

There are three other NFL stadiums that have a capacity above 80,000. FedExField in Maryland holds 82,000, Lambeau Field in Wisconsin holds 81,444, and AT&T Stadium in Texas holds 80,000 spectators. Soldier Field in Chicago holds the least amount of people at 61,500 fans.

YOU MAY ALSO LIKE: 25 of the Best College Football Coaches of All-Time

There are a variety of reasons why college stadiums tend to be larger than NFL stadiums. For example, students are usually allowed in for free or at a discount, meaning college games bring in larger crowds. Since NFL teams want to sell their games out, they lower the capacity.