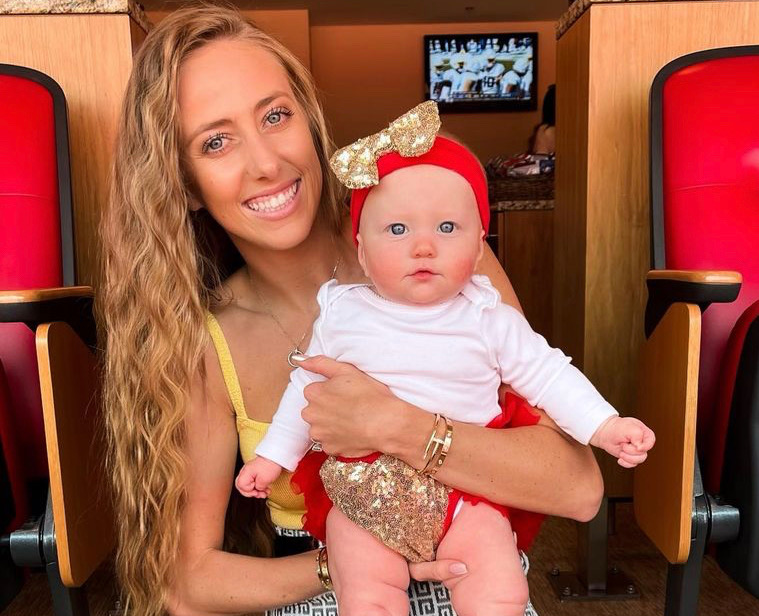 Brittany Matthews couldn’t be more excited to cheer on her fiancé, Kansas City Chiefs quarterback, Patrick Mahomes. Taking to Instagram to spread the love, Matthews posted a picture of her alongside the adorable 6-month-old product of Matthews/Mahomes couple, their daughter Sterling.

Both decked out head to toe in red and gold to represent the NFL star, the girls are pumped to be cheerleaders!

“Game Day #15 Girlssss❤️💛,” The 26-year-old mother wrote in the caption of her Instagram post, noting her partner’s iconic jersey number. She additionally posted a photograph of Sterling sporting Chiefs colors to her Instagram story and commented, “Hi everybody just here to cheer on my daddy @patrickmahomes.”

The support from his two girls must have aided Patrick Mahomes, as the Kansas City Chiefs ended up defeating the Cleveland Browns during their season opener game on Sunday. The final score of the intense game was a whopping 33-29.

Patrick Mahomes refers to Brittany Matthews as a ‘champion mom’!

The pair have been together for years, initially getting together in high school, and now they are happily engaged ever since September 2020. After the athlete popped the question to the former soccer player, they announced shortly after that the wedding was on hiatus once the couple was expecting a baby daughter.

“Sterling Skye Mahomes 👸🏼 2/20/21 6lbs 11oz,” Mahomes wrote on Instagram last February, announcing the birth of his daughter. Since the birth, the couple has limited their posts of the baby in order to protect her privacy. However, they recently felt it was time to share Sterling with the world.

Mahomes also sat down for an interview where PEOPLE reported the commentary he has made in regards to his fiancé and daughter. The quarterback shared, “Brittany has helped out a ton being a champion mom, and so it’s been a lot of fun and to be able to come home every single day and see her and how energized she is and how she’s changing and growing already. I’m just trying to tell her to slow down so I can enjoy every minute of it.”

He also included the fact that his role as a father has altered his perception of life. “I’ve grown a lot in my first few years in the NFL, and I’ve had to take on a lot of responsibility, but nothing’s like having a kid and having someone that you’re going every single day knowing that you’re trying to take care of,” Mahomes reported.

He then added the sentiments, “And to have her and Brittany and my family, I mean, it truly is an amazing feeling. To know I get to go to work every single day for something and then get to come home and enjoy the time I get with them.”