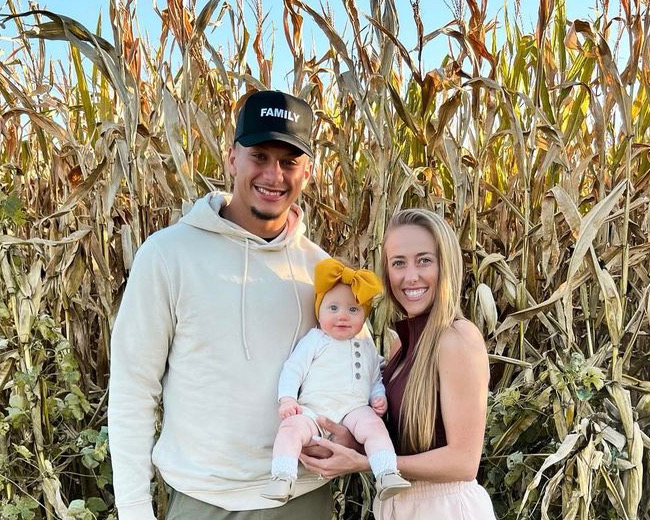 Brittany Matthews, 26, Is Tired of Being ‘Attacked’ Over Her Bold Celebration Tactics

Brittany Matthews, the fiancée of Kansas City Chief’s quarterback, recently expressed her frustration over those who have critiqued her on social media.

As she watched her man Patrick Homes proudly lead his team to victory over the divisional round game against the Buffalo Bills, the 26-year-old shared with her followers her celebratory ritual. In her Arrowhead Stadium suite, she whipped out a bottle of champagne and began pouring it over fans.

However, upon posting a video of the celebration, Matthews became the subject of backlash; backlash she feels is unjustified.

“I just wish I could do what I want without getting attacked every week,” she wrote on Twitter. In addition, Matthews re-posted a tweet that defended her actions. The Twitter user voiced, “People complaining about Brittany spraying champagne into the stands have clearly never won anything before. Just saying.”

However, pouring champagne was not the onmly way Matthews decided to celebrate her man’s big win. Aongside their adorable 11-month-old daughter, Brittany was celebrating Mahomes’ big win during an afterparty. Sporting matching yellow jackets and Kansas City Chiefs colors, the girls were happy to see the quarterback make it to the next round of playoffs in the AFC championship.

“This guy. You work your ass off for times like these,” the future Mrs. Mahomes wrote on her Instagram story, according to PEOPLE. “So so so very proud of you.”

Brittany Matthews and Patrick Mahomes cherich one another and it’s amazing!

Matthews celebrating her partner is not an uncommon practice, either. The couple, who got engaged in Arrowhead Stadium after Mahome received his Super Bowl Ring, have been together since high school and their bond is astonishingly adorable. A few months back during Matthews’ brithday, the Kanasas City Chiefs player relayed an incredible tribute to his fiancée.

“Happy birthday to my best friend, the best mom, and my future wife! Love you!” he wrote on Instagram. Of course, there was no way his partner in crime was going to read the message and not respond to his words of appreciation.

Crafting up a heartfelt response, Matthews relayed the sentiments, “My best friend, you made me feel so dang special! I love always! Thank you for everything you do for our family! You are my rock, so so so blessed to have you by my side.”

The Matthews-Mahomes wedding is expected to be sometime in 2022.