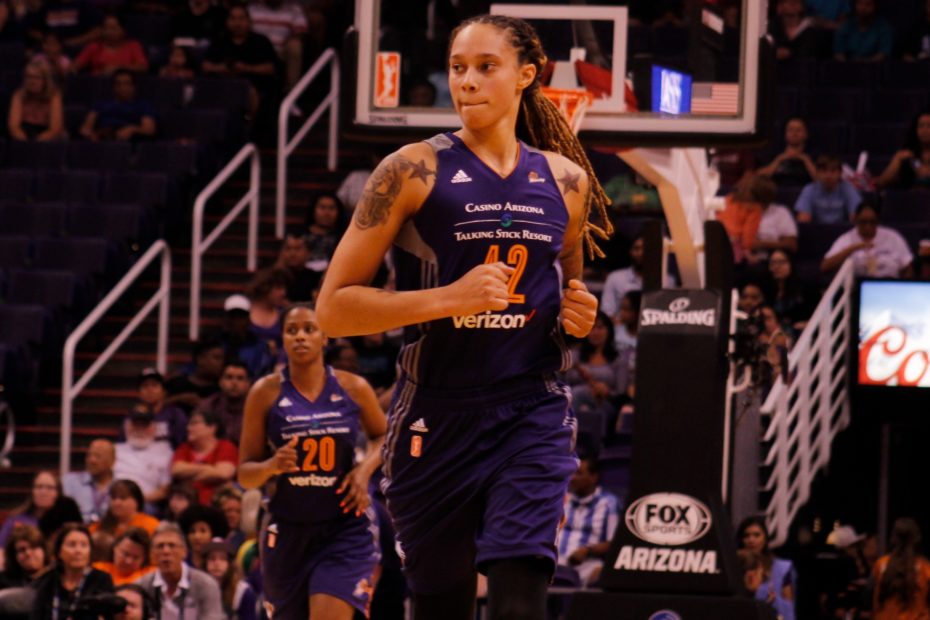 Brittney Griner’s Height and 20 Other WNBA Players Who Compare

Perhaps one of the most well-known WNBA players, many have wondered about Brittney Griner’s height – which is an impressive 6’9″ – upon seeing her play for the first time.

However, there is an abundance of tall players in the WNBA with superb skill, so we compiled a list of excellent WNBA players that compare to Britney Griner’s height.

Liz Cambage, who stands one inch below Brittney Griner and plays for the Las Vegas Aces, was a first round pick in the 2011 draft. The Dallas Wings drafted her, and she went on to play with the Dallas Wings before her position on the Aces, where she currently averages 14 PPG and has a great defensive record.

Her peak performance of her career so far was in 2018, during her time with the Dallas Wings, where she was averaging 23 points a game and had a 58% FG average for the season.

Kalani Brown, who is actually a free agent now, was waived by the Atlanta Dream this past summer after only logging 10 games and about an hour of playing time last season. Though she was a top draft pick in 2019, it seems like Brown hasn’t found a team that allows her to flex her abilities the way Baylor did during her college days. Having only averaged a few points per game, it’ll be interesting to see if she finds her way back into the league.

Amanda Zahui has been playing in the league since her draft in 2015 with the Tulsa Shock. After five years with the New York Liberty, she is now playing with the LA Sparks and having her best performance year so far.

It’s Charli Collier’s first year in the WNBA after a successful college career in Texas. She was the first overall pick and was drafted by the Dallas Wings in the 2021 draft and has had an underwhelming yet solid performance for a rookie this year, averaging about 3 points a game. Born in 1999, Collier is a young player and likely needs time to find her rhythm not only on her team but within the pro league, as we have seen with many great college players in both the NBA and WNBA.

Teaira McCowan is a 6’7” center for the Indiana Fever. She attended Mississippi State for college, and Brenham High School, where she was already drawing national attention. Her footwork and coordination improved tremendously during college, and this led to her achieving the third overall pick in the draft. She now has the two highest marks in Fever history for rebounds and made the All-Rookie team during her first year in the league.

Elena Delle Donne is one of the most decorated current WNBA players and has even written a book about her achievements and the difficulties she faced when reaching them. Also having performed on the USA team, Del Donne is a player that is likely to remain a strong force for a long time and will go down in history as one of the best posts to play the game.

Theresa Plaisance has been in the WNBA since 2014, and her performance has been slowly rising since then, raising her value as a player. She currently plays for the Washington Mystics.

A’ja Wilson is a player for the Las Vegas Aces and began playing with the team in 2018. She has consistently scored between 15 and 20 points per game since her entrance into the league following her college career in South Carolina. She was the first pick in the 2018 draft.

Born in 1998, JiSu Park, a South Korean basketball player who plays for the Las Vegas Aces. Standing at 6’5”, Park has remained with the Aces since her draft in 2018. She only scores about one basket a game consistently since she started playing in the WNBA, but being such a young player with great height, she still has time and room for improvement and further success in the league.

Born in 1996, Azura Stevens began her professional basketball career in 2018 when she was drafted as the 6th overall pick by the Dallas Wings. She currently plays for the Chicago Sky, whom she began playing within 2020. Averaging several baskets a game, there is still a long future for Stevens in basketball if she can maintain her skills and health.

Stefanie Dolson has played with the Chicago Sky for the past 8 seasons, having experienced more than one successful season with them. Before her time in Chicago, she played for the Washington Mystics. She has maintained a semi-stable record, scoring between 6 and 15 points throughout her career with both teams and always performing well in the defensive department.

Her yearly performance has been sporadic, and there doesn’t seem to be a correlation between team change and years of experience. Dolson also has experience on Team USA, which she considers the biggest honor of her career.

Bernadett Hatar is currently the tallest player in the WNBA, standing at 6’10”. She averages about 5 points per game right now, but being so early in her career (born in 1994, 2021 first year in the league), this statistic could easily rise a lot in the coming years. Right now, she plays with the Indiana Fever.

Sylvia Fowles is a WNBA veteran who has used her 6’6” height to her advantage for more than a decade. Drafted by the Chicago Sky in 2008 as the second overall pick, Fowles is still at the top of her game, averaging about 16 points a game.

With this past season being her brightest yet, Jones has found her sweet spot with the team that drafted her in 2016 – the Connecticut Sun. She averages about 20 points with the team, which is a few points more than her past years of performance. We can see this pattern in many instances; players thrive when they are bonded with a team and coach that are invested in them as a player and person. Likewise, the team has performed excellently in recent years.

Breanna Stewart is one of the biggest names in basketball right now, having been playing with the Seattle Storm since her draft in 2016. The Seattle Storm has been dominating the league for a while now, thanks for superstars like Sue Bird and Breanna Stweart, who score about 20 points a game. During her first year in the WNBA, she was already scoring 18 points a game. She is also a respected role model and social media influencer.

Tina Charles is a 6’4” center for the Connecticut Sun. She’s a WNBA veteran, having won over 8 victory titles with her teams since 2010. Despite having been in the game as long as she has, she is having the performance of her career, averaging over 20 points a game.

Mercedes Russell is a center for the Seattle Storm, where she has played since 2018 after bouncing between a couple of teams following her draft. She now averages a few buckets a game and is expected to remain with the Storm for the foreseeable future.

Candace Parker is a player for the Chicago Sky and is a WNBA vet, having been drafted as the first pick overall in the 2008 draft. She was drafted by the Sparks. Known for her versatility, Parker has proven to be more than a post and has averaged in the teens for her ppg percentage for the entirety of her career.

Astou Ndour-Fall, from Senegal, was drafted in 2014 by the San Antonio Stars. She now plays for the Chicago Sky, after taking a one-year break from the team with Dallas. She’s having a decent year, averaging about three baskets per game, which is almost equal to the best season of her career (two years ago in 2019, when she averaged nearly 7 points).

How do you compare to these basketball stars?