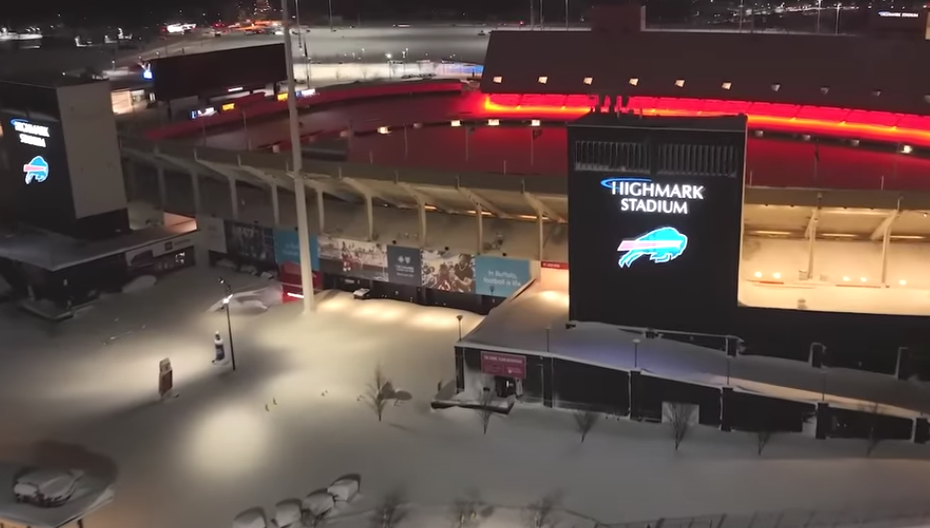 Most recently, it was the Buffalo Bills who fell victim to bad weather – having their Week 10 matchup against the Minnesota Vikings relocated due to heavy snowfall. Orchard Park, where the Bills’ stadium is and where the game was scheduled to be played, was hit with 77 inches of snow the night before.

Instead of playing a home game in Buffalo, the team was forced to play at Ford Field in Detroit – home of the Lions, who had an away game that week. Since Ford Field is an indoor stadium, weather wasn’t an issue and it resulted in a much more interesting game – the Vikings winning 33-30 in the final minutes.

Other Weather-Related Sports Moments We Will Never Forget

Leading up to their game against the Vikings, there were initial doubts as to whether the players would be able to get out of their house, to the airport, and on the team plane – most players were snowed in due to the 5+ feet of snowfall. With that said, they don’t call Buffalo the City of Good Neighbors for nothing.

Videos on social media showed Buffalo Bills’ fans – known as BillsMafia – coming to the players’ rescue as they brought out their shovels, plows, and snowblowers to help clear driveways so they could make it to the game. Some players were even escorted to the team bus by way of police-owned snowmobiles.

It was a community effort that made the Bills-Vikings game possible and while Buffalo wound up with a loss, it goes to show that sometimes it’s bigger than sports – bigger than wins and losses. With that said, let’s take a look at some of the other most notable and memorable weather-related sports moments.

One of the more recent ‘snow bowls’ in NFL history, the Buffalo Bills and Indianapolis Colts played in a white-out, snowglobe-like setting on December 10, 2017 in Buffalo, New York. The snow just kept coming, with some fans saying they couldn’t even see the scoreboard across the stadium. It was complete chaos.

Nonetheless, they played the game and the Bills wound up winning 13-7 in OT – a 25-yard rushing TD by LeSean McCoy is what won it. It was a run-heavy game, with the Bills rushing the ball 51 times and the Colts rushing it 46 times. McCoy led the way with 156 yards, while Frank Gore had 130 yards for Indy.

In order to play football, you have to be able to see what’s in front of you. Unfortunately, that wasn’t the case on December 31, 1988 when the Chicago Bears hosted the Philadelphia Eagles in a Divisional Round playoff game. During play, a thick cloud of fog formed over the field – hence the ‘Fog Bowl’ name.

Fans in the stadium couldn’t see what was happening on the field, people couldn’t see anything on the TV, and the players couldn’t even see a few yards in front of them. Despite the thick fog, referees allowed the game to continue and neither coach opposed it. The Bears ended up winning the game 20-12.

It was the 1989 World Series and the Oakland Athletics had a 2-0 series lead over the San Francisco Giants. The series was headed to San Fran for two games, with Game 3 scheduled to start on October 17th. Unfortunately, an earthquake put a stop to those plans just moments before the game started.

The Loma Prieta earthquake was measured at a 6.9 on the magnitude scale. It resulted in a loss of power and some damage to Candlestick Park, resulting in play being suspended for 10 days. The World Series resumed on October 27 and the A’s won Games 3 and 4 for their ninth and most recent World Series win.

In late August of 2005, Hurricane Katrina terrorized the city of New Orleans. As the events unfolded, more than 20,000 people took refuge in the Superdome – home of the New Orleans Saints. The stadium would end up suffering quite a bit of damage, which ultimately took about eight months to rebuild and renovate.

The stadium went unused by the Saints throughout the entire 2005 season – they played four of their home games at LSU, three in San Antonio, and one in New Jersey. The team made their return on September 25, 2006 – a 23-3 win against the Atlanta Falcons, starting the season with a 3-0 record.

The Bills-Colts Snow Bowl in 2017 wasn’t LeSean McCoy’s first rodeo. He was also a member of the Philadelphia Eagles when they played in their 2013 Snow Bowl against the Detroit Lions. More than six inches of snow fell DURING the game as players had a hard time seeing and/or holding onto the ball.

McCoy led the way for Philly, proving he might be one of the best Snow Bowl players of all-time. He carried the ball 29 times for an impressive 217 yards and two touchdowns. While the Eagles ended up winning 34-20, Joique Bell had a nice day for the Lions – finishing with 127 total yards and one TD.

We’ve already talked about snow, fog, and even an earthquake – now let’s talk about monsoons. It was September 25, 2011 when the Carolina Panthers hosted the Jacksonville Jaguars during Week 3 of the regular season. It was hot and muggy to start, but was downpouring by halftime – not a good combo.

In fact, it was raining so hard that fans watching the game on TV couldn’t see some of the plays due to the rain disrupting the view and lens. Players were practically playing in a big puddle. It wasn’t the greatest environment, but the Panthers won 16-10 thanks to a late touchdown in the fourth quarter.

For the second, third, fourth, and fifth days of the 2014 Australian Open, temperatures were as high as 106.8-110.0 °F. Usually, temperatures that high would result in the Australian Open extreme heat policy being enforced. In this case, it was only enforced for a few hours on the fifth day of the tournament.

It drew a lot of criticism after several ballboys, fans, and players were suffering from various heat-related illnesses during the tournament – including nine players withdrawing from the competition due to the extreme heat. Nonetheless, play continued with Stan Wawrinka winning the men’s and Li Na winning the women’s.

The 1967 NFL Championship Game was played on December 31, 1967 between the Green Bay Packers and Dallas Cowboys. It was exactly what you would expect out of a late-December game in Lambeau Field – cold, really cold. In fact, it was so cold that the championship game was dubbed ‘The Ice Bowl.’

They didn’t have to deal with snow or blizzard-like conditions, but it was -15 °F with a wind chill of -48 °F. The Packers gave up a 14-0 lead in the third quarter, but wound up winning 21-17 thanks to a last-minute touchdown by Bart Starr – a one-yard quarterback sneak. It’s one of the greatest NFL games of all-time.

The original snow bowl – also known as the snow bowl of all snow bowls. On November 25, 1950, the Ohio State Buckeyes hosted the Michigan Wolverines in what was a snowglobe-like setting. Making matters even more interesting was the rivalry between these two – one of the greatest rivalries of all-time.

There was a lot on the line in this game – the Big Ten Conference championship, for one. Michigan was also playing for a Rose Bowl berth, which they would secure with a 9-3 win over Ohio State. Only one TD was scored in the game as players struggled to navigate through the snowy, blizzard-like conditions.

On December 26, 1977, the Los Angeles Rams and Minnesota Vikings gathered for a Divisional Round playoff game. The game started off with some rain, but things grew worse as the game continued. The more players ran around and tore the grass up, the more the field turned into one big pile of mud.

On January 10, 1982, the Cincinnati Bengals were hosting the San Diego Chargers in the AFC Championship game. Little did they know they were preparing for what would be the coldest game in NFL history. While the air temperature was -9 °F, the wind chill factor was measured at a freezing -59 °F.

The Bengals must’ve been used to the cold weather because they had no problem with the Chargers in their 27-7 win. Ken Anderson threw for 161 yards and two touchdowns, while Pete Johnson added 80 yards and one touchdown on the ground. The Bengals lost to the 49ers in the Super Bowl.

Soccer players aren’t used to playing in the snow, but that’s what the United States and Costa Rica were dealt with on March 22, 2013 during a 2014 World Cup qualifying match in Commerce City, Colorado. Heavy snowfall was reported mere hours before the start of the game, but play wasn’t suspended.

Players reported it being difficult to see at times, but they managed to play on and finish the game. Clint Dempsey scored the game-winning goal just 16 minutes into the match – Costa Rica didn’t have an answer for it. Conditions grew worse as the game went on, especially as they got deep into the second half.

Most of the weather-related sports moments above made it difficult to play, but they managed to continue playing regardless. That wasn’t the case on January 10, 1953 when Newcastle United and Swansea Town met in the third round of the FA Cup. After just eight minutes of play, they abandoned the game.

They faced similar conditions as Eagles and Bears did in 1988 – a massive, thick cloud of fog that made it near-impossible to see what was in front of you. Nonetheless, the game was rescheduled for January 14 and Newcastle wound up winning 3-0 thanks to goals by Reg Davies, Vic Keeble, and Bobby Mitchell.

On January 17, 2007, the Orlando Pirates and Black Leopards of the DStv Premiership (South Africa’s top tier football league) were scheduled to play a match in Ellis Park Stadium. The game was originally delayed due to power failure inside the stadium, but that was just the start of a tragic day on the pitch.

Just a few minutes after the game finally started, a windstorm blew several advertising boards onto the field – hitting a linesman and several players, one of which was stretchered off the field. When they finally resumed play (again), they experienced a downpour that made it hard to see before the game was abandoned.

The final snow bowl and last of our weather-related sports moments takes us back to 2008 when the Green Bay Packers hosted the Seattle Seahawks for a Division Round playoff game at Lambeau Field. As you would expect from Green Bay weather, the snow started coming down and it didn’t stop.

It was the type of conditions that Brett Favre always wanted to play in and he finally got his opportunity. He threw for 173 yards and three touchdowns, while Ryan Grant rushed for 201 yards and three more touchdowns. The Packers won the game 42-20 before losing to the Giants in the NFC Championship.

What Are Your Most Memorable Weather-Related Sports Moments?

Looking back at what happened with the Buffalo Bills a few weeks ago, you have to wonder why some teams aren’t opting for indoor stadiums – especially ones with a retractable roof. It gives football teams the best of both worlds, allowing them to choose when they play indoors and when they play outdoors.

YOU MAY ALSO LIKE: All the Different Ways the Sports Community Has Showed Support for Hurricane Ian Relief Efforts

Nonetheless, the Bills are in the process of building a new stadium without a roof and while it’s designed to better protect against the harsh weather conditions Buffalo is used to, we can expect plenty more weather-related sports moments coming out of Buffalo in the near future – there’s no way around it.