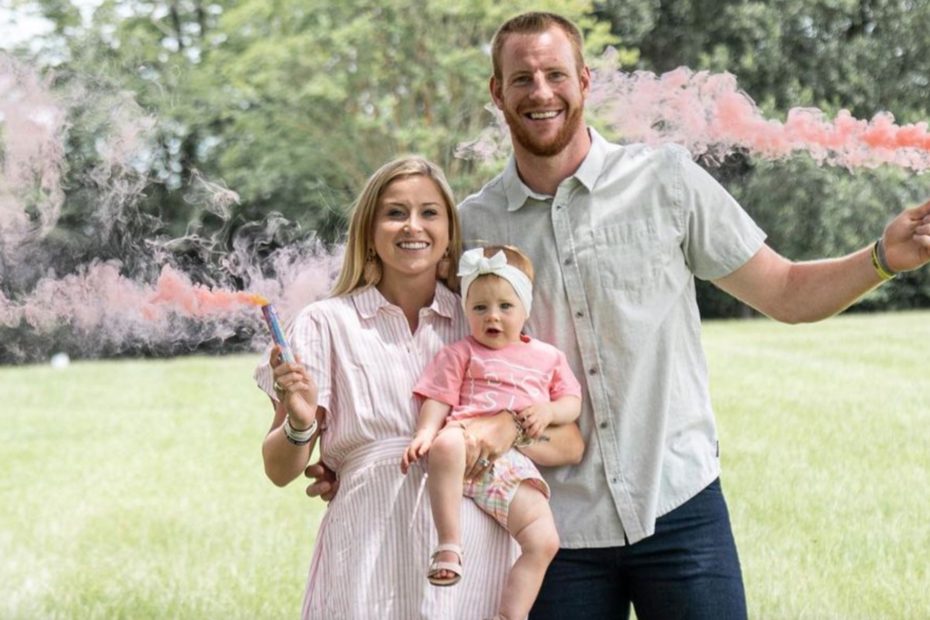 Carson Wentz Has an Exciting Announcement – His 2nd Daughter Is on the Way!

Indianapolis Colts quarterback, Carson Wentz, is expecting his second child with his partner, Madison Oberg, later this year. Initially announcing his wife’s pregnancy in June, the quarterback has just revealed the gender of his family’s newest addition: the Wentz family will soon have two little girls!

Taking to Instagram with the exciting news, the 28-year-old Colts player wrote in the caption of his post, “Another One. Girl Dad x2 comin’ soon! We think Hadley is excited to have a little sister.”

Hadley, of course, is the first child to come from the Oberg-Wentz duo. After marrying in 2018, the couple has just celebrated their three-year wedding anniversary. Within those exciting years of marriage, the couple announced the birth of their first daughter in April of 2020.

According to the NFL star’s Instagram, Hadley Jayne Wentz came into the world on April 27th, 2020. He wrote the following day, “Late late last night my beautiful wife and I were blessed to welcome our sweet little girl into the World!”

Since Hadley’s birth, the couple is yet to miss a post with their daughter on Halloween, Thanksgiving, and Christmas, so it is highly unlikely that the world won’t get to see their future daughter dressed in a festive getup alongside her mother, sister, and NFL father.

Exciting for this family, Hadley will soon become a big sister, and this couple could not be more pumped. When they first announced that they were expecting their second child, they had an incredible maternity photoshoot that emphasized Wentz’s background with the Colts.

Dressing the entire family in number two Colts jerseys, Hadley can be seen wearing a jersey that says “big sis”. On Instagram, the 28-year-old quarterback said, “Our fam is so excited and can’t wait to meet Hadley’s little sibling later this year.”

On Oberg’s birthday post, the Colts player even dedicated a portion of the caption to include something about their unborn daughter. Wentz said, “Happy Birthday to this amazing mama! Hadley and I think you are the COOLEST and I know that #2 will think the same! We love you!”

Although two little girls can certainly be a handful, this couple seems eager and prepared for their growing family. Congratulations to the Wentz family! The world cannot wait to meet their second daughter!