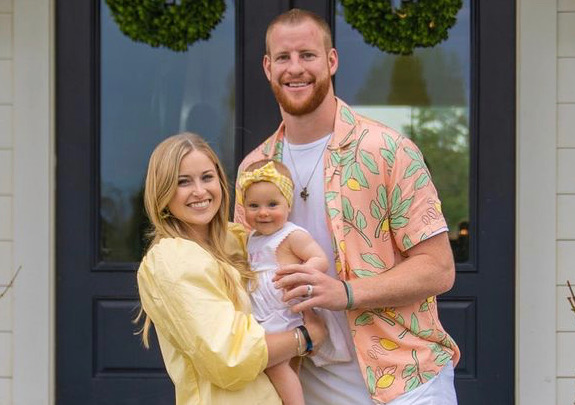 Carson Wentz Welcomes His 2nd Daughter Into the World!

Indianapolis Colts quarterback Carson Wentz was ecstatic to announce that his wife gave birth to their healthy baby girl on Tuesday, November 11th.

“Welcome to the World, my sweet Hudson Rose! What an incredible blessing you already are to our family,” the NFL star wrote in the caption of an Instagram post that announced the exciting news. He added, “Your Mama was an absolute champ. Can’t wait for you and your big sis to run the World— or at least my World.”

The introduction of baby Hudson also means that the couple’s first daughter, Hadley, is now an older sister. After welcoming Hudson Rose Wentz in at 7 pounds, 14 ounces, and 19.75 inches long, congratulations are definitely in order for the happy family!

Carson Wentz reveals he would have missed his wife going into labor for the Sunday Colts game.

Within this whole birthing experience, it has been made public knowledge that there isn’t anything the quarterback won’t do for the Indianapolis Colts. In fact, he was even willing to not witness his wife Madison giving birth to their secondborn.

As the couple was rapidly approaching the due date, he feared the delivery would land on game day, to which he said he was going to still play if that were the case.

“If it comes down to the game, I told my wife, ‘I’m playing, and then I’ll come see you at the hospital afterwards,’” Wentz said prior to the birth. He added, “She knew that. She’s been great. … I think God will time it up the way it’s supposed to be timed.”

Thankfully the delivery did not coincide with Sunday’s game, and Wentz continues to prove himself to be completely dedicated and devoted to his line of work and his family. So much so that even Colts defensive tackle DeForest Buckner acknowledged the hard work he shares with the team.

Buckner first noted that his wife would most likely let him do the same as Wentz’s wife, stating, “My wife would probably be telling me to go play.”

However, in a flattering string of words, the defensive tackle referred to Wentz with the sentiments, “It just shows the type of mentality that Carson has, it’s all about the team, he’s going to do whatever it takes to be out there Sunday.”