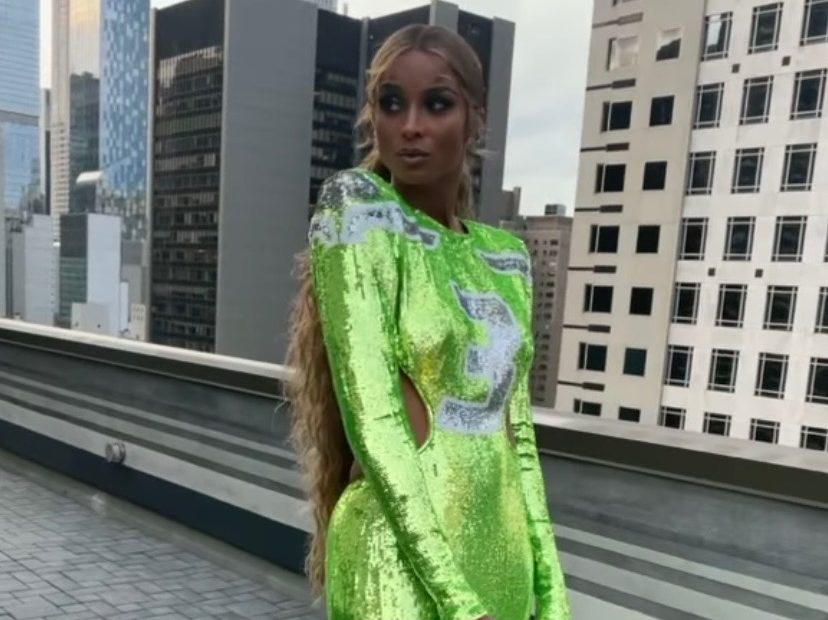 American singer and songwriter, Ciara, walked the red carpet dressed head to toe in a beautiful outfit that was inspired by her NFL husband. With an elegant neon-green dress that depicted typical jersey attire (such as the number 3 and grey highlights to mimic shoulder pads), the star used sparkles to show her love for Russell Wilson.

Ciara and Russell have been together since 2015 and decided to secretly tie the knot in 2016. Since their union, the couple has had three children together.

Ciara’s outfit choice for the Met Gala shouldn’t come as that big of a surprise, considering she is very vocal about her relationship with Wilson. When the Seahawks kicked off their Week 1 game, the singer took to Instagram to share a message for him, stating, “You inspire me daily. Your dedication, drive, and commitment to the game is unmatched. Cheering you on today and every day! I love you so much!”

This year’s Metropolitan Museum of Art’s Costume Institute Gala had the theme, In America: Lexicon of Fashion, and naturally Ciara chose the path that represented Wilson’s work with the Seahawks. The dress was designed by none other than Peter Dundas and was topped off with a bedazzled football clutch and Wilson’s Super Bowl ring.

“This is our third met together. He showed me [the] idea and I was like this is it,” Ciara stated in reference to her designer, according to PEOPLE. “Fashion is a big part of how I express myself when you look at old photos and be like, ‘What was I thinking?’ But we have to continuously express ourselves and challenge ourselves.”

RELATED: Alex Morgan’s Amazing Take on ‘Bring Your Child to Work Day’ Upon Returning to the 2021 NWSL Season

After witnessing the shocking showstopping dress Ciara had landed on, there was bound to be some conversation on it. Surprisingly, former Denver Broncos quarterback was among the people buzzing about the singer’s outfit choice. In fact, he even joked that the Super Bowl ring she was sporting was his, referencing his loss in the 2014 Super Bowl in which the Seattle Seahawks defeated the Denver Broncos.

“She’s rocking the jersey,” Wilson explained over a video call with the Manning brothers, Peyton and Eli. Peyton acknowledged Wilson’s wife’s outfit and went on to boldly claim, “She’s got a ring that I wanted. I didn’t get it.”

Then, Wilson went on to laugh and say similar things in reference to Tom Brady. “I have a ring that Tom has that I need to go get, too. But at least Eli stole a couple from him, so we’re good,” he commented.