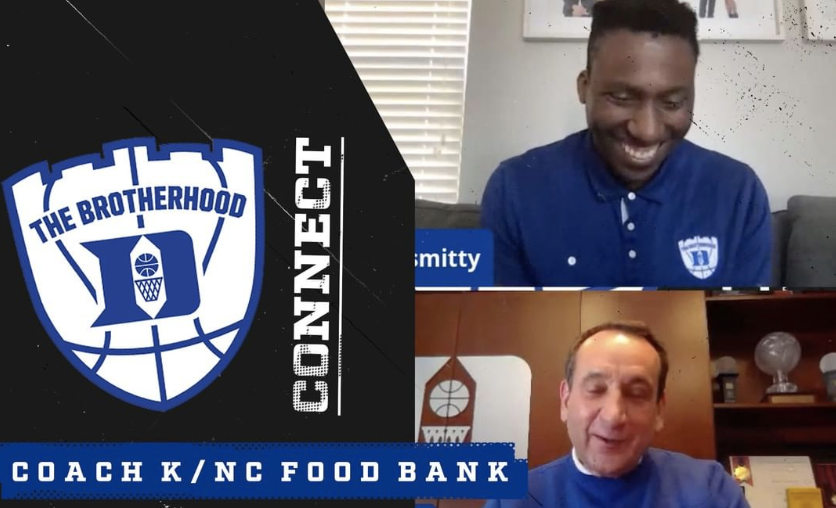 Duke basketball coach Mike Krzyzewski, popularly known as “Coach K,” and former Duke manager Kevin Marchetti, who is a co-founder of Lineage Logistics, have partnered to donate $225,000 to the Food Bank of Central and Eastern North Carolina.

On the Duke Facebook Live show, “The Brotherhood Connect,” Marcetti and Coach K announced the donation, giving their message directly to the Food Bank of Central and Eastern North Carolina’s director of marketing, Jennifer Caslin.

“Lineage is proud to partner with Duke University basketball and the Krzyzewski family to bring our combined resources and networks to bear to support our local communities and food banks, a critical part of our country’s food infrastructure,” said Marchetti during the live call.

“For years, Duke has been an important ally for Lineage, helping us to grow into the company we are today and sharing our deep commitment to improving the world’s access to nutrient-rich foods. Having known and worked for Coach K for many years, Lineage is proud to stand with him and the entire Duke basketball family to support the Durham community in this time of great need.”

4 million people have filed for unemployment last week alone, with the last five weeks now reporting 26 million unemployed workers total. As such, millions of Americans across the country are struggling to provide for their family, with lines at food banks extending for hours.

Coach K is often regarded as one of the best all-time college basketball coaches, garnering 5 NCAA National Championship titles, the second most in NCAA history. He has won 16 coaching awards through his prestigious career, in addition to coaching 23 Consensus All-Americans, the most recent being Vernon Carey Jr.