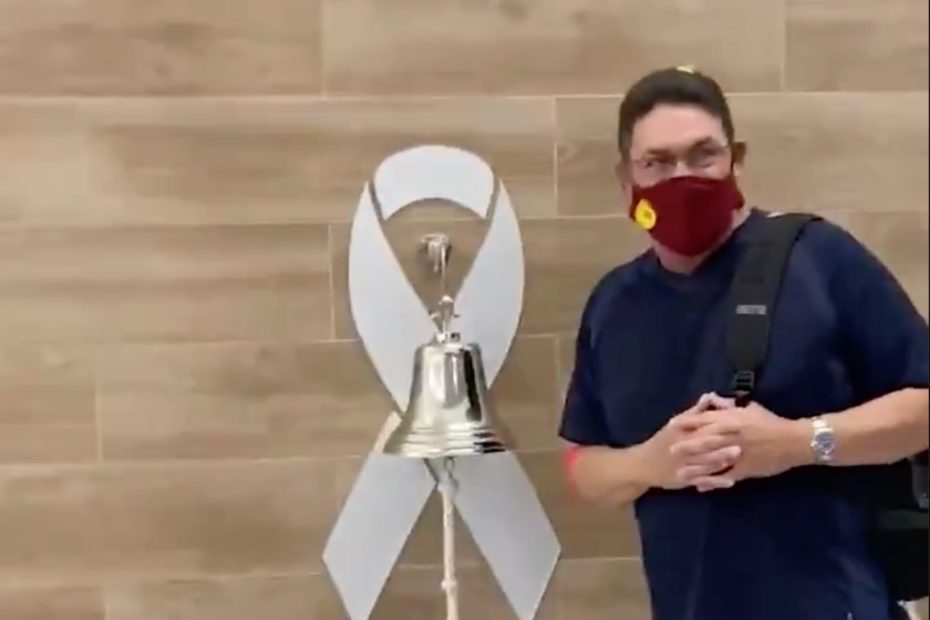 In what’s been a grueling year for so many in 2020, count Washington Football Coach Ron Rivera‘s as one who has endured many adversities. Suffering from a form of skin cancer, he kept up with the treatments all the while still coaching his football team.

After routing the Dallas Cowboys on Sunday at home, winning 25-3, Rivera was able to go home on Monday celebrating. As his team put it, it was “a different kind of Victory Monday,” ringing the bell at a local hospital after his final cancer treatment.

Hospital essential workers filled the hallway, setting up a post-game tunnel, or post-treatment tunnel if you will, cheering on Rivera as he made his way over to ring the bell.

This truly was a community effort, supporting Coach Rivera. From his wife and family to his team, fans, and hospital workers as Stephanie gave them all a shout out, calling them angels in scrubs.

“Such great people taking care of so many patients,” Stephanie said. “Feeling blessed for all the dedicated front line workers whose life work is to care for others! #angelsinscrubs.”

For the coach, he posted a “How it started. How it’s going!” post.

Congrats, Coach Ron! At The Buzzer joins everyone else in celebrating this victory with you. Throughout his battle, those around him have raised money and awareness around cancer. Here’s more on the NFL’s Crucial Catch initiative, aimed at fighting cancer through early detections and risk reduction.