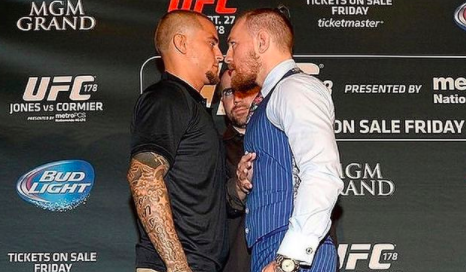 MMA fighter Conor McGregor is planning to fight Dustin Poirier in a rematch fight on January 23, 2021 according to The Mac Life.

RELATED: Seahawks Russell Wilson, Popstar Ciara Give Back to Education While Donating Nearly $2 Million to a Charter School

McGregor signed the contract on Thursday and all parties have agreed to terms per The Mac Life.

The bout’s “likely destination” is Abu Dhabi and both fighters will meet at the 155-pound weight.

“I am very grateful to be about to return and get to do what I love again,” McGregor said in an Instagram post before this official announcement. “I look forward to the fresh test Dustin will bring since our first bout, while also showcasing my own incredibly deep cache of weaponry. Whatever tool is needed on the night will be pulled from the duffel.”

McGregor also has reportedly pledged to make a donation to Poirer’s The Good Fight Foundation charity.

“I am also really excited about aiding Dustin(‘s) charity “The Good Fight Foundation”, which through the donation, will build a gym/premise for disadvantaged youth in his childhood hometown,” McGregor said. “I truly love this, and pledge to match the donation on a premise in my own childhood hometown! Both spots with an ode to the upcoming bout.”

The fight is announced just over five months since McGregor tweeted out that he was retiring. Guess McGregor couldn’t pass up on an opportunity to get back in the Octagon and come out of retirement for this rematch.