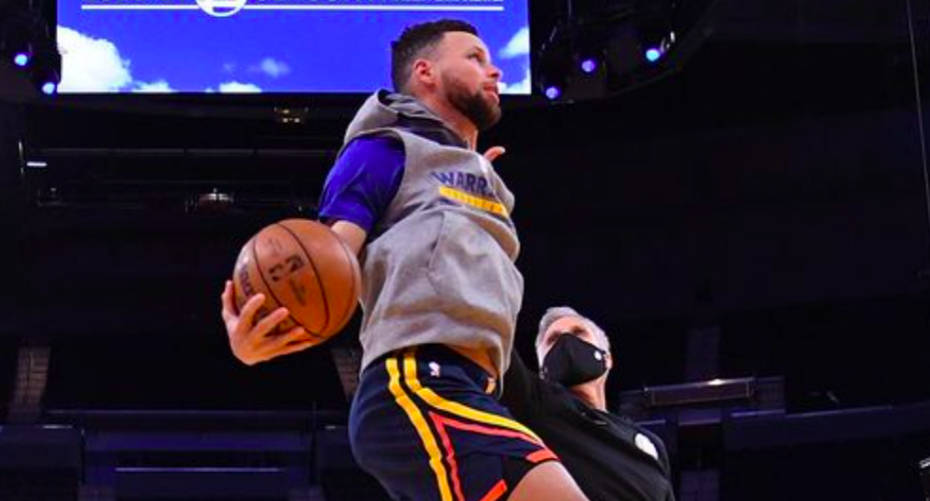 When you’re balling out like Steph Curry is, the light-hearted jokes and fun can abound on the court.

It’s what happened when the Warriors were in OKC, leading the game 125-81 with :32.5 left in just the third quarter:

“I told him he was going back in, and he didn’t understand the joke,” Kerr said according to ESPN’s Nick Friedell via ABC News. “He just wanted to run back onto the floor, that’s how hot he was.”

Per the AP via ESPN: “Curry scored 25 of his 42 points in the third quarter…Curry went 8 for 8 from the field and made all six of his 3-point attempts in the third quarter to post his high point total for a quarter this season. He was coming off a 53-point game against the Denver Nuggets on Monday that made him the franchise’s career scoring leader. He followed it by making 11 of 16 3-pointers and 14 of 20 shots overall.”

“I think the work that goes in behind the scenes of trying to get ready for every game, trying to get your body and your mind ready to play, coming off an injury like that has helped,” Curry said per ESPN via ABC News. “So never too high, never too low, but I feel really good right now.”

Curry’s teammate, fellow ‘splash bro’, Klay Thompson, holds the current record for most 3’s in a game with 14.

Steph was almost there and it was still the third quarter! Cue another joking, light-hearted moment with this ‘Dub Nation’ team.

“I was kind of joking with some of the guys tonight because I remember Chicago, and he did it in three quarters,” Curry said ‘of Thompson’s record 14 treys’ per ESPN’s Friedell via ABC News. “His 37-point quarter was even crazier, because I had 25 tonight and it just seemed like I was invincible out there; this dude had 12 more points in the same amount of time, so that was crazy in and of itself. And then the 14 3s. I had 11; I felt like I couldn’t miss. I think it’s gettable, but we’ll see.”

It’s crazy because, as you read previously, Curry had just set the record for being the Warriors all-time leading scorer! Yeah, that’s a feat within itself! But, this just goes to show Steph’s drive to be great. That you can break Chamberlain’s record but want to keep going, to break yet another record.

Oh, we’re not done yet! Here’s another record SC30 set (surprise, it has to do with the trey ball):

Kerr thinks highly of whom many consider one of the greatest NBA players ever, certainly one of the best shooters the game has ever seen.