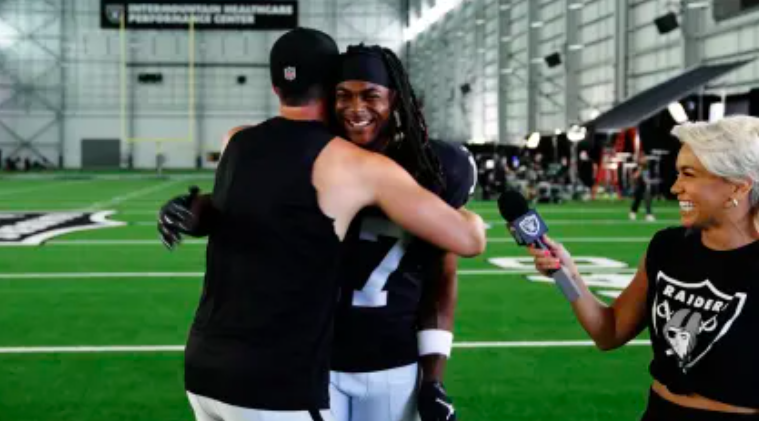 Did Davante Adams and Derek Carr REALLY Almost Die Together While They Were Teammates at Fresno State?

After Davante Adams and Derek Carr reunited via the Las Vegas Raiders, the five-time Pro Bowl wide receiver decided to share the story of the time he and Carr nearly died together.

Adams and Carr are no strangers to sharing a team together – they first did it in college when they both played for the Fresno State football team. In a story shared by ESPN, the Las Vegas Raiders wide receiver relayed a moment that solidified his bond with Carr: the time they almost died whitewater rafting.

“We almost died together. People don’t know that,” he said, referring to the time he went whitewater rafting with his quarterback.

Alongside the two Fresno State football players was tour guide Ryan Soares and Carr’s girlfriend/now-wife, Heather. The group took to the notoriously dangerous Upper Kings River in the southern Sierra Nevada. According to Soares, there was one rule about taking to the water: “Whatever you do, don’t stop paddling.”

Although the trip seemed to initially be “a lazy river,” the gears quickly switched when the group approached Banzai Hole. All of the sudden, the water was thrashing at the boat and getting more aggressive by the second. “That’s when their eyes got big,” Soares recalled.

However, what was perhaps more alarming than the Banzai Hole was the 75-foot rock face at the end of it. “If you fall out and end up having to swim, you’re not going to die,” Soares said of the location before adding, “Well, technically, you could.”

As the water continued to thrash, the one piece of advice Soares had was reiterated to Adams and Carr. Over the sounds of aggressive running water, the tour guide stated, “Hold on and don’t stop paddling! If you stop, you’ll flip the boat!”

Despite this piece of advice, Adams executed the one thing Soares told him not to. “I stop paddling as soon as we get through there because — literally — we were going down,” he relayed. Continuing the conversation, he added that his upbringing made him improperly fit to be a whitewater rafter. The NFL star said, “We don’t whitewater raft in East Palo Alto.”

Speaking of Adams and Carr, Soares added, “I had these two ripped, strong guys, and the moment I needed their power the most, they weren’t there.”

So, when they fell out of the raft, they quickly learned they needed their strength if they wanted to survive. Using all their might, the two football players paddled to safety. “After we cleared the boat, we had a talk on the shore, one more time, about how important it is to never stop paddling. From that point on, they were the best paddlers I ever had,” Soars commented.