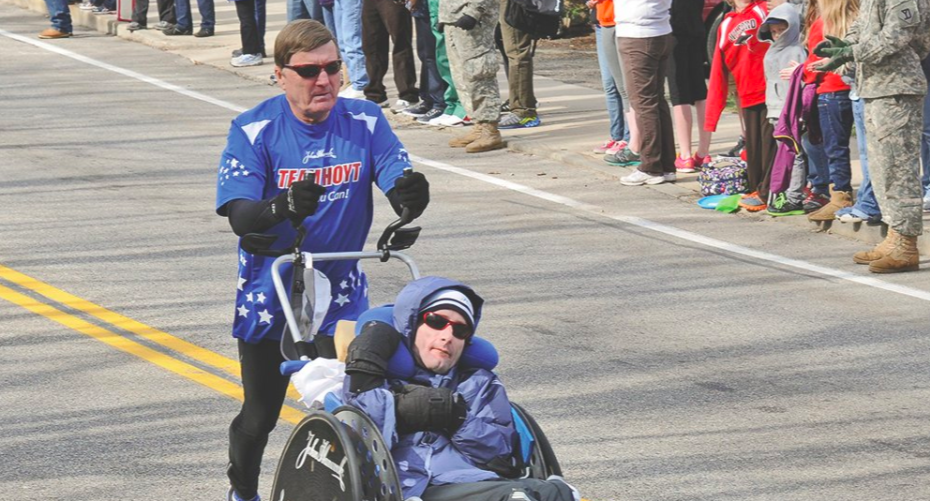 USA Triathlon Hall Of Fame Member Dick Hoyt Remembered, Honored By So Many People People Who Were Inspired By Decades Of Incredible Races With His Son

Some of the many wonderful things about sports is that it can inspire people and bring people together. In one triathlete’s case, it brought him and his son together for many bonding, quality moments in big-time races for more than four decades, inspiring countless people with their bond and determination.

According to Runner’s World: “After their first run together from Hopkinton, Massachusetts, to Boylston Street in Boston in 1980, the Hoyts became famous in the region and beyond for their athletic feats, and together they inspired people with disabilities and their families around the world”.

RELATED: Athlete Makes History By Becoming First Person With Down Syndrome To Complete An Ironman Race

Some tragic news recently happened regarding the father of this incredible father-son duo.

Runner’s World reports that “Dick Hoyt, who became famous at the Boston Marathon for pushing his son Rick in a wheelchair through the race 32 times, has died. He was 80. CBS Boston first broke the news of Hoyt’s death and reported he died in his sleep after experiencing recent health problems.”

According to Dick Hoyt’s obituary on Legacy.com, Hoyt: “Died at his home in Holland, Massachusetts of congestive heart failure…”

Per Runner’s World, after (reportedly their first race in 1977), Rick told his father, “Dad, when I’m running, it feels like I’m not handicapped.”

“Rick Hoyt was born a quadriplegic with cerebral palsy, unable to speak or walk. But when he was a boy, his parents had a computer developed for him that allowed him to communicate by tapping letters with his head. At 15, in 1977, he asked his father to help him participate in a benefit run for a classmate who had become paralyzed. Hoyt wasn’t a runner, but he ran the race with his son and both discovered a hobby that would become a passion. Hoyt trained while his son was in school by running with a bag of cement in the wheelchair, and they ran their first Boston Marathon in 1980.”

Hoyt’s legacy is being lived on and his life is being celebrated as people from all over were inspired by the type of father he was to his son and not letting any obstacle stop him from racing with his son.