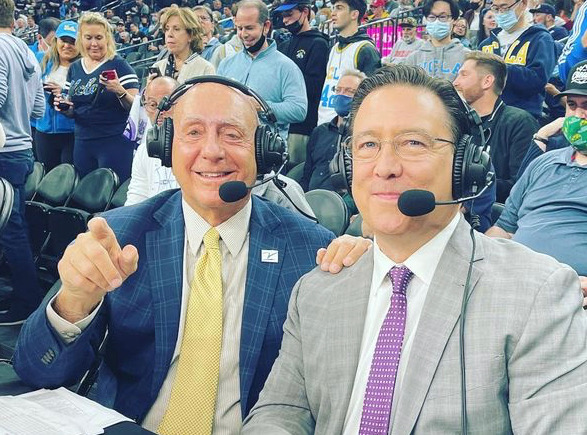 Dick Vitale, 82, Makes an Emotional Return to the Court After Cancer Diagnosis

Notable sports commentator, Dick Vitale, made his first appearance on ESPN since he was diagnosed with two types of cancer. Upon his return to the screen, the 82-year-old cried tears of joy.

In an intense battle between the top two college basketball teams in the country, Vitale was over the moon to be back on the sidelines after experiencing a battle with both melanoma and lymphoma. Sat alongside Vitale was Dave O’Brien, a fellow play-by-play announcer who seemed to lend all the support he could. When O’Brien introduced his colleague, tears were quickly shed.

“It’s great being here, Dave. I didn’t want to cry. I can’t believe I’m sitting here. This is really a big thrill for me,” Vitale said during the Gonzaga-UCLA game.

He went on to include the sentiments, “I want to thank all you people, sent me so many great messages. ESPN, Jimmy Pitaro, all my buddies at ESPN. I want to thank certainly, my family and all the fans. My, you’ve been unbelievable.”

The sports commentator initially won his battle with melanoma after he underwent surgery. However, in an unfortunate string of events, he was diagnosed with lymphoma in October. At first, the doctors were under the impression that he had bile duct cancer, which faces far more serious symptoms and a low survival rate. Thankfully, upon further testing, Vitale is now tackling an illness with a 90% survival rate.

As part of his treatment process for Lymphoma, Vitale is receiving steroids and 6-months of chemotherapy. With this treatment plan, the survival chances are high. The 82-year-old also discussed his battle while on the court, opening up the misdiagnosis that left him in fear.

He stated, “On October 12, I’ll be honest with you, when they walked in and told me I had cancer, they thought it was bile duct cancer, and it was really going to be a serious surgery and all, I never dreamt at 82 that I’m going to be at courtside again.”

He then proceeded to thank all the people who have supported him through the illness and was even fearful he was causing a scene due to his emotional state. “To be here again, I’m sorry, I hope I don’t cause a problem out there, but I feel so emotional,” he concluded.