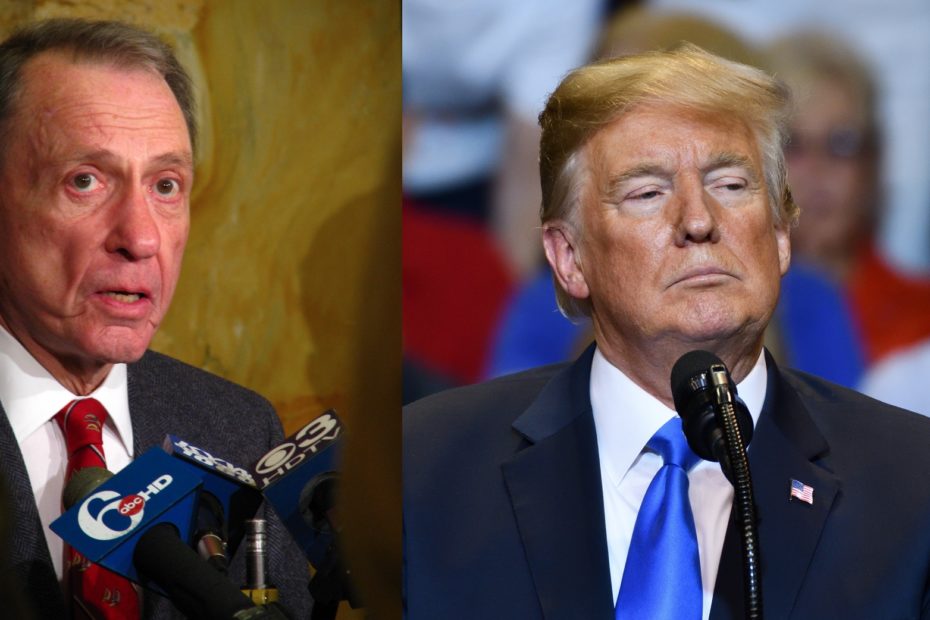 The son of the late United States Senator Arlen Specter and his ghostwriter have alleged that former President Donald Trump reportedly tried to stop his father from investigating the New England Patriots following the 2007 Spygate Scandal. According to ESPN, Trump allegedly tried to bribe Specter who launched an investigation into the scandal looking for more answers.

As ESPN reported, it was 2008 when Arlen Specter was determined to learn “how many games the New England Patriots’ illegal videotaping operation of opposing coaches’ signals had helped the team win.” He further hoped to learn through his investigation why “the NFL, under the orders of commissioner Roger Goodell, had destroyed all evidence of the cheating.”

YOU MAY LIKE: Bill Belichick Opens Up About Resigning From New York Jets In 2000

When his requests were “stonewalled” by the League and the Patriots, Specter sought out the help of a private investigator. And the idea of executives and coaches being forced to testify under oath sent the NFL into a panic, ESPN reported.

“If it ever got to an investigation,” Goodell reported said at one point, “it would be terrible for the league.” And the NFL attempted to dissuade the idea of a private investigation by issuing statement from the teams primarily affect by Spygate which suggested that “the league had done its due diligence.”

But when that didn’t work, a mutual friend of both Specter and Patriots owner Robert Kraft, reportedly believed he could make the investigation go away. And that’s when the mutual friend inserted himself into the problem.

“One day in early 2008, Specter had dinner with the man in Palm Beach at his palatial club, not far from Kraft’s Florida home. A phone call followed. The friend offered Specter what the senator felt was tantamount to a bribe: ‘If you laid off the Patriots, there’d be a lot of money in Palm Beach.‘”

Years later, in 2017, an ESPN reporter began to search for clues within Specter’s “letters, speeches, memos, notes and calendars” in an attempt to identify this “mutual friend” after the reporter had received a tip about who the friend might be. However, while a few clues were found, the reporter never found anything definitive in terms of the friend’s identity.

According to the tip, the friend had “just launched an outside and underdog campaign for president. The reporter even talked with close friends and confidants of Specter, who had passed away in 2012, following a battle with non-Hodgkin lymphoma. Still, nothing, ESPN reported.

Until recently. According to ESPN, follow-up conversations with those closest to Spector, including his oldest son, Shanin Specter, and the ghostwriter of Specter’s two memoirs, Charles Robbins, revealed that the identity of the man who allegedly offered Specter a lot of money to drop the private investigation into Spygate was none other than former President Donald J. Trump.

Shanin and Robbins also told the reporter that “Trump had told Specter he was acting on behalf of Robert Kraft,” ESPN reported.

According to Robbins, he learned of the alleged exchange between Trump and Specter almost by accident in 2010, ESPN reported. He was preparing to write Specter’s third memoir, which had begun just six weeks after Specter switched from a Republican Senator to a Democratic Senator. A race he lost to Congressman Joe Sestak.

During that recorded conversation between Robbins and Specter, Specter talked about America’s addiction to the NFL and also Spygate. Specter wondered if the Patriots also cheated in 2005, when they beat his beloved Eagles in Super Bowl XXXIX.

He also told Robbins that he and Kraft had a delightful conversation about his call for an investigation and also the mutual friend who had tried to “bribe” him. The transcript reveals that Specter brought up the situation to Kraft during their meeting. According to ESPN, he told Kraft:

“On the signal stealing, a mutual friend had told me that ‘if I laid off the Patriots, there’d be a lot of money in Palm Beach.’ And I replied, ‘I couldn’t care less.'”

Robbins told the ESPN reporter that he “asked Specter [who the friend was], and he said, ‘It doesn’t matter, let’s move on,’ and I didn’t press it.”

“Robbins added that it had bothered him that Specter didn’t trust him with the name. But in the end, it didn’t really matter, Robbins now says: ‘I was pretty darn sure the offer was made by Trump. At the time, it didn’t seem like such an important moment. Back then, Trump was a real-estate hustler and a TV personality.'”

After Robbin’s appeared quite convinced that the friend was Trump and said so on record, the reporter reached out to Shanin Spector again. This is was Shanin told the reporter:

[My father] was pissed. He told me about the call in the wake of the conversation and his anger about it. … My father was upset when [such overtures] would happen because he felt as if it were tantamount to a bribe solicitation, though the case law on this subject says it isn’t. … He would tell me these things when they occurred. We were very close.”

Now, both Trump and Kraft have responded to the report. According to Jason Miller, a senior adviser to Trump, “This is completely false. We have no idea what you’re talking about.”

ESPN reported that Miller declined to answer a series of follow-up questions while a Patriots spokesman said Kraft “never asked Donald Trump to talk to Arlen Specter on his behalf.”

The email from the spokesperson to ESPN continued to say, “Mr. Kraft is not aware of any involvement of Trump on this topic and he did not have any other engagement with Specter or his staff.”