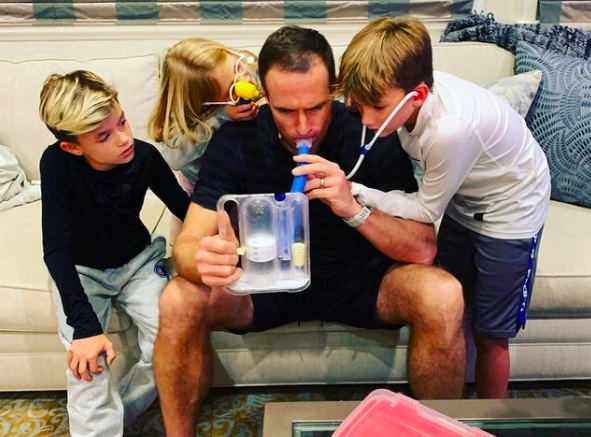 ‘Will Be Back In No Time’: Drew Brees Makes Light Of Collapsed Lung And Fractured Rib Injury

‘Will Be Back In No Time’: Drew Brees Makes Light Of Collapsed Lung And Fractured Rib Injury

Saints fans, don’t worry. Yes, your starting quarterback Drew Brees may have a collapsed lung and multiple rib fractures according to ESPN reporter Ed Werder. But, he’s staying positive and says he’ll be back in no time.

RELATED: Drew Brees Says He Is ‘Sick’ Over How His Remarks Regarding Kneeling in the NFL Amidst the Social Injustice America Is Facing Right Now Were Perceived

“Who Dat Nation: I’ve got the best medical team in the world…will be back in no time!” Brees posted on Instagram with his family.

Of course, Brees made light of the situation calling his family the best medical team in the world helping him out. Good to see that Brees is at least in good spirits as he recovers from injuries reportedly suffered over the last two weeks per ESPN.

And when it comes to Brees playing through injuries, just take a look at this:

As NOLA News’ sports digital producer Jeff Nowak points out in the Tweet: “With 5 cracked ribs and a collapsed lung, Brees finds a way to to complete 6-of-7 throws for 57 yards (most of it by Kamara) and a TD.”

WhoDatDish contributor Michael Balko adds: “Drew Brees threw a TD pass with a collapsed lung. Don’t ever question the heart and toughness of that man.”

“Wednesday is our first day that we’re required to [report injuries],” Payton said per ESPN. “And to be fair to the process, let’s stick with that…None of it benefits us by announcing that player earlier than later (who would replace Brees at quarterback). I wouldn’t project or answer that in any way. We’ll see how this week unfolds.”

Who’s Left On The Depth Chart?

James Winston. Whom you know from Florida State and the Tampa Bay Bucs being the starting quarterback at both of those stops.

Taysom Hill. Whom you know as the utility guy on offense, lining up at receiver, sometimes quarterback, sometimes running the ball.

We wish Brees a speedy and healthy recovery. In the meantime, we’ll see who Payton announces as the Saints starting quarterback until Brees is ready to take the field.