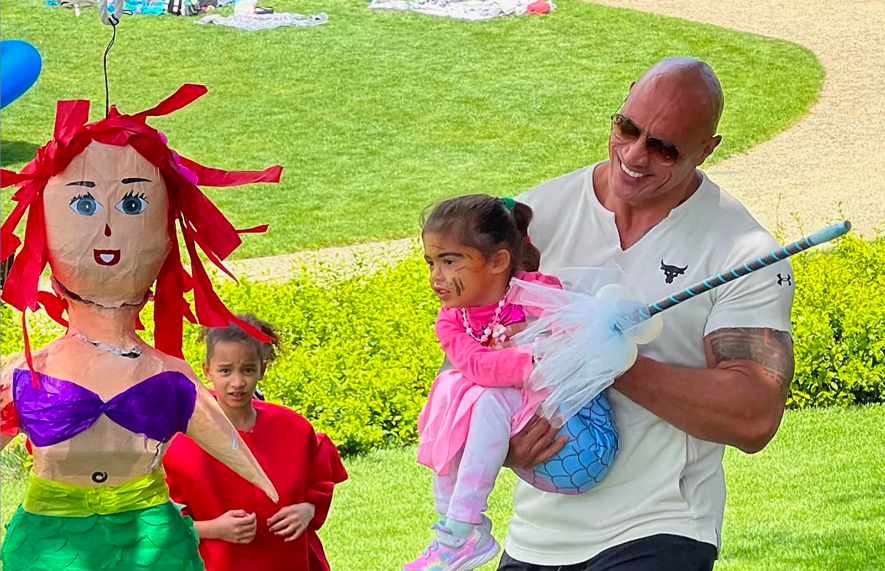 While his eldest daughter prepares for her professional wrestling career, Dwayne “The Rock” Johnson has been educating his youngest children about his experience in the ring.

The 50-year-old former WWE star recently sat down on Jimmy Kimmel Live! and told host Kerry Washington that his youngest daughters have a newfound affinity for his wrestling career. “They love seeing me, ’cause it’s almost like it’s a different lifetime,” he explained. “So they’re fascinated when they see me in old matches.”

Prior to his acting career, Johnson spent 8 years as a professional wrestler. As the son of WWE Hall of Famer Rocky Johnson, Dwayne “The Rock” was practically destined to do great things in the ring. In fact, within months of pursuing a career with WWE, he won the Intercontinental Championship, which is one of the organization’s most promising competitions.

He quickly rose to stardom in the world of entertainment and his legacy in the ring never dwindled. Even after picking up roles in various films and reinventing himself as an actor, he is still considered one of the best wrestlers of all time.

Given Johnson’s charisma in the ring, it is no surprise that daughters Tiana Gia, 4, and Jasmine, 6 — whom he shares with wife Lauren Hashian — have become obsessed with his previous passion. The actor even shared that after his daughters viewed his old wrestling clips, they now “love jumping off couches on me.”

Dwayne Johnson is joyous over his three daughters

Although it is too soon to determine whether or not the youngins will follow in their father’s footsteps, it would not be surprising if they also went on to try their hand at wrestling. Considering Johnson’s eldest daughter Simone recently made her WWE debut, the knack for scuffling in the ring just might run in the family.

“She made her debut in WWE in their smaller federation, NXT,” the father of three said of his eldest, glowing with pride. “She did so good. She went out there on the microphone, you’ve got to be poised when you go out there, and she’s got a cool wrestling name … Ava Raine.”

Despite his career change, the wrestler-turned-actor has been adamant that his job as a father has been the most rewarding. On Father’s Day, he took to Instagram and expressed that being a dad is his “most important” and “favorite” job of all time.

“We got the best job in the world leading by example and raising our babies,” he wrote in the caption, celebrating the gift of fatherhood.