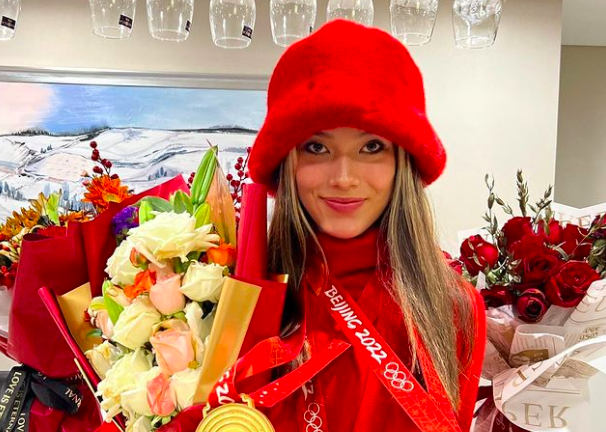 The 18-year-old dominated the women’s freestyle skiing halfpipe event, her first run; scoring a 93.25 and an improved 95.25 during her second run. Given her credentials, she accepted a gold medal during this event. In addition, she earned a gold medal in the big air event and a silver medal for the slopestyle.

Incredibly, the 2022 Beijing Games mark the first time a teenager has won three medals for action-sports events at the same Olympics.

“It’s been really difficult, honestly,” Gu admitted to NBC after completing the three competitions. She went on to elaborate and explained, “I’ve been training, competing, quali[fications], finals, every single day from Opening Ceremonies ’til now. I’m the only person who made finals in all three events. I heard somewhere that I was the first action-sports athlete to podium at three events at the same Olympics? It is mind-blowing, I’m honestly very exhausted.”

As a child born to Chinese parents, she is proud to represent America as a citizen with a Chinese heritage. In fact, Gu cited the Olympics as an excellent opportunity to spread the message of inclusion and diversity.

“Through skiing, I hope to unite people, promote common understanding, create communication, and forge friendships between nations,” Gu continued. “If I can help to inspire one young girl to break a boundary, my wishes will have come true.”

For Gu to be a household name in the world of athletics, it feels as if her dreams really are coming true. Not only has she proved herself as a skier, but she completely crushed the competition. She included in a post-competition interview, “It has been more than what I had imagined. I cannot believe I’m walking out of my first Olympics with two gold medals and a silver medal. Eileen Gu, three-time Olympic medalist.”

“This unimaginable amount of viewership that I’ve been able to gain and to be able to spread this message that I’ve, kind of had forever, but to have so many people actually willing to listen and are interested in listening. It just blows my mind, I’m so honored,” she concluded.