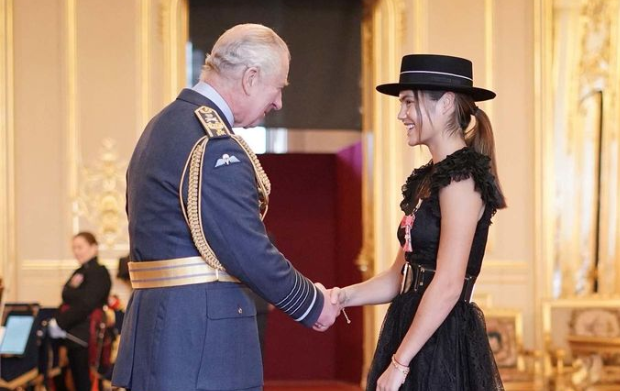 Emma Raducanu became one of the latest athletes to receive British honours on November 29th when she was named a Member of the Order of the British Empire (MBE). A ceremony was held at Windsor Castle, where she was awarded the honour by King Charles III for her excellence in the sport of tennis.

Raducanu saw her career take off in September 2021 when she won the US Open at just 18 years old. She defeated 19-year-old Leylah Fernandez in the final to become the first qualifier to ever win a Grand Slam title. She also became the first British woman to win a Grand Slam since Virginia Wade in 1977.

At the time of her being made an MBE, Raducanu was just 20 years old – meaning she still has her entire career ahead of her. Since turning pro in 2018, she has a 93-44 singles record and her highest world ranking was No. 10 – which she achieved in July 2022. She’s currently ranked No. 76 in the world.

15 Other Athletes to Receive British Honours

Every year, we see hundreds of prominent figures receive British honours for their contributions to their country and community. These people come from a wide range of backgrounds and careers – such as politicians, actors, athletes, and first responders. It’s a worthy accomplishment for anyone born in the UK.

While we honor Raducanu for her incredible achievement – at just 20 years old, nonetheless – let’s take a look at some of the other notable athletes to receive British honours in years past. Our list will include athletes from a wide range of sports including football (soccer), cricket, tennis, sailing, boxing, and more!

Pelé wasn’t born in the United Kingdom, so he couldn’t receive an actual knighthood from the Queen. He did, however, receive an honorary knighthood from Her Majesty in 1997 for his dedication to humanitarian and environmental activism – he was an ambassador to the UN and was the Brazilian Ministry of Sport.

Pelé is widely regarded as one of the greatest football (soccer) players of all-time. He scored 77 goals for Brazil’s national team between 1957 and 1971, helping them win three FIFA World Cups. He also scored more than 600 goals for Santos FC between 1956 and 1974. We will never see another player like Pelé.

In late-2004, Dame Ellen MacArthur began her quest to break the world solo record for sailing non-stop around the world. On February 7, 2005, she crossed the finish line and broke the record by more than 32 hours. She was immediately made a Dame Commander of the Order of the British Empire (DBE).

She’s one of the youngest people to ever receive the honour, doing so before turning 30 years old. In addition to becoming a Dame for her dedication to sailing, MacArthur was given the rank of Honorary Lieutenant Commander, Royal Naval Reserve. Her contribution to both sport and community are obvious.

Sir Alastair Cook has earned his right to be called a knight. As one of the greatest cricket players the country has ever seen, Cook was originally appointed an MBE in 2011. He was eventually promoted to a CBE five years later before finally being appointed a Knight Bachelor at the 2019 New Years Honours.

Cook represented England on the national side between 2006 and 2018 – he’s the country’s second most-capped player in cricket history and is a former captain. He’s the only English player to win 50 Test matches, has more Test centuries than any other English player, and holds a number of other records.

Farah was honored by Queen Elizabeth for his services to athletics. He was appointed Commander of the Order of the British Empire (CBE) in 2013 before receiving his knighthood from Her Majesty as part of the 2017 New Years Honours. He was born in Somaliland, but was trafficked to London and forced to work.

Anthony Joshua is one of the greatest boxers of this generation, despite his recent struggles against Oleksandr Usyk. Joshua was 24-1 as of December 2020, but has lost his last two fights – both vs. Usyk. Nonetheless, he’s a two-time former unified world heavyweight champion and one of England’s finest.

Harry Kane is the current captain of England’s national football (soccer) team – he also plays for Tottenham Hotspur of the Premier League. He’s currently tied for the most international goals in England history and has the second-most goals in Tottenham history – if you didn’t know, he likes to score goals.

Kane was named a Member of the Most Excellent Order of the British Empire (MBE) in 2019 after leading England to the semifinals of the World Cup and winning the tournament’s golden boot. He was presented the honour by Prince William. England’s manager, Gareth Southgate, was made an OBE that same year.

Gareth Bale is the current captain of Wales’ national football (soccer) team – he plays for Los Angeles FC of the MLS, but also has a history with Tottenham Hotspur and Real Madrid. Many experts would agree that he’s one of the best Welsh players of all-time and one of the best wingers in the world today.

Bale was appointed a Member of the Order of the British Empire (MBE) as part of Queen Elizabeth II’s Birthday Honours List in 2022. He was being honored for both his services in football and charity. During the COVID-19 pandemic, Bale donated €1 million to hospitals across his home country and in Spain.

Rory McIlroy is currently the No. 1 ranked golfer in the world and has now held that title for 114 total weeks since turning pro in 2007. He has 35 professional wins under his belt, four major championships, and three FedEx Championships. He was born in Northern Ireland and represents his hometown well.

McIlroy was named a Member of the Order of the British Empire (MBE) in 2012 after winning the 2011 US Open in record fashion – 16-under. “I am delighted to be named in the Queen’s New Year Honours list. It is quite humbling to be included in such a list of worthy recipients,” the 22-year-old said at the time.

David Beckham is one of the most iconic and legendary footballers of his generation. He is widely known for winning titles in four different countries – including Spain, the US, France, and England. He scored 17 goals in 115 appearances for England’s national team between 1996 and 2009 – he was fun to watch.

Beckham was recognized as an Officer of the Order of the British Empire (OBE) in November 2003 – one day after scoring a goal for Real Madrid in what became a signature free kick. “This is probably the best I’ve received so far. It’s an amazing day for me,” the footballer said of his accomplishment, at the time.

Marcus Rashford is a current forward for England’s national team and has been since 2016 – he also plays for Manchester United of the Premier League. In 51 international appearances for England, Rashford has scored 15 goals, but don’t worry, he still has a lot more to give at just 25 years old.

Rashford was recognized as a Member of the Order of the British Empire (MBE) in 2021 for his dedication to helping vulnerable children during the COVID-19 pandemic – he was just 24 years old at the time. “Thank you for making the day so special for me and mum. Very proud,” he said, with his mother in attendance.

Jessica Ennis-Hill is a former track-and-field athlete who specialized in the 100m hurdles, heptathlon, and pentathlon. She won a gold medal at the 2012 Olympics and silver medal at the 2016 Olympics – she also won three gold medals at the World Championships. She now runs fitness and women’s health apps.

In 2017, Ennis-Hill was recognized as a Dame Commander of the Order of the British Empire (DBE) as part of the New Years Honours list. She will forever be remembered as the poster child for England athletics at the 2012 Olympics and was known for her competitiveness and unwillingness to quit.

Holmes has been recognized as a Dame Commander of the Order of the British Empire (DBE) since 2005 – the same year she retired from sport. She was also appointed Honorary Colonel of the Royal Armoured Corps Training Regiment in 2018 and is quite the accomplished motivational speaker today.

Sir Alex Ferguson is one of the most iconic and legendary football (soccer) managers of all-time, best known for his time with Manchester United between 1986 and 2013. He won 38 trophies with the club and has more trophies than any other manager in football history. There’s no denying his legacy in the sport.

Sir Andy Murray is one of the greatest tennis players to hail from Great Britain, turning pro in 2005 and earning a 717-232 singles record ever since. He has won 48 singles titles and three Grand Slam titles during his career, spending a strong majority of 2008 through 2017 ranked top-ten in the entire world.

Sir Lewis Hamilton is one of the greatest Formula 1 racers of all-time – and he has no plans of stopping anytime soon. He currently races for Mercedes and has won seven World Drivers’ Championship titles since joining the league in 2007. He also has the most wins, poles, podiums, and so much more.

Hamilton received his knighthood in 2021 after winning his seventh World Championship in 2020 – tying a record held by Michael Schumacher. He was originally made a Member of the Order of the British Empire (MBE) in 2009 following his first World Championship win in 2008. Can he win his eighth title?

Have Athletes Ever Refused British Honours?

Being made a knight, dame, CBE, OBE, MBE, or BEM is a major accomplishment in the United Kingdom, but not everyone nominated feels the same way. In fact, there have been a wide range of people to refuse their British honours – athletes included – due to personal, political, categorical, or historical reasons.

For example, Howard Gayle refused his nomination for MBE because “it would be a betrayal to all the Africans who have lost their lives, or who suffered as a result of Empire.” Gayle was born in England, but was of African descent and felt his ‘ancestors would be turning in their graves’ if he accepted the MBE.

YOU MAY ALSO LIKE: Athletes With Clothing Brands You Need to Check Out