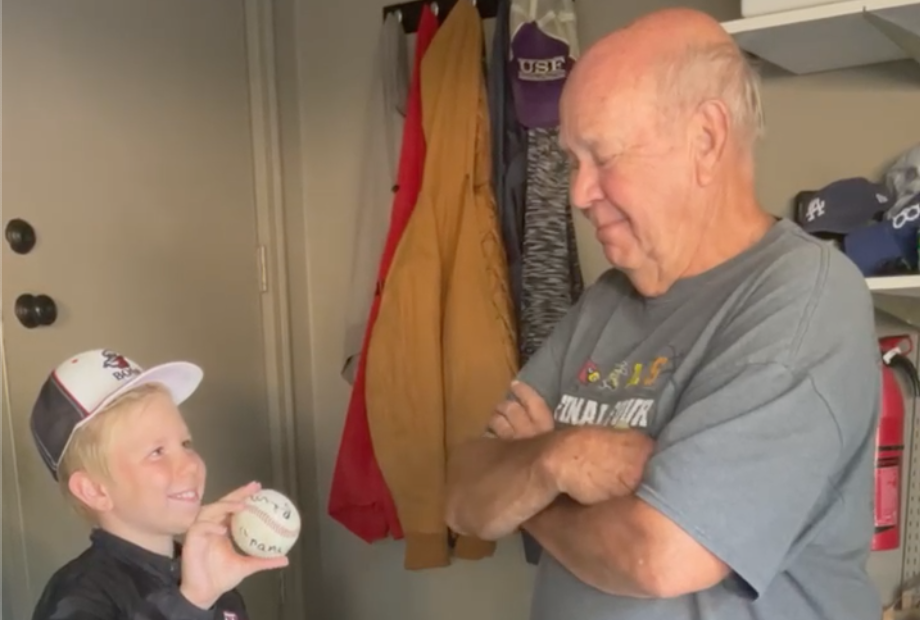 When nine-year-old Felix Carrier-Damon hit the first home run of his baseball career, he touched the hearts of not only his grandpa but the world.

The South Dakota-based boy has been playing baseball since the age of four and just began playing for a traveling baseball team in Sioux Falls. During one of his most recent games, the elementary schooler hit his first-ever grand slam, which is a moment his family will surely never forget.

Following the big day, Carrier-Damon autographed a baseball as a gift to his grandfather, whom he calls Papa. Melissa Carrier-Damon, the mother of the 3rd grader, filmed her son gifting his grandfather and the 36-second clip caught the attention of fans all around the world.

“I signed the ball for you and it says ‘Papa I love you,'” Felix tells his grandpa, Bruce Carrier, in the video. When Carrier questions why he would do such a thing, the child responds with no hesitation, “Because you taught me everything about baseball.”

The boy was quickly wrapped into an all-engulfing hug by his grandfather, who appeared to be crying tears of happiness. The emotional video has garnered thousands of views, to which Felix’s mom said, “I had no idea what that little video would do.”

This so-called “little video” brought the Carrier-Damon family to multiple notable talk shows, such as Good Morning America and USA Today. When sitting down with the media outlets, Carrier didn’t feel the need to defend his strong-felt emotions.

In fact, Carrier, who is a former college basketball coach at the University of Missouri, Kansas City, and at Huron College in South Dakota, relayed that watching his grandson accomplish a homerun was a memory for the books. Moreover, to be able to share the special moment with his grandson was all the more heartwarming.

“He shot it down left field … and it started rolling down to the fence and he kept running, running, running,” the grandfather recalled. “You get two home runs inside the park as a third grader, to me that’s exciting. I was so happy for him.”

“I got emotional. I’m not ashamed of it at all,” Carrier continued, defending his viral response. “He gave me something to be part of his day. To share that day with him. … That was awesome.”