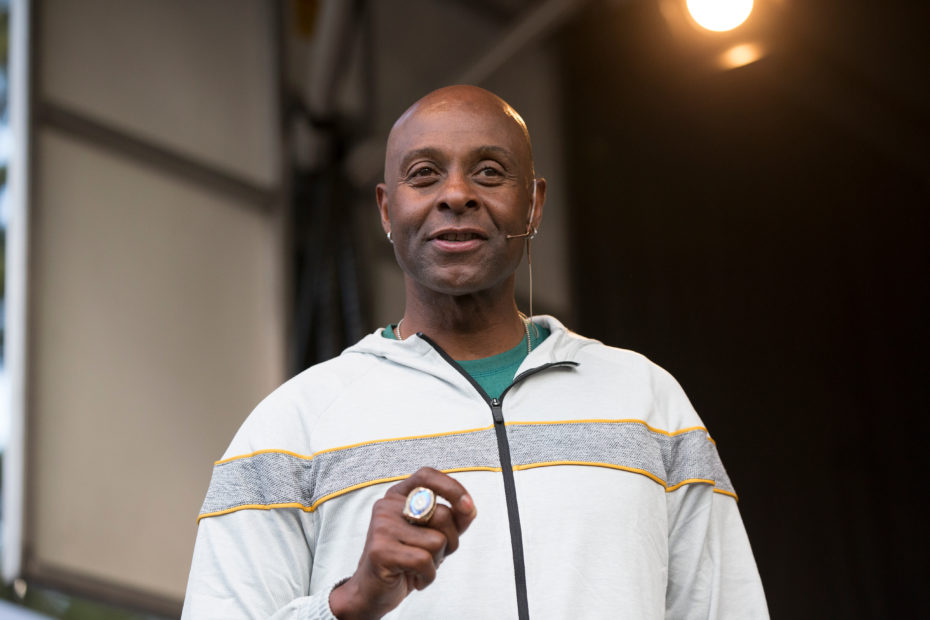 20 Football Records That May Never Be Broken

With so many talented players in the league today, you never truly know how long football records will stand for. It seems like football records are being broken on a weekly basis and it’s what makes the modern game so exciting to watch — you never know what you’ll witness.

Just last weekend, we witnessed Tom Brady make history (again) by passing Drew Brees as the all-time record holder for most career passing yards — as well as becoming just the fourth quarterback in NFL history to defeat all 32 franchises at least once with his win over the Patriots.

As an NFL fan, you’re constantly on ‘record watch’ as you await your opportunity to witness history in the making. There’s nothing more exciting than watching football records crumble — especially long-standing ones — so you can tell your grandkids you were there to see it all.

RELATED: 20 Basketball Records That Are Hard to Break

What Football Records Are the Hardest to Break?

At the start of the 2021-22 season, we knew it was only a matter of time before Tom Brady broke Drew Brees’ record. We saw it coming and it was something we expected to happen. While it was still exciting to witness, it was a record we all knew was breakable this year.

That’s not what brings us here today. We’re not here to look at football records we know will break someday. Instead, we’re pondering over some football records that may never be broken — the untouchables, unreachables, impalpables, inaccessibles, and sacred football records.

These are the football records that aren’t going to be easy to break. If they ever are broken, it would take an incredible career or amazing performance on the field by an extremely talented player. Without further ado, let’s take a look at some of the hardest-to-break football records.

19. Most Pro Bowl Selections for a Tight End

Tony Gonzalez is the greatest tight end to ever play and it’s evidenced by his 14 Pro Bowl selections. Not only is that currently tied for the record and will likely be broken at some point, it definitely won’t be broken by another tight end. For reference, Travis Kelce has six selections.

No other kicker has had a career like Adam Vinatieri. He played for 24 seasons — 10 with the Patriots and 14 with the Colts — and made 599 field goals in his career. Not only is that 34 more than any other kicker, but it’s 196 more than any active player in the NFL (Robbie Gould).

17. Most Receiving Touchdowns in a Single Season

Randy Moss was a one-of-a-kind wide receiver and will go down as the second best wide receiver to ever play. His 23 receiving touchdowns in 2007 is a record that still stands today. Davante Adams came ‘close’ to breaking it in 2020 when he finished with 18 touchdowns.

Ray Lewis is regarded as the best linebacker to ever play. He’s one of only two players to ever record more than 2,000 career tackles — London Fletcher being the other. Lewis’ 2,059 career tackles is nearly 800 more than any active player in the NFL right now (Bobby Wagner).

15. Most Interceptions by a Team in a Single Season

During the 1961 season, the San Diego Chargers recorded 49 interceptions as a team. They had 12 different players record at least one interception and were led by Charlie McNeil with 9 interceptions. Over the past decade, the most was 31 interceptions by the Green Bay Packers.

14. Most Touchdowns in a Single Season

What LaDainian Tomlinson was able to do in the 2006 season was nothing short of incredible. His 31 total touchdowns — 28 rushing, 3 receiving — is more than any other non-quarterback in NFL history. For reference, Alvin Kamara’s career-high is 21, which he achieved in 2020.

13. Most Sacks by a Team in a Single Season

No defense brought more fear to an opposing quarterback than the 1984 Chicago Bears. Their 72 sacks is the most by any team in NFL history in a single season. They were led by Richard Dent (17.5 sacks), Dan Hampton (11.5 sacks), and Steve McMichael (10.0 sacks).

No other quarterback in NFL history has thrown more interceptions than Brett Favre, but he’s also one of the greatest to ever play. If a quarterback were to throw as many interceptions as Brett Favre in today’s NFL, they would struggle to remain a starter and would likely be replaced.

11. Most Career Passing Yards in the Playoffs

It’s hard to imagine another player having as illustrious of a career in the playoffs than Tom Brady. His 20-year dominance with the New England Patriots isn’t something that will happen again and it’s not likely we see another quarterback throw for 12,449 yards in the playoffs alone.

Paul Krause was a threat to intercept the ball every time a quarterback dropped back to pass. His 81 career interceptions won’t be passed anytime soon — if ever. The most interceptions by an active player is Richard Sherman with 36 interceptions — 45 less than Krause’s record.

9. Most Consecutive Losses in a Super Bowl

No running back has ever rushed for more career yards than Emmitt Smith. His 18,355 rushing yards very well may be one of the most difficult football records to break in NFL history. Frank Gore currently has 16,000 rushing yards and Adrian Peterson has 14,820 rushing yards.

7. Most Consecutive Starts by a Quarterback

We’ve already mentioned one unbreakable record by Brett Favre, but we’re not done with him just yet. He also owns the record for most consecutive starts by a quarterback at 321 starts — 297 regular season and 24 playoffs. Russell Wilson currently has 164 consecutive starts.

The 1940 Chicago Bears finished their season in the best possible way. Not only did they shutout the Washington Redskins in the NFL Championship game, but they beat them by a score of 73-0. It’s the largest margin of victory in NFL history and likely won’t be bested.

Jerry Rice has nearly 5,400 more receiving yards than any other receiver in NFL history, which is a true testament to just how dominant he was. Julio Jones has the most of any active player (other than Larry Fitzgerald) with 13,100 receiving yards — almost 10,000 less than Rice.

Running backs are asked to absorb a lot of tackles, which is why most running backs don’t last too long in the NFL. That’s not the case with Emmitt Smith. His 4,409 rushing attempts is nearly 600 more attempts than the next closest. For reference, Frank Gore has 3,735 attempts.

2. Most Consecutive Extra Points Made

This will go down as one of the hardest football records to break. Stephen Gostkowski made 523 consecutive extra point attempts from 2006-2016. Since the NFL pushed the extra point attempt back 15 yards, it only makes the record harder to break by future kickers.

1. Most Super Bowls by a Player

Tom Brady will go down as one of the most dominant players to ever play the game. His 7 Super Bowl victories are not only more than any other player in NFL history, it’s more than any other NFL franchise. Who knows if we’ll ever see anyone beat that record, especially a QB.

Will We Ever See These Football Records Broken?

In order to beat any of the football records above, you either have to turn in an amazing season-long performance or an incredible and long career. That’s not always easy, especially considering how physical the game of football is and how often we see injuries in the NFL.

YOU MAY ALSO LIKE: 30 of the Best Sports Logos Ever

While we likely won’t see any of these records broken in the near future, there are plenty of football records that will be broken. It seems to be a common occurrence in today’s NFL. Fans of the game are constantly on ‘record watch’ and that won’t be changing anytime soon.